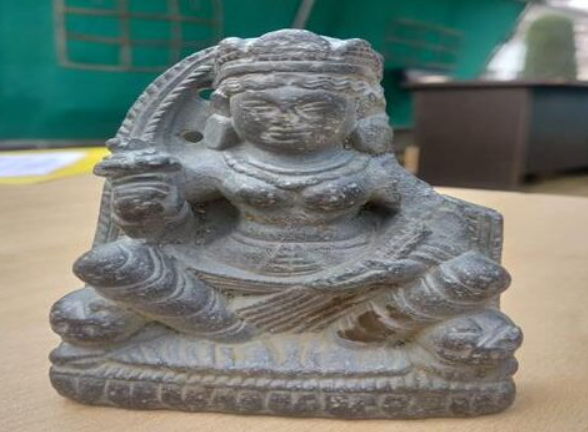 Budgam, November 30: Police on Tuesday recovered an ancient sculpture of the goddess Durga in the Khag area of â€‹â€‹Kashmir’s Budgam district.

This is the second sculpture that police have recovered from the neighborhood in the past three months.

According to officials, the sculpture depicts the goddess Durga which dates back to roughly AD 7th (around 1300 years). The sculpture is carved from a black stone.

According to a statement released by the police, the sculpture depicts the goddess Durga sitting on a lion’s throne, the left side of the arm is absent from the shoulder, the sculpture has the influence of the Gandhara art school and the hand right holds a lotus.

â€œA team from the J&K Government Archives, Archeology and Museums Department was called in to examine the recovered sculpture and said recovered sculpture was handed over to Mushtaq Ahmad Beigh, Deputy Director of the Archives, Archeology and of the J&K Government museums and its team by Tahir. Saleem Khan SSP Budgam in the presence of Naeem Wani-JKPS DySP Hqrs Budgam and other police / civilian officers through appropriate delivery / care, â€the statement said.

Relevantly, a sculpture of the goddess Durga, believed to be nearly 1,300 years old, was recovered by police in Budgam district on August 30. The statuette was then handed over to the Department of Archives, Archeology and Museums.