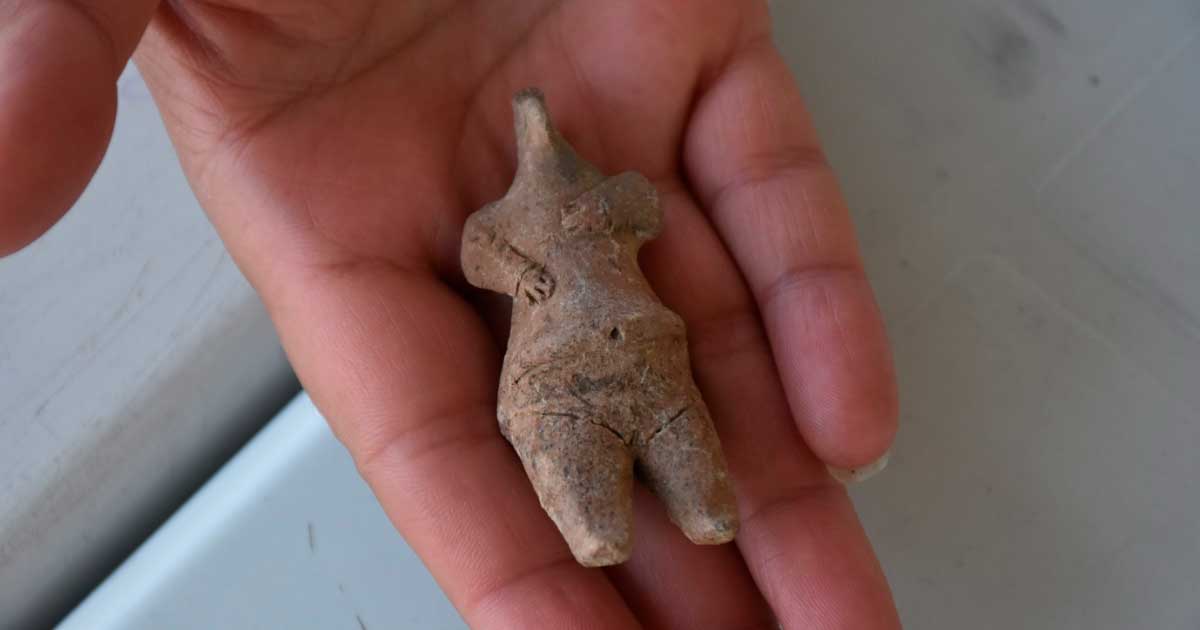 One of the largest and oldest Neolithic sites found in what is now Turkey yielded another interesting find – a clay statuette of a female figurine was unearthed in Izmir, dated to is 7800 years old. The discovery, made in the Ulucak Höyük or Ulucak Mound, one of the oldest sites in western Anatolia, located in the Kemalpasa district of the western Turkish province. It has been described as “a very rare piece”, possibly used in important life and death rituals.

The feminine mystic and the tumulus of Ulucak

The female figurine is believed to be used in fertility rituals and prayers to the divine for a good harvest. What is interesting is that previously such figurines have been discovered discarded in ancient garbage, indicating that they were not sacred, but used for ceremony and their usefulness was probably exhausted.

According to archaeologists working at the site, the female figurine could have been used in birth and death rituals, and even potentially as totems of magic, but further research is needed to determine the usefulness of this particular figurine.

Director of excavations and professor of the University of Trakya, professor. Dr Özlem Çevik, who took charge in 2009, said that:

“During the excavation of a house this year, we found a complete female figurine made of clay. We have already identified such figurines… But we usually find them broken. This figurine is important for us because it is the third complete figurine we have ever found at Ulucak Mound. It is a very rare work.”

An ancient site in Western Anatolia

The mound, which has been excavated since the mid-1990s, is 8,850 years old. It would be the first discovery of the year, according to Turkish official media, Anadolu Agency . It was supported by the Turkish Ministry of Culture and Tourism, Izmir Metropolitan Municipality, Kemalpaşa Municipality and Kemalpaşa Organized Industrial Zone, all keen to contribute to the recognition of the region’s cultural heritage.

This takes on even more significance when you consider that Ulucak Mound was home to the first farmers in the Aegean region. In fact, the first settlers here built their houses on top of each other along the 7.5 meter (24.6 ft) cultural layer. Here they settled for almost 1,200 years without interruption, leaving behind precious traces of their existence.

Three distinct layers of human existence have been identified on the mound, reports Arkeo News . These include the Late Roman period and Early Byzantine settlements, the Early Bronze Age layers stacked below, and then the Late Neolithic settlements at the bottom. In these excavations, ceramic pots, ganister tools, stone weapons, mother goddess figurines and anthropomorphic pots were unearthed, exhibited in the Archaeological Museum of Izmir.

From Fortune to Raw Brick: First Colonies and Human Coexistence

Another colleague from the excavation, Professor Dr Agile, said: “With the excavations of Ulucak Mound, not only Izmir but also Western Anatolia was inhabited 8,850 years ago. These excavations are significant because they trace the history of Izmir back to more than 8,500 years ago.

The region is located on a fertile plain – a key location. The stratum of the first settlers reveals that it was then continuously inhabited for 1150 years. It is also important to show how the early farmers of Izmir were transformed in terms of settlement and society after settling. Architecturally, the first houses were built with the fence and mud technique.

Many layers of excavations have taken place at Ulucak Höyük. (Kemelpasa District Governorate)

He elaborated on this by explaining that in this very early period of sedentary human history, the transition was already underway to adapt to a “structure of high intimacy”. Makeshift architecture now paved the way for mudbrick architecture with stone foundations, signaling an intention to stay, rather than move after some time.

This was followed by the advent of courtyards, structures that allowed human beings in small settlements and communities to come together. The congregation was what made it possible to celebrate certain events, rituals and festivals.

The walls are knocked down and streets are set up which create a demarcation between the different dwellings, without the need for a notion of private property. As the transition to a public and communal configuration occurred, at the same time there was also enormous scope for privacy that articulated through the emerging architectural style. This has been one of the main takeaways from the current discovery.

This Old Thing: Risky lighter design based on mythology