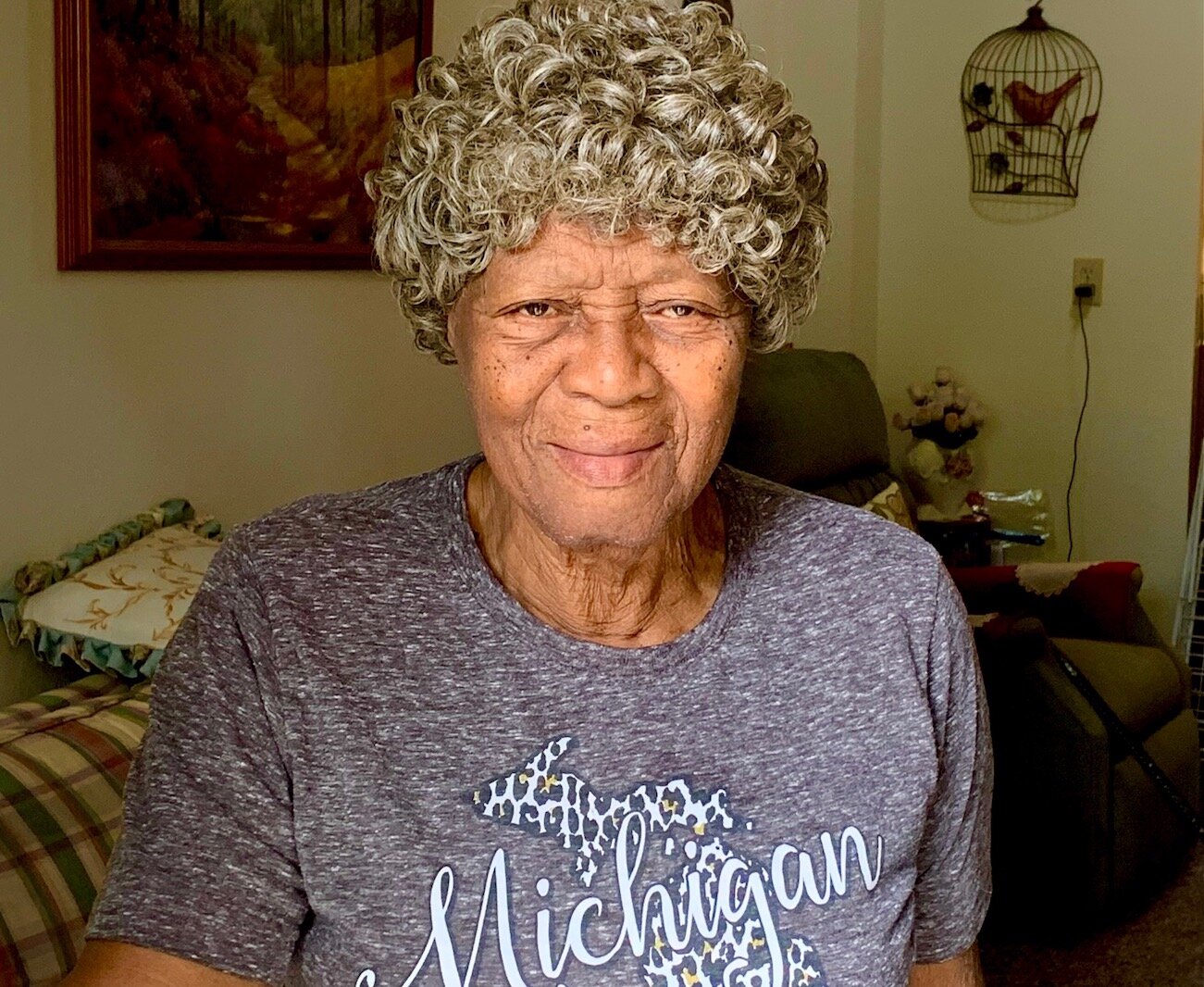 After nearly 50 years with extended family, this grandmother finally has a room to herself in Kalamazoo

By Heather J. Nicoletti Last updated Aug 4, 2022
Share
A Path Home — Housing Solutions: This story is part of Southwest Michigan’s Second Wave series on solutions to homelessness and ways to increase affordable housing. It is made possible by a coalition of funders including the City of Kalamazoo, Kalamazoo County, ENNA Foundation, Kalamazoo County Land Bank and LISC.

Family means everything to Katherine White.

In 1973, she and her husband moved to Kalamazoo from Brookhaven, Miss., to have a better life here and make it their home.

He found a job with a local auto parts manufacturer. She found work as a caregiver at a local nursing home.

After that, she worked for several years at Borgess Medical Center cleaning surgical instruments, then worked as a student aide in public schools in Kalamazoo. She retired from KPS about nine years ago. She will be 85 in July.

During her years here, she and her husband, Robert “RP” White, raised two sons and two daughters. They, in turn, became parents to a total of 10 children. And they, in turn, became the parents of 10 more. The whites made them a home, from the oldest to the youngest. And at various times over most of the past 49 years, that has meant living with a daughter, a son, grandchildren, great-grandchildren, and various combinations of all of those.

Katherine White White stands inside the first home she’s had all to herself in nearly 50 years.White’s family life was therefore a long series of apartment rentals, mostly in the Northside neighborhood of Kalamazoo. Among them, she recalls that she and her family lived for about four years on North Edwards Street, then moved to North Park Street and lived there for seven or eight years. She moved from there to Jefferson Street when she separated from her husband about 12 years ago. At that time, she lived for about 18 months with her youngest daughter, who was living on her own.

From there she moved to an apartment building on North Burdick Street and lived there for about two years. All the while, and at each stop, she shared her space with her family members. Her husband Robert died about eight years ago.

Social services and housing professionals say it is not unusual for struggling families and different cultures to live with extended family members.

“You just know it exists in Edison and other neighborhoods as well,” Tammy Taylor says of extended families living together.

Katherine White relaxes on a recent afternoon at her Kalamazoo apartment.As executive director of the Edison Neighborhood Association for 21 years before stepping down from that position at the end of 2021, Taylor championed residents of what is considered the most diverse mix of households in the city of Kalamazoo, in terms of ethnicity and economy. This neighborhood is approximately 40% white, 28% African American, and 19% Hispanic.

For some people, she says, who live with many family members, “It’s kind of part of the culture.”

Kathy White recalls living, at one point, in a one-bedroom apartment on Vine Street “and I had seven children who lived in that one-bedroom apartment”. They were grandchildren and great-grandchildren who came to live with her because of the lifestyle of their mothers, who were sometimes involved in drugs or in trouble with the authorities, she says.

“It was tough,” she says. “It was really hard. You go to sleep with them (kids) on the floor or whatever, and you wake up with them the same way.

The placemats in Katherine White’s apartment really seem to fit her life with her kids, grandkids and great-grandkidsThe seven children ranged in age from four weeks to 12 years old. The teenager was the only one of school age. How did she get him there while watching the others? She says a woman who lived in an adjacent apartment was a big help. And, “I made him go to bed early and I would get him up early.”

“There were three of us in a bed,” she says of the youngest children at the time, with the baby in a crib.

And somewhere in the mix of all this living and sharing, she and her husband were foster parents to four other youngsters, two at a time.

“What can I say, I love kids,” White laughs.

Patrese Griffin says it’s not unusual for extended family members to live together here “especially with our housing situation as it is”.

Taylor agrees, saying, “There are several cultures where families stay together and support each other and take care of the elderly and that sort of thing. In some cases, it’s survival. (There are parents who say, ‘I don’t want my baby or my grandchild to live on the streets and they can’t afford to get by on their own.’”

The Crosstown Parkway Apartments in Kalamazoo.Griffin was named the Kalamazoo County Continuum of Care Director earlier this year after serving as Vice Mayor of the City of Kalamazoo, where she championed the passage in 2020 of a new fair/anti-fair housing ordinance. – discrimination at the city level.

It is estimated that rental units in the Greater Kalamazoo area are over 90% occupied, making it difficult to find suitable accommodation. And while housing prices, rental rates and home construction costs have risen steadily, wages for average workers have not increased.

“When you add up all of those factors, there’s an incredible number of people that you would consider doubling down on, if you will, in our community,” Griffin says. “It’s a common story for a lot of people and a story that isn’t told as often, especially when it comes to housing.”

Griffin is among fair housing advocates who worry about how some middle-to-low income people will survive as a two-year influx of federal and state financial aid and rent subsidies – to help those affected by the COVID-19 pandemic – is coming to an end.

In the meantime, she says, it’s not uncommon for African American families, who have historically faced discriminatory and discriminatory housing practices that limited housing options, to live out of necessity in larger family groups.

Taylor says, “It’s everywhere, especially now with the housing shortage. And she says, “During the pandemic, people lost their jobs and they had to double down, so to speak, to make ends meet.”

atherine White has found a home at Crosstown Apartments, which caters to seniors.White remembers the last place she lived with her extended family, 744 Douglas Ave. She lived there for about six years before falling ill and being hospitalized. After being released in July 2021, she became a resident of Crosstown Parkway Apartments, a seniors’ apartment building located at 550 W. Crosstown Parkway in Kalamazoo. And after nearly 50 years, she has the place, a one-bedroom apartment, all to herself.

ISAAC lawyers have been very helpful, she says. Interfaith Strategy for Advocacy & Action in the Community is a faith-based organization that, among other things, supports education, early childhood development, safe transportation, and affordable housing.

The rent for White’s apartment building is federally subsidized, allowing many seniors to pay no more than 30% of their annual income. As a result, she pays about $330 a month, using income from her Kalamazoo Public Schools Superannuation.

What’s it like to have an apartment all to herself?

Is there a downside?

She says she often misses the hustle and bustle of being around younger family members, which involves cooking, cleaning and caring. Her youngest great-grandchild is now about 5 years old, she said. And she often sleeps on the sofa in the living room, rather than in a big bed she has for herself. She laughs as she acknowledges that it still doesn’t quite suit her and that it’s hard to stop living a compact life.

White says she always wanted to own her own home. But she was still reluctant to buy, thinking she might one day return to Mississippi. But now she is more than happy to now have her own space.

“I prayed a lot and I love my family,” White says. Speaking of the years she spent housing her children and grandchildren, she says, “I was the only one who could. So I just prayed.

What’s the best part of having your own home?

“It’s easier for me to keep it clean,” she said with a smile. “And I don’t have to worry about waking up to take the kids to school.”