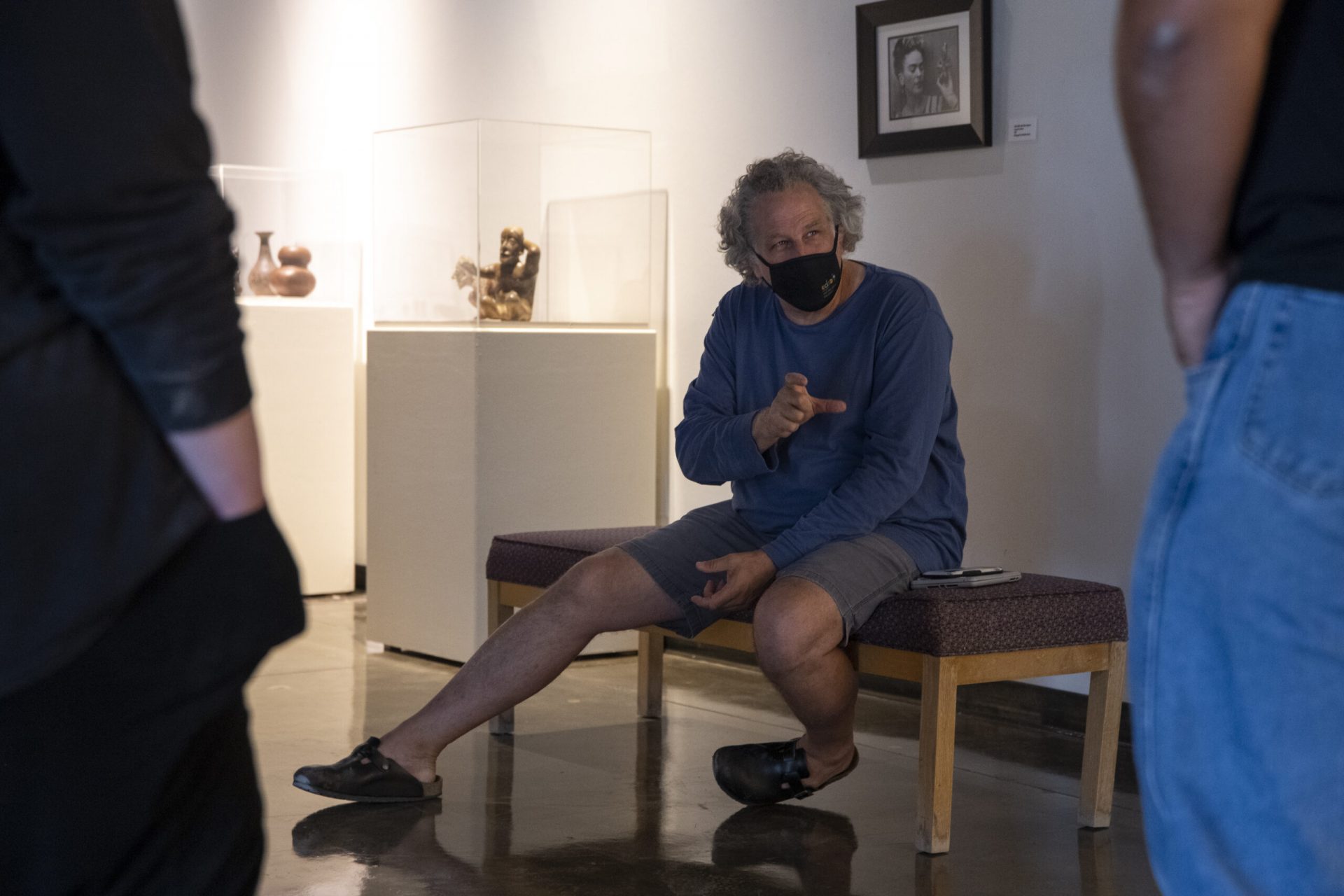 An educator presents the collection of figurines to the public

â€œUnderstanding the Past: The Transcendent Incarnation of Ancient Mexican Artâ€ is now on display at the Nancy Fyfe Cardozier Gallery at the University of Texas Permian Basin.

Owned by Jason Osborne, Ector County ISD’s director of innovation, it features around 100 clay figures. They will be on display until November 4.

Gallery director Amy Kim wrote in a booklet about the exhibition that it consists primarily of two groups of artwork: selections from the early formative period (1200-900 BCE) , works of art by and influenced by Tlatico (now Mexico City) and works from western Mexico (300 BCE-350 CE).

Associate art professor Chris Stanley, who is also a member of the ECISD board, brought some of his students to view the artifacts and ask questions of Osborne.

â€œâ€¦ He’s what we call a polymath, so his intelligence is in so many different areas. He was hired by our school district to help us enter the 21st century. He’s fascinated by everythingâ€¦ â€said Stanley.

One of the things Osborne does is collect items like art and tools.

â€œâ€¦ From what I know of this, he has become absolutely obsessed with these cultures which are kind of forgotten,â€ Stanley said.

The late actor Vincent Price owned some of these numbers and allowed them to be used in advertisements for KahlÃºa coffee liqueur.

People thought that if Price liked the artifacts, they would like to have them, too, Stanley said.

â€œâ€¦ The more popular an artifact and the more available it is, the more people will want it. And then with that came the counterfeits. â€¦ â€Said Stanley.

Osborne said the counterfeiters will try to mimic the mineral efflorescence on the clay, so museums should have experts who can determine whether this is true or false.

When he first moved to Texas, Osborne said he was intrigued by Mexico because he had never lived so close to it before.

â€œâ€¦ At the time, I had never been to Mexico so I was very curious because since I was little, I was very curious about anthropology and paleontology, and just about research in general. â€¦ Shortly after arriving in Texas, I gained access to an 800,000 acre ranch in northern Mexico in the Chihuahuan Mountains. â€¦ Much of it was unexplored, untouched. â€¦ There are several goat branches in this property, so I was in these mountains and saw undocumented petroglyphs and things that have been in place for thousands of years. I started doing more and more research in Mexico and was really interested in some of the early civilizationsâ€¦ some of which are what you see here in this exhibit and these tombs and well tomb art pieces. Every piece that is here comes either from a grave or from a well grave; two different things. You think of a grave or a grave as a covered open area, as opposed to a well grave, which is lowered into a well, â€Osborne said.

Egyptian tombs were similar and existed in two different parts of the world.

From a research standpoint, Osborne said he was interested in the genetic traits of the art itself and the people who live in these fields today.

â€œâ€¦ The only thing left to study is the pieces themselves and what they left behind,â€ he added.

As the plays grew in popularity, Hollywood started repeating some of these plays in the 1950s.

Due to demand, there have been more funeral raids in Mexico.

â€œâ€¦ It was legal to continue this process and we were able to do so until about 1973, when the UNESCO agreement was reached,â€ Osborne said. â€œEvery item that is here is part of the UNESCO agreement. They were all collected and kept, most before 1960, or more in the 1950s and 1960s. Another thing I really made sure of was that the provenance of the pieces wasâ€¦ legal to obtain and that ‘there was documentation about it. And then I can bring it and put it together to educate people, â€he added.

Osborne said he has done a lot of work in paleontology and has always been interested in finding things and discovering.

In his work with ECISD, Osborne said he pays great attention to the education of tomorrow, what can be done to promote the careers of tomorrow and how they can partner with people outside of the world. district to provide opportunities for students that will ultimately prepare them for success.

â€œWe believe the innovation approach, or the innovative approach, of the way we do education,â€ Osborne said. â€œI spent a lot of time researching and thinking about new ways to bring really good things to students to get them excited about education. We recently started with a neuroscience class where kids are in virtual reality. We solve the mysteries of the brain in partnership with seven universities. “

It works with 26 universities, but seven in a single classroom.

Ed O’Bannon, an arts minor, said seeing the figurines was artistically and historically interesting in how it connects to anthropology and “just the story of connecting cultures and see how relevant it is today; some of the techniques still in use.

â€œI think it’s pretty fascinating how timeless some things are, especially in art and history has a way of repeating itself,â€ O’Bannon said.

Jonathan Pallanes, a senior at UTPB, said he liked the physical characteristics of the figures “like the eyes and their tilt”.

â€œOddly enough, I like to look at some of these ancient artifacts from other cultures and I have personally seen the Mayans, the Aztec temples personally. And some of those head shapes really interested me in their elongationâ€¦ â€said Pallanes.

â€œâ€¦ It’s nice to hear Mr. Osborne’s point of view and to have the context,â€ said Fierro. â€œI think it makes the artwork a lot more meaningful. At the same time, here we are a ceramics class of non-artistic students and I think, having already been working with ceramics and learning the different techniques, I look at it with a completely different perspectiveâ€¦ This n This is not my first exhibition to see ceramic pieces, but I think that having taken this course and also having the personal experience of hearing Mr. Osborne is more meaningful.

Osborne said he acquired the pieces primarily through auction houses and is trying to piece them together for a more organized collection that “made more sense than just random pieces, so it’s very focused. “.

Having it at the Nancy Fyfe Cardozier Gallery, he said, is a perfect opportunity to showcase the collection to students and the community.

When he was in paleontology, Osborne said, so often things were buried and stored in the archives and people never got the chance to see and touch them.

â€œSo to have the opportunity to do this is huge and to have a firm belief in education and an understanding of our world is a great opportunityâ€¦â€ he added.

Understanding the past: the transcendent embodiment of ancient Mexican art