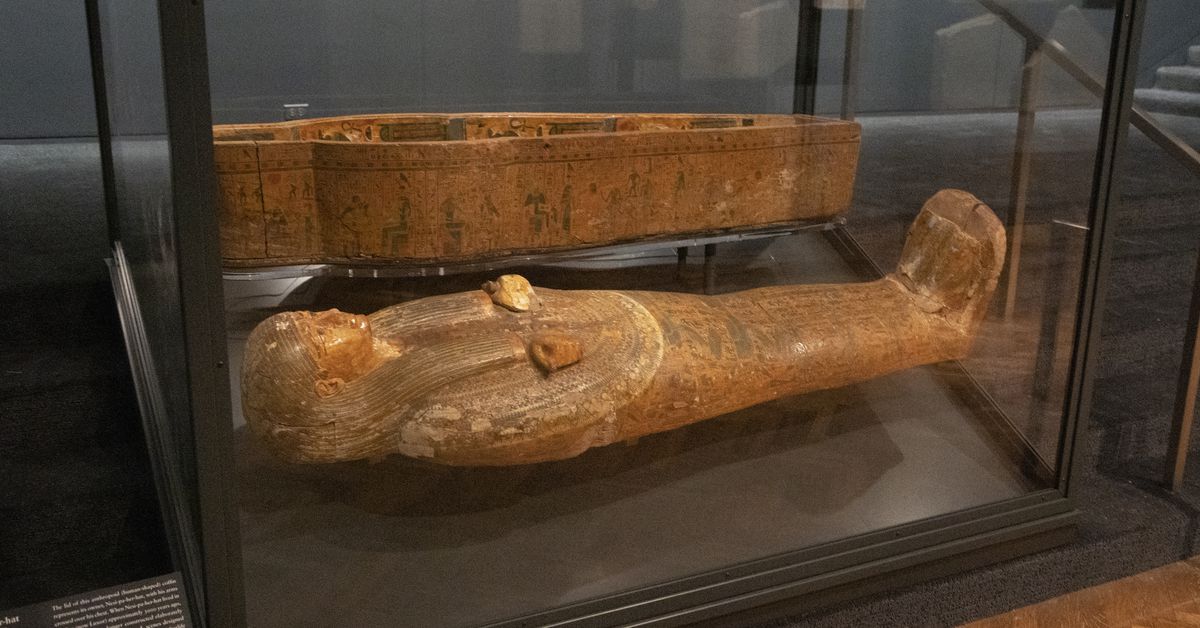 Mention ancient Egyptian art in Chicago and many people immediately think of the 23 human mummies at the Field Museum or the dramatic statue of King Tutankhamun at the Oriental Institute at the University of Chicago that stands over 16 feet tall.

Less well known is the work of this ever-popular historic estate at the Art Institute of Chicago, part of which will be on public display again on February 11 in a newly renovated lower-level space after being unseen for nearly 10 years.

“It’s a long time coming,” Ashley Arico, assistant curator of ancient Egyptian art at the Art Institute, said of the re-emergence of the works, “but we’re extremely excited to share them with visitors again. .”

While the Art Institute’s collection of approximately 1,000 objects may not be as glitzy or grand as the Field or Oriental Institute holdings, it speaks more to artistic practice and the role of art in ancient Egypt.

“It’s on the scale of a smaller collection,” Arico said, “but it has some very high quality pieces.”

She described the three Chicago-area collections as complementary. “We have worked closely with the OI and the Field throughout the decades that Egyptian art has been collected in Chicago,” she said.

Nearly 80 objects spanning 3,000 years will be displayed in the Art Institute’s new Egyptian Gallery, a 3,150-square-foot space once devoted to Islamic artworks, which are now scattered throughout other parts of the museum.

Located on the lower level under an atrium gallery that connects the Modern Wing to the American Galleries and the rest of the museum, the gallery is accessed by a pair of stairs at the eastern end of the Alsdorf Galleries.

“It’s such a central collection in the museum collections,” Arico said, “that we really wanted to make sure it had its space.”

Ancient Egyptian art is not included, as it was in the past, with Ancient Mediterranean and Byzantium art, which occupy the first floor galleries surrounding the McKinlock Court. Due to a reorganization of the museum’s departments in 2020, it has become part of the Arts of Africa, so that it can be understood in the context of the art of the rest of this vast continent.

The works in the new exhibit, titled “Life and Afterlife in Ancient Egypt,” will be organized by theme, not chronological order. Among the themes are religious practices in ancient civilization as well as how the Egyptians presented themselves in everyday life through the use of cosmetics and jewelry and how they wanted to be remembered for eternity.

“Throughout,” Arico said, “we try to emphasize that this is a very African-rooted collection.”

The anchor of the gallery will be the “Coffin of Nesi-pa-her-hat” from 1069-945 BC It was placed between the two staircases and will be displayed in an open position so that visitors can see into the 6ft brightly decorated -long piece as they descend into space.

“This one is exciting to revisit, as it hasn’t been on display at the Art Institute in over 80 years,” Arico said. “The work is very old and fragile, so it required conservation attention which we were able to support in preparation for this new installation.

Many of the Art Institute’s holdings were acquired in the late 19th and early 20th centuries, when intense archaeological excavations were underway across Egypt. “Most of the collection was here in 1920,” Arico said. “Our first piece came in 1890, making us the first museum in Chicago to start collecting ancient Egyptian artwork.”

Among the highlights of the collection is a “truly marvelous” group of what Arico called “artists’ plaques” – intricately carved limestone reliefs from the Ptolemaic period (332-30 BC). Among them are coins depicting a ram and a quail chick.

Another highlight are what the curator described as “very beautiful bronze sculptures” of gods, like a “fantastic piece” depicting Osiris, the ruler of the underworld in a kind of “mummy-like pose”. The copper alloy statuette is 10⅝ inches tall and dates from 664-332 BC.

A third force is a concentration of “stelae”, sculpted and painted stone slabs. A key example is the “Stele of Amenemhat and Hemet” from the Middle Kingdom, circa 1956-1877 BC. This limestone and pigment work, about 16⅜ inches in diameter, was probably part of a public burial chapel or funerary monument. It depicts a deceased couple with food and drink for the afterlife and includes a prayer on two sides.

Arico also highlighted the 40-inch-long “Funerary Papyrus of Tayu-henut-Mut”, which highlights a temple singer from what is now Luxor. She is shown praising the god Osiris, with text behind her from the “Book of Exit by Day”, better known today as the “Book of the Dead”.

“It’s just recently been curated and cropped,” Asogi said, “so we’re really excited for people to see it again.”

Although it was not planned that way, the gallery opens in a great year for Egyptian art – the 200th anniversary of the decipherment of hieroglyphs and the centenary of the discovery of King Tut’s tomb.