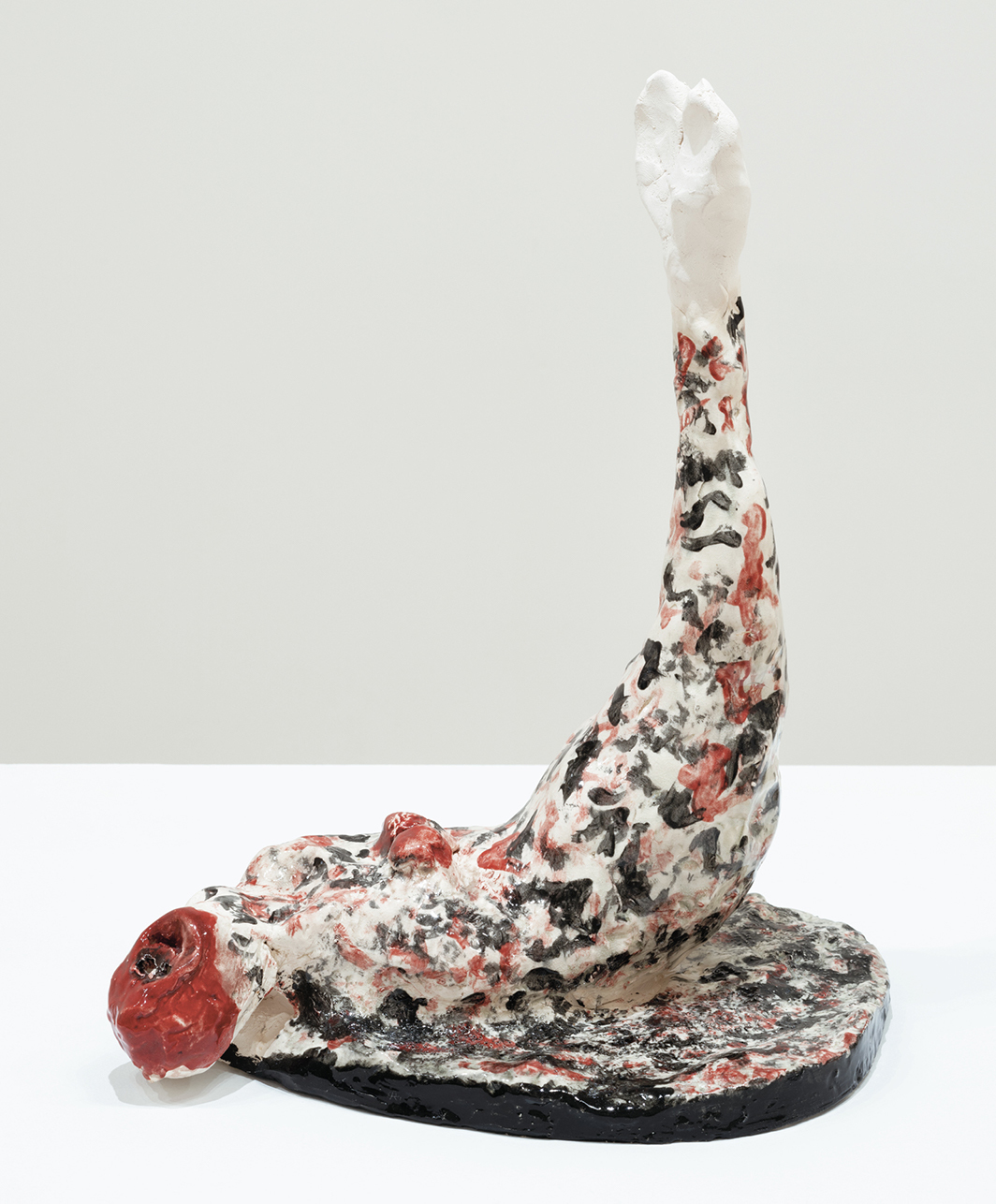 In his introduction to a new book on the work of Alice Mackler, curator Matthew Higgs urged viewers “to regard her as a” young “artist who happens to be in her eighties.” I couldn’t agree more. But the temporal paradoxes hardly stop there; she could also be seen as an ancient artist, the survivor of a lost civilization that stands among us today. The belief system underlying the artifacts of this prehistoric culture remains obscure; and the insistent and untitled designation of all of Mackler’s works suggests a staunch refusal to introduce outsiders to a body of knowledge closely tied to a secret society that may well have only one member. A viewer might guess that this society is a matriarchy – the constant refrain of Mackler’s work being the female presence, conjured up as a head or a figure.

The artist identifies as “a painter who does sculpture”, explaining: “I glaze my sculpture the same way I paint on canvas”, but in this exhibition her ceramic sculptures dominated; the paintings, with their linear forms, almost seemed to be studies of possible objects. And yet, in the sculptures themselves, Mackler skillfully used color both to emphasize and to dissolve the physical volumes. Heads and figures appeared as such mainly by decree. A bulbous, terminal-like shape would never have been identified as a head without the three circular indentations that read as eyes (filled with green glaze) and an open mouth (smeared with red). They add to a rudimentary rendering of the idea of â€‹â€‹’face’, while the surrounding black spots become signs for long hair. As simple and effective as this conjuration of an iconic face may be, it operates in tension with the obvious non-representationalism of the overall form. And this indifference to representation is underscored by numerous details, among which are the speckled red, blue and black markings that flutter around the necks of the figures, delicately smeared (as far as one can tell) for the fun of it.

A ceramic piece featured what appeared to be a mermaid lying on her back and raising her tail fin in the air. In this case, the stippling of the glaze, the rhythmic repetitions of which seem to evoke a pattern of fish scales across the seductive mermaid’s body, extends over the circular base from which she rises, as if to disavow any referential intention in favor of a purely decorative function. This ambivalence towards representation seems to operate at all levels of Mackler’s work: his evocative power seems irrepressible, and yet always secondary to a passion for ornament. In fact, if the word didn’t sound vaguely dismissive, I would emphasize the fundamentally decorative nature of these objects – their longing for accessible beauty – by calling them “figurines.”

But what about that feeling I mentioned, that Mackler’s sculptures know more than they say, that they might be tied to an underlying myth whose content remains unspoken? Perhaps all the decorative forms, at their core, are reminiscences of the deepest and most vague aspirations of society. Does Mackler’s True Desire For A World Only For Women? In a rare interview, she admitted that in her art, a male model would always transform into something else: â€œI can’t tell a man from a woman, look at the shapes, it’s all the same! Mackler’s work predicts or recalls a utopia where sexual difference subsides in an eternal feminine. Or perhaps he is simply reveling in this infinite malleability of form and meaning, of which clay is a key word, a material persistence that underlies all his metamorphoses.

Four artists whose work you have just seen