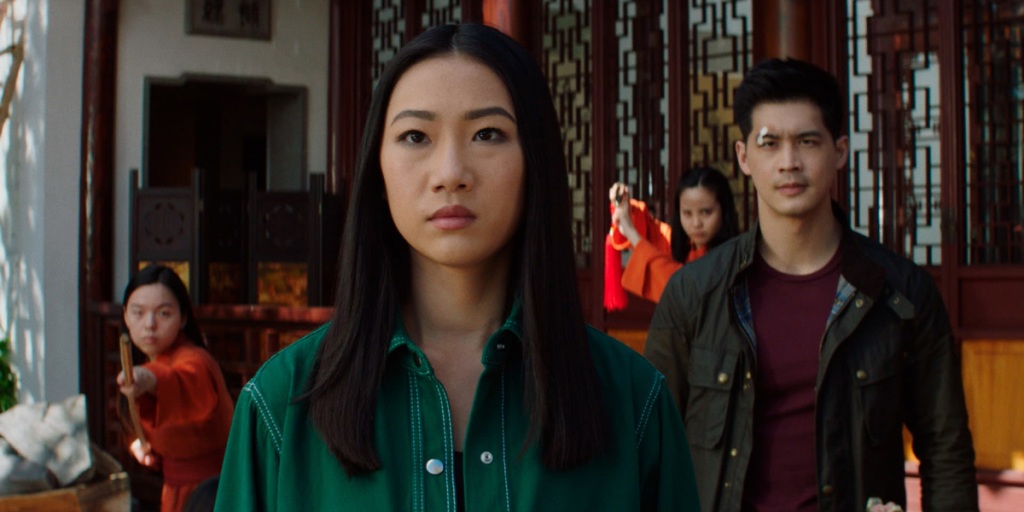 SPOILER ALERT: The message below contains details of the Kung Fu Finale of the first season, “Transformation”.

For Kung Fu first season, all roads lead to Shaolin Monastery. Written by showrunners Christina M. Kim and Robert Berens, the end of the season brings Nicky (Olivia Liang) and Zhilan (Yvonne Chapman) back to the battlefields of their first meeting to gain access to the former forge of bian ge, the ubiquitous force that powers ancient Warrior weapons.

Upon learning that his enemy has stationed armed forces outside his family’s home in San Francisco, where the Shen are preparing for Althea (Shannon Dang) and Dennis (Tony Chung) ‘s marriage tea ceremony, Nicky helps Zhilan to unlock the puzzle-filled door of the forge. . Opponents notice that the forge lacks the coveted energy and learn that a wizard has taken the source of bian ge in a secret refuge mentioned once by sifu Pei-Ling (Vanessa Kai).

“Legends Of The Hidden Temple”: Dee Bradley Baker To Return As Olmec’s Voice For The CW Reboot

The tea ceremony is about to begin when Nicky calls Ryan (Jon Prasida), asking Althea’s computer experts to locate the shrine and the wizard. Dennis’ sister Chloe (Chelsea Clark) teams up with Ryan to provide a welcome distraction that allows Althea to briefly escape the ceremony.

Immediately after Nicky, Zhilan, and Henry (Eddie Liu) discover the wizard’s location, Russell Tan’s forces ambush and the monastery, stealing the mythical weapons. Unsure of the end of a possible confrontation, Nicky calls her family and encourages them not to worry and ruin Althea’s special day.

Russell is the first to arrive at the secret shrine, killing the wizard, hoping the bian ge will return to arms. Instead, the energy possesses Nicky and Zhilan, who both end up in an alternate universe where bian ge Never existed. In this bizarre world, Nicky has never been to the monastery, and Zhilan reunites with Kerwin (Ludi Lin). The two see and follow a hooded wizard to the monastery, who reveals himself as Pei-Ling. After their encounters with the mind of the Kung Fu master, Zhilan commits to his choice to control bian ge, and Nicky thinks about her decision to destroy it.

They wake up in the real world and engage in a dramatic air battle. Nicky hits bian ge out of Zhilan, each measured hit after another, sending him “back to the world to which he belongs”.

As the season finale seems to bid farewell to the mythical stories of the Forge, bian ge and even Xifu, he introduces new threads and threats to explore for Season 2. The final scenes provide a glimpse into Russell Tan’s control over San Francisco and an unknown “offspring” who might have more in common with Nicky than she doesn’t think so.

Kim and Berens spoke with Deadline to reflect on Nicky’s growth throughout the season, the continued impact of bian ge, the enemies of season 2 and more. Read the conversation, which has been edited for length and clarity, below.

DEADLINE: What was the process to put together this busy first season finale and bring it back to the monastery?

ROBERT BERENS: I think it’s interesting to go back and look at what we had planned for the final. In the end, we ended up taking a different path to get to the place we wanted to get. The intention was always to have a bursting burst of a final. Finding a poignant way for Nicky to leave her family and return to where it all began has always been very important to us. Once that was clear, it almost became a two-player game with Zhilan and Nicky, like we really wanted to take on them in a rich way that opens up their two characters and sends them to a new place.

CHRISTINA M. KIM: It just seemed like I had come full circle as Nicky would return to the monastery. It was really fun figuring out how that would play out and how it all ended up in the finale.

She had obviously undergone a huge transformation. She had learned a lot about herself and her family history, and she returns with her love. So she comes back as a different person.

DEADLINE: How will we continue to see bian ge affect Nicky and her legacy in the future, now that he’s returned to Earth?

BERENS: The change that excites us, without revealing too much, is that the myth is now to move to San Francisco. Without getting into the spoilers of what this will look like or what it means, it sets us up for a season where everyone is sort of in the mix of mythology a bit more than they were in the first one. season. It’s not just Nicky’s trip. Everyone is kind of in the mix, and I think with the Tan family and opening up their story and these characters, including Mr. Tan, I think we have the opportunity to fit in there. family history and mythology going forward, which I think we’re all really excited about.

I think it’s going to be an exciting reboot with the same characters and the same concept. As for the mythology of warriors and guardians, we will see it play out with the character of Nicky’s cousin that she did not know – that we teased at the end of the finale. His aunt’s daughter, as Mr. Tan said, is the offspring of a warrior and guardian. What does it mean? That there is someone who has essentially merged these two mystical lineages. So I think we’re putting together a very interesting leaf for Nicky in season two.

KIM: We’ve been fortunate to have the most phenomenal cast, so we’re thrilled that this dynamic allows all of our cast members to interact even more. I think the stories and episodes really come to life when the family is together. We’re thrilled to have the family even more in the mix than they were in the first season.

DEADLINE: The finale makes Russell Tan a much more ubiquitous villain for Season 2. How will the institutional control he seems to have over San Francisco play out in future episodes?

BERENS: It’s exciting to tell a story about Nicky against more than one family, especially one that is kind of a foil for our main family, our protagonist family. This is something that really sang in the writer’s room and got us all excited at the end of last season. I think we tackle issues like institutional power, wealth, and corruption in the first season on an episodic basis. We started building San Francisco a bit in the first season, but now we have the chance to really dig into the San Francisco version of our show and dig into San Francisco history. I think having this antagonist who has roots in the city and wields power in an institutional way is exciting for us and opens up new types of stories.

DEADLINE: Kung Fu addressed a number of relevant social issues such as anti-Asian hatred, racism, police brutality and sexual harassment. How do you plan to transfer that social conscience to season 2?

BERENS: I think as long as social issues are built into the world of the show, we’re definitely going to keep that alive. This isn’t the last time you’ve seen Althea’s story, and I think the more we dig into San Francisco as a character on the show in season two, I think we’ll keep these topics and these. real life issues.

KIM: All of these stories came out organically as we broke the season’s arc for the characters. We never set out to make a story of assault in the workplace. It was really about the story of Althea, its arc and the writers opening up to different ideas and experiences from their work environments. We’re excited to walk into the room and see what kind of bubbles are popping up, and what’s going on in people’s minds, and maybe there will be some topical issues or not, but something tells me that there will be things like this that will come upstairs.

DEADLINE: What are some of the rewarding aspects of bringing Asian talent and the AAPI community back to the Kung Fu spotlight and adding your own twist to the original series?

KIM: I mean, creating this show, getting this show to air, and receiving it, as it was received, was just a gift because nothing makes me happier than to hear that people watch it with their families. Let people relate to it. Parents watch it with their children and it opens up conversations. It makes me so happy, and I think we’re very lucky that, unlike other shows, we have a full cast of Asian-American actors who have fully fleshed out storylines, who have character arcs that we are on. have worked.

I guess the creative freedom – it’s really fun for me and all of our writers, and I think Bob and I just need to show off. There is a freedom that comes with that so I feel very lucky. I’m so grateful, and it’s been a wonderful season, and we’re so excited to pick it up in season two.