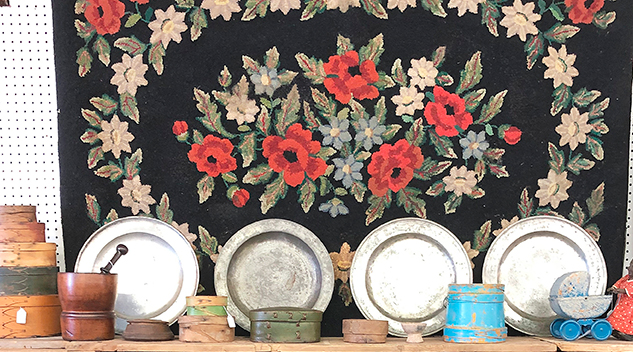 There were more than 250 people lined up for the opening of the show on Saturday morning.
—Klia Ververidis Crisafulli photo

Review and photos by Rick Russack

DEERFIELD, NH – Klia Ververidis Crisafulli brought her show from Brimfield North to Deerfield Fairgrounds over Memorial Day weekend, May 28-29. It was the second time the fair was held, it was even better than the first in 2021. The weather was perfect, there were over 350 spaces occupied by vendors and the event attracted over 8,000 attendees . The logistical problems encountered last year were easily eliminated by giving dealers two days to set up and using a second access road to the fairgrounds for the public. The first buyers were greeted both during Friday afternoon set-up and on Saturday morning before the big crowds entered. It was win-win for all. The fairgrounds are huge and dealers can set up in buildings or outdoors, with many taking advantage of the spaces under shady trees and the extra space allowed by the layout. The show was heavily promoted on social media, which may explain the diversity of participants. Most of the exhibitors we spoke with were from nearby towns in New Hampshire and had a few other exhibits.

As for the items available to shoppers, the response would be similar if they were asked to describe what might be found at a Brimfield show: “close to everything”. There were selected antiques, decorative objects and handicrafts. Vendors, many of whom had never done this show or any other show before, brought garden furniture and accessories, collectible bicycles, art pottery, mid-century furniture and accessories, toys vintage, vintage glassware and kitchenware, vintage clothing, rugs, folk art, works by self-taught artists, quilts and more. There were 15 food trucks. It’s a chicken or the egg question: does the eclectic selection of merchandise attract an eclectic crowd or is it the other way around? Whatever the answer, there were older buyers who easily mixed in with millennials and families with teenagers and young children – some of whom were already collectors.

WMUR, the Manchester ABC affiliate, filmed part of the event, calling it “New Hampshire’s largest antique fair and flea market”; a reasonable description. Crisafulli said: “We didn’t know they were coming. They probably saw our pre-show promotions and they just showed up at the door with their video camera.

“Make us an offer,” said the folks at Cobblestone Resale, Wakefield, NH, when asked for prices for the 50-odd pieces of art by self-taught artist Ron Fontaine. “All proceeds go to the local food pantry. It’s what Ron did while he was alive and it’s what he wanted us to do after he died of Covid about two months ago.

One booth, Cobblestone Resale, Wakefield, NH, had a very unusual group of metal and mixed media artwork by self-taught artist, Ron Fountain, and a very unusual way to sell it. Fountain, who recently died of Covid-19, lived in Wakefield, NH, and created and sold his work to benefit the local pantry and the Rochester (NH) Museum of Art. His works were made of found materials, most of which were recyclable and painted in bright colors. Fountain once described his work: “My creations from scrap metal and discarded materials stem from the early influence of growing up during the lean years of the Depression on a farm.” When asked how much the artworks sold for, Rose Baxter said: ‘We ask people to give us an offer – the most they can afford, and if that seems reasonable we sell it. All money, plus costs like booth rent, goes to the food bank. We also accept cash donations for the food bank.

After the salon was open for a few hours on Saturday morning, Baxter said it sold several pieces to people who had made offers and others were considering making “purchases”. Fountain’s work was exhibited at the Gaffney Museum, Sanbornton, NH, in 2011. She said they sold a few pieces – one for $50 – “because that’s what the person could afford.”

Business was done at the more traditional mansion by Beth and Patrick Heffernan, Walpole, NH It was the first show the couple had ever done. Most of their very colorful pewter ornaments and outdoor furniture were made in Mexico and were not old. You couldn’t miss the large painted pewter rooster, which was about 6 feet tall and cost $600. A smaller one was $150. When asked how the company got started, Beth replied, “We used to live in Texas, not far from Mexico, and we saw a lot of these creations. We recently moved to New Hampshire and decided to see if we could make a business of it by selling them. Everything is very colorful and well done and we get a good reaction.

A Manchester group store, Antiques on Elm – a short walk from the hotel which will host the New Hampshire Dealers Show in August – had a large stall filled with merchandise from their store. Included were stoneware, yellowish, fruit pots, dolls, vintage clothing and more. Don Peterson and his son Daniel were also trying out their first show. Dan has been collecting vintage bikes for about ten years and decided it was time to start selling some. He had a selection dating from around 1963 to 1990 and priced them between $75 and $125.

In a conversation with Chris and Lady G (she said her last name is unpronounceable so she uses Lady G) from Boston they said that in the last few years they had been to an event that we didn’t have never heard of: ‘The World’s Longest Yard Sale’, 690 miles long. They said it’s a four day event in August and runs along State Route 127 States from Michigan to Georgia and garage sales are held on both sides of the freeway and there are hundreds, if not thousands, of vendors moving in. He has his own website www. 127yardsale.com, named after the road it follows), and they said they met shoppers from as far away as California who came just for the event. farm equipment to antiques. You have to see it to believe it.” They’re probably right.

We mentioned that there are selected crafting vendors. One of them was George Merrill, Dry Dock Designs, Enfield, NH Merrill makes small decorative boats from found materials – wood, metals, etc. – and displays them as wall hangings. He’s been making them for about four or five years and started when he inherited a barn full of old wood and was thinking about what he could do with it. He is a member of the League of New Hampshire Craftsmen and exhibited at their large craft show at Lake Sunapee in August 2021. Deerfield was his first antique show. His boats cost between $75 and $350, and business has been good since he was featured on the TV show. New Hampshire Chronicle a few weeks ago. After the show, he said he sold about ten boats.

Sage Farm Antiques, a monthly three-day market in North Hampton, NH with up to 40 dealers, uses one of the fairground buildings for its participating dealers. The patio set with a metal table and four chairs was priced at $225 by Ann Rowe, Wilmot, NH The sundial in the foreground was $185.

Crisafulli thinks, like many, that attracting young collectors is something that needs to be done. She imagined a unique program to interest the youngest of the show: a treasure hunt. Staff at the admissions desks, seeing that a family had young people with them, encouraged the young people and their families to participate in an “interactive scavenger hunt”, with prizes awarded to those who completed the assignments. Exhibitors have been informed of the program and have agreed to participate. The youth were given an instruction sheet that required them to visit ten booths, ask ten questions and take pictures. The instructions were similar to these examples:

1. Take a picture of a clock. Ask the seller what type of clock it is and when it was made.

2. Take a picture of your favorite vintage toy. Ask the seller when it was made.

3. Take a picture of your favorite object!

Between 30 and 40 children and families completed the hunt and received the prize, which was cotton candy from one of the food vendors.

Over 8,000 buyers attended the two-day show. This photo was taken mid-morning on the first day of the show. —Klia Ververidis Crisafulli photo

After the show, Crisafulli noted that the logistical changes made the event more enjoyable. “We heard a lot of positive feedback, and there were even emails, about how smooth the setup was. The extra time also allowed us to spend time with our new, mostly younger exhibitors. Some had never done a show before and we were able to help them with some basic advice I think it’s really important that we as show managers do it and the scavenger hunt was really fun for all the world and loved by our vendors. The social media and print media promotion we did really reached the people we wanted to reach. Last year was an experiment for us to see how this kind of show would be received The answer answers this question We will definitely be back next year and maybe we can do a show in the fall.