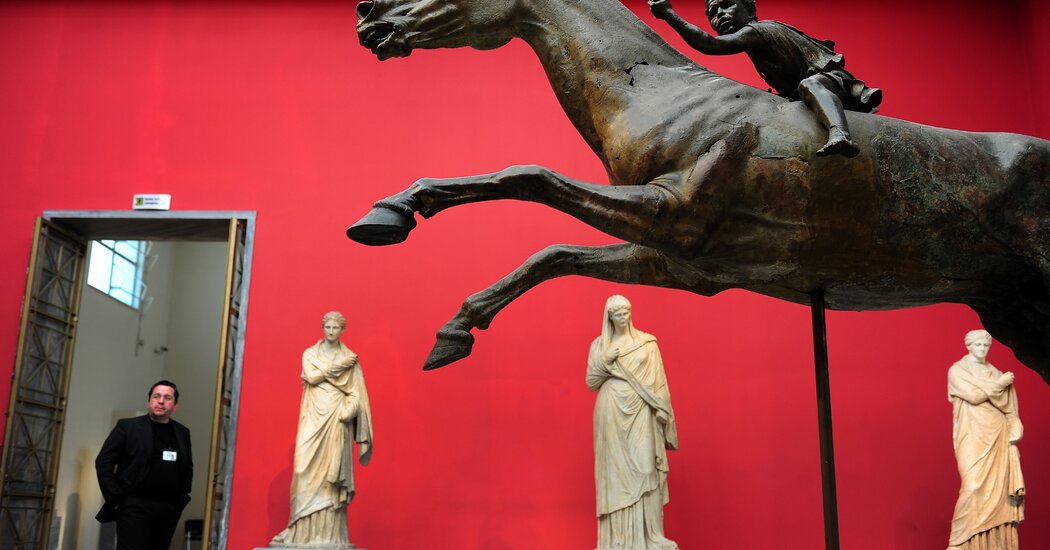 There are nine indices that begin with asterisks: 23-, 24-, 46-, 49-, 69-, 87-, 89-, 113- and 116-Across. As configured in the grid, eight of these clues are paired and occupy four rows of the grid, which might make you wonder what these pairs might have in common. The starred clues all seem fairly innocuous, and their corresponding entries are quite straightforward. (But here’s a curious fact: Seven of those nine entries are either debuts or very rare appearances in The Times puzzles.)

“Artificially watered”, for example, is simply IRRIGATED. “Loud disagreement” is ALTERCATION, and “Contract” is shrinkage; no puns to be found, and certainly no clear connection between any of these words, is there? Add COMMANDED, INTERFACING (not “interacting”, as I first thought) and UNINHIBITED; still no clues there.

You need to see the entries down to make the connection. It happened to me at 49-Across, SHRINKING; its center letter, “N”, is also the center letter in 36-Down, TENTH. You can change the “N” to “E” to get SHRIEKING and TEETH. Mark the “E” there.

Try 23-Across, UNLIKABLE, which has 4-Down, WOKEN, crossing at the “K” in the middle of the two entrances. What letter can go there? “V”, to make INVITABLE and WOVEN.

This letter change is simple, but you’ll be hard pressed to find many unforeseen examples in a puzzle of your own – it’s very carefully choreographed and certainly a feat of construction. Once you find a letter that you can switch to in the center passage of each of the asterisk entries and read those letters in order, the name of an upcoming holiday will be revealed.

Rarely have I considered such a necessary theme explanation, and I can’t help but think that some people have solved this puzzle, scratched their heads, and moved on without getting the hang of it. It’s utterly charming and a bit like that shy, smart person in your life who once had a crush on you, but whose hints to that effect were very subtle.

I built this puzzle at the end of 2020 with the intention of making it work on Valentine’s Day in 2021, as February 14th was a Sunday last year. Will Shortz liked my puzzle but informed me that Lisa Bunker beat me to it with her ingenious “Sealed With a Kiss” crossword. Will graciously agreed to keep my puzzle for a year, and I’m glad his time has now come.

Will asked me to try and reduce the word count from 144, but I’m grateful he finally made an exception. Working with 18 symmetrical, nested topic responses was one of my biggest building challenges to date, and I wanted to be sure to keep each response in the grid as natural as possible, even if it meant having a higher word count. high and less flashy bonus. As ambitious as I like to be with my themes, I never let myself forget the newer, more laid-back solvers: if one of my puzzles ends up looking more like a building stunt than a pleasant solver, I don’t. didn’t do my job properly.

Do you feel off center?

Subscribers can take a look at the answer key.

Trying to return to the puzzle page? Right here.

What did you think?

What will replace the family lounge?