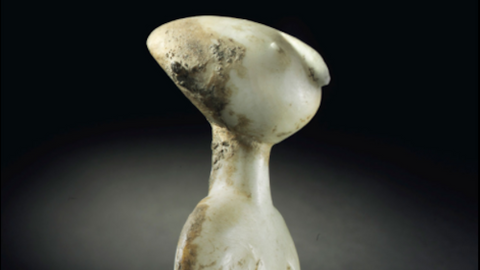 Contested statuette, the Guennol Stargazer, lost to Turkey, according to an American court

A New York judge ruled the country acted too late to claim a statuette auctioned by Christie’s in 2017, despite having been smuggled out of Anatolia decades earlier.

The “Guennol Stargazer”, a controversial Anatolian figurine, will not return to its homeland, a US judge said on September 7, 2021. The 6,000-year-old marble idol, Turkey says, has been illegally removed from the country and should be repatriated.

The Guennol Stargazer, so called because the figurine has a slight tilt of the head towards the sky, was “probably created between 4800 and 4100 BCE in what is now the province of Manisa in Turkey,” the New York Times Remarks.

“The Guennol Stargazer was part of the Guennol Collection, which was formed by prominent art collectors Alastair Bradley Martin and his wife, Edith,” Christie’s writing in an introduction to the icon.

” Guennol ‘is the Welsh word for’ Martin ‘, and the choice of Welsh is an allusion to where the couple spent their honeymoon. The Stargazer was acquired by the current owner, a private New York collector, of the Merrin Gallery in August 1993, ”explains Christie’s.

The private collector mentioned on the Christie’s site is Michael Steinhardt, billionaire hedge fund, who would put the object up for sale after 24 years. Steinhardt and his wife paid $ 1.5 million for the idol in 1993. “The idol grossed $ 14.5 million at Christie’s auction, but the unidentified phone buyer walked away. Christie’s still owns the idol ”, according to Reuters.

According to the Antiquities Coalition, while the anonymous bidder gave up buying the idol for fear that his identity would be revealed, “the Stargazer was nonetheless bought for $ 12.7 million.”

U.S. District Judge Alison Nathan in Manhattan said Turkey had “inexcusably slept” on its rights by suing too late – not until April 2017, just before Christie’s put the idol up for auction. She said the country should have known where the idol was decades earlier.

“Although the Idol was undoubtedly made in what is today’s Turkey today, the Court cannot conclude on the basis of the trial record that it was searched in Turkey after 1906. She wrote.

Had Turkey provided enough evidence to prove that the 22.9cm figure was excavated in Anatolia after 1906, that would have made Turkey the rightful owner under that year’s Ottoman decree, according to the judge.

“The decree of 1906 declared for the first time that all antiquities found in or on public or private land were the property of the state and could not be taken out of the country”, Sibel Ozel of the Faculty of Law of the University of Marmara writing in the International Review of Legal Information, Volume 38 Number 2 Summer 2010. “Since the decree did not apply retroactively, antiquities already in private hands in accordance with the pre-1906 decree remained private property. ”

Nathan also rejected Turkey’s claim that Steinhardt, who listed the item for sale at Christie’s, ignored “red flags” regarding the idol’s provenance.

Christie’s places the Guennol Stargazer in the Chalcolithic period, between 3000 and 2200 BC. Christie’s also refers to the history of its exhibitions, “having been on loan to the Metropolitan Museum of Art at various times from 1966 to 2007”.

Ironically, it is the fact that it is on display at the Metropolitan Museum that both distinguishes the idol and flies in the face of Turkey’s claims: “The Met is a major public institution. [and] made no secret that the idol was part of the Guennol Collection, ”Nathan wrote.

“Turkey has not contacted the Met for more information on the origins of the idol – a relatively low bar, all things considered, and which Turkey should reasonably have exceeded,” she added.

The Daily sabah reports that the Metropolitan Museum “had returned a set of artifacts known as the Lydian Hoard, to Turkey [in 1993], after admitting that they knew the items had been smuggled from Turkey when they purchased them.

The case was allowed to go to court after the defendants’ petition to dismiss Turkey’s claim was dismissed, and the country’s motion for summary judgment against the auction house’s counterclaims was granted. , according to the Coalition of Antiquities: “This historic decision [on September 30, 2019] has set a legal precedent that the prominent and public display of a work of art for long periods of time does not preclude recovery claims.

Yet while the trial was allowed to proceed, the evidence Turkey presented was not sufficient for the country to win the case against the accused Christie’s and Steinhardt, the judge, who ruled after ‘an eight-day trial without a jury in April, in September. (The case had been postponed for a year due to the pandemic, the New York Times Remarks.)

The Guennol Stargazer is part of “a family of marble statuettes which prevailed in Antiquity in Anatolia”, Daily sabah reports. Similar “astronomers” are already on display in Turkish museums, the first of which was “discovered in the settlement of Kiliya on the Gelibolu peninsula in western Turkey,” the newspaper writes.