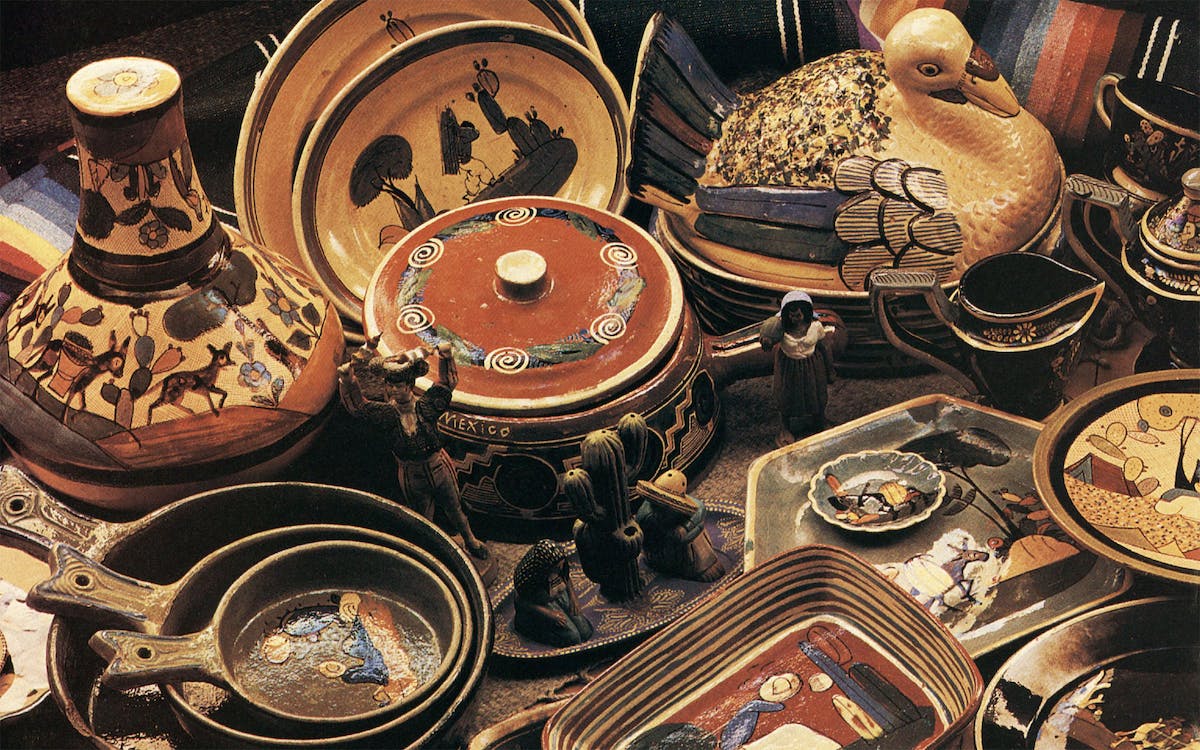 This story comes from Texas monthlyarchives. We’ve left it as it was originally published, with no updates, to keep the history clear.

Howard Letcher from Austin is a man with an obsession that might seem strange to some: he collects Mexican tourist items from the 1940s and 1950s. For years, purists have turned their noses to these brightly painted clay plates, cups and saucers; tea sets with picturesque scenes from Old Mexico; pans in the shape of turtles or chickens. Have you ever wondered what happened to figurines of peasants in sombreros sitting next to cacti? Howard has them. How about a set of hand painted plates with pictures of women washing clothes, men riding burros, children playing in front of an adobe hut? Howard has them too, and more.

“I call it Mexican export pottery,” says Howard. “Its design and function differs from native pottery made for everyday use, and the artwork is what makes it special. Most of the pottery he collects was made before 1960, during the decades when travel to Mexico became easy and cheap and American tourists bought lots of cooking utensils and souvenirs to take home. In almost every Mexican tourist center, visitors could find the distinctive pottery produced in Tlaquepaque, a town in the state of Jalisco that was a virtual factory for the manufacture of ceramic products. Wholesalers heavily influenced the appearance of pottery by ordering designs that their overseas customers would like – detailed, sentimental vignettes of native life. The stylized Aztec-Maya motifs that the Mexicans themselves preferred were to become popular in the United States only later. Meanwhile, American travelers were unknowingly helping to create a whole new genre of Mexican ceramics.

“In Austin and San Antonio,” says Howard, “it was fashionable to give a set of Mexican pottery to a couple when they got married. A friend of mine says trucks from Mexico were going up and down the streets of Austin selling clay. Plus, the curio shops in San Antonio were full of them.

“The Tlaquepaque type of pottery is very distinctive,” says folk art collector Clifford Wallace of San Antonio. “You can identify it by the background colors: a rich beige, blue, black and the deep terracotta of the clay itself.” Personally, he can’t stand the stuff (“Dreadful,” he says), but he acknowledges that it’s becoming more collectible by the day.

Caroline Lee, owner of Exvoto, a popular art gallery in San Antonio, takes a different view. “Tastes change,” she says, “and what was once considered junk food will later be recognized as valuable. The eye of the collector identifies what is good in a room, whatever the tastes of the moment. Mexican export items, she observes, “are all handmade and the glazes are wonderful. It represents the marriage of folk art tradition with popular fashion.

When Howard first started buying Mexican pottery at flea markets and garage sales two years ago, there was only passing interest. The event that catapulted him into the fanatical ranks was a city-wide garage sale at the Austin City Coliseum. “My first big payload came when I was broke,” he says. “A lady from McAllen who had a booth brought out a whole set of Mexican pottery, the best I’ve ever come across. The pottery had been in her family for years, and she started crying when she put it on the card table. The coins ranged from twenty-five cents to several dollars each, and I had to brush aside a few newlyweds to reach them. I think I wrote a hot check for ten dollars and paid it off within days. Within fifteen minutes, every piece of pottery was gone.

Despite the extent of his collection, which today approaches 1,500 pieces, Howard is the first to admit that he is not an expert. Everything he learned came from his continual pursuit of bigger and better work. “I don’t speak Spanish, he says, and I’ve never been to Mexico, not even to Nuevo Laredo.

At first he went straight for kitsch, but with experience he developed a sense for what he loved and an appreciation for the utilitarian qualities of pottery. “Pretty early on, I bought a set of Mexican pans. I had eaten a lot of enchiladas, and the pans worked great for cooking them. I could put one in the oven at five hundred degrees, and it wouldn’t crack. When I washed it, I could smell the earthy smell of clay, but he is careful about the dishes he uses for cooking, as many pieces from this period have lead in the glaze. lead tend to mar the finish, so to completely avoid problems, don’t put anything acidic or liquid in a jar unless it’s marked ‘lead free’.

In retrospect, Howard’s lack of preconceptions about Mexican pottery turned out to be a godsend. No one had told him that a heavily enameled tea set with 18th century English lines was not considered good folk art, so he bought it. Regardless of what was ethnically pure, he helped save a small corner of Mexican popular culture.

His collection consists almost exclusively of pieces found in Austin, including several from San Antonio. He prefers accurately painted, realistic figures and refuses to buy anything lacquered, varnished, or decorated with homemade paint or other cheap materials. Lately, he has learned to spot works by the same artist: “I will notice the same style of donkey or the same cactus, even among pieces that I have bought at different times and places. Thanks to his obsession, pieces of several sets that had been separated for years were brought together.

Within two years, Howard’s pottery mania took deep root. “My collection may not be worth a lot of money, but it’s priceless to me,” he says. “At some point I want to go to Mexico and do some research, even try to find the artists, if there are any still alive.” In the meantime, he tries to temper his enthusiasm for practical reasons. “I refused some pieces that I should have bought this weekend, but it becomes a question of space. One day I had four pots, and the next day I had over a thousand. I don’t really know how it happened.