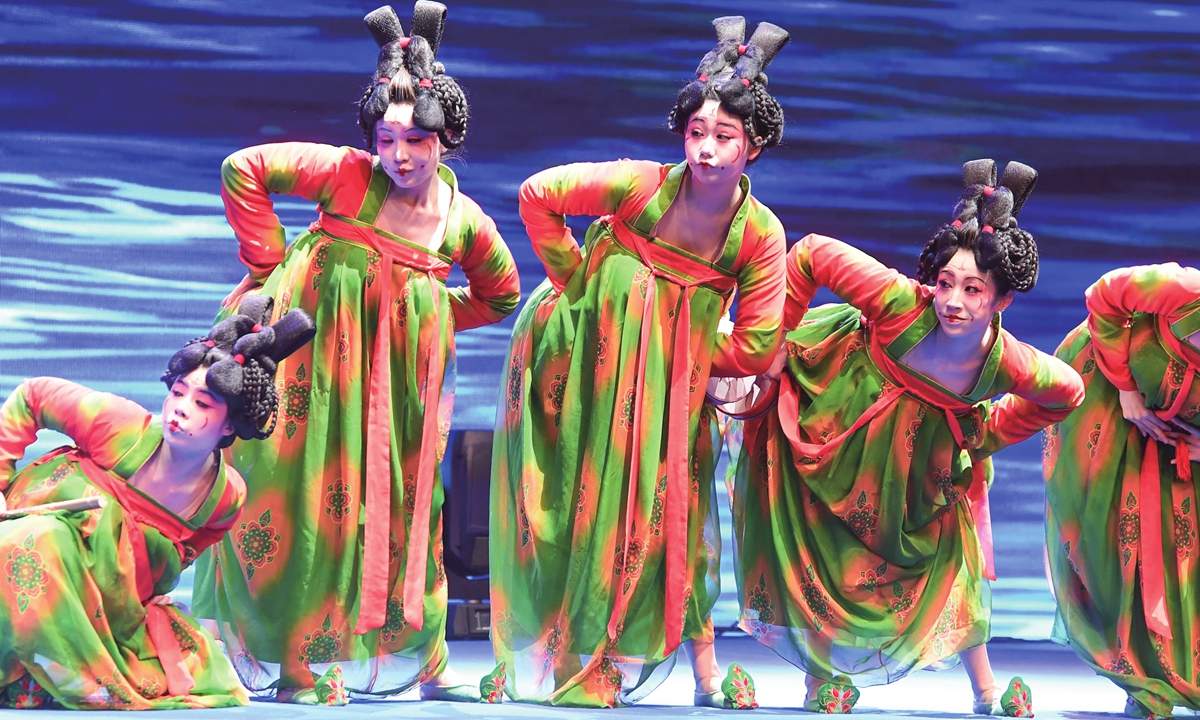 Carriers of a nation’s genes and spirit, cultural relics and heritages are irreplaceable resources for a flourishing civilization. A large number of Chinese relics have become more popular in the past 10 years and have made people around the world know more about Chinese culture. The Global Times will feature a number of “star” artifacts in this series, bringing to life cultural relics stored in museums, heirlooms on display across the vast land, and texts written in ancient books.

As Chinese President Xi Jinping said, Chinese civilization, together with the colorful civilizations of other countries, should provide humanity with proper spiritual direction and strong spiritual impetus.

From unadorned pottery figurines to the famous three-color glaze pottery of the Tang Dynasty (618-907), ancient ceramics have provided a vivid insight into the daily life of ancient people.

Although most ancient ceramics are displayed in museums, many young artists in China feel that they deserve to be seen by a wider audience than the limited number of people who visit museums.

In recent years, many artists, dancers, and television directors have used creative means to bring these pottery figurines to life, expanding their audiences and sparking a wave of discussion about Tang figurines and the pursuit of traditional Chinese aesthetics. .

“In the digital age, such creative productions not only give audiences a way to see ancient Chinese culture, but also stimulate their imaginations and thus help promote the legacy of traditional culture. If we [creative workers] don’t give these ‘flat’ objects extra stories and personality, the audience will be unable to imagine how these ancient relics relate to their lives,” said Zhang Xinghao, a cultural creation researcher and production designer, on Wednesday.

“When you see these things in the museum, the ‘wow’ factor is only temporary. But, when you see them moving and having fun, you want to create your own stories with them.”

The power of dance

As chiming bells and ancient flutes are played together, a group of painted terracotta figures gradually “emerge” from a museum and transform into Tang Dynasty court ladies with fresh, lively expressions on their faces. faces.

This scene is the start of the hit Chinese dance performance Night Banquet at Tang Dynasty Palacewhich was performed at the 2021 Henan TV Spring Festival Gala.

Once buried in ancient tombs and now part of the collection of the Henan Museum, these figurines have come to life for the first time in more than 1,000 years thanks to the spectacle.

Stunning colors, lively dance moves and captivating storytelling techniques broke away from the stereotypical calm and lyrical atmosphere of traditional Chinese dance to deliver a fun and lively performance.

Modern digital technologies such as 3D and augmented reality were used to bring the real and virtual worlds together on stage.

“This dance is a combination of the rich treasures of traditional Chinese culture and modern technology, fashion and aesthetics,” Chen Lei, director of the gala, told the Global Times.

“The huge success of this work has made us realize that these traditional dances that were once hidden in theaters and halls don’t have to hide there forever. As long as you do it right, audiences will want to see them too. television.”, Jiang Xiaowei, director of the variety show Dancing through the millenniumtold the Global Times.

Ceramic figurines made from the Sui dynasty (581-618) to the Tang dynasty tend to depict scenes and figures from daily life. This is especially true of Tang figures, considered the model of human beauty and the pinnacle of Chinese sculpture.

To further merge the ancient life depicted in these artworks with modern life, Chinese cultural workers have experimented with many different creative methods to pique people’s interest today.

“My name is Guo Wenzhi and I am an official clerk who worked in Gaochang County during the Tang Dynasty,” says a colorful figurine unearthed from an ancient tomb in Turpan, Xinjiang as part of China’s documentary program. Every treasure tells a story. Telling his story, Guo transports viewers hundreds of years in the past to arrive in the ancient county.

Right after the show first aired, sales of cultural products surged on e-commerce platforms as people rushed to buy these products inspired by the cultural relics mentioned in the show.

Other ceramic figurines play different roles in the program as they depict life as it was over 1,000 years ago. By following in the footsteps of the figurines, viewers can enjoy the life of people from an ancient age.

“It’s not just museums; creative derivation has gradually become a new strategy for many cultural institutions in China to promote cultural relics. People usually think of mugs and scarves when it comes to souvenirs. for sale in museums, but there is so much more than that. There needs to be a system that connects online and offline promotions with various participants like the museum, designers, marketing companies and more,” said museum researcher Peng Xingxing told the Global Times.

“In the future, all of this will take place in a virtual reality world. I know many young insiders who are already designing and selling purely digital works inspired by Chinese history,” Peng said.