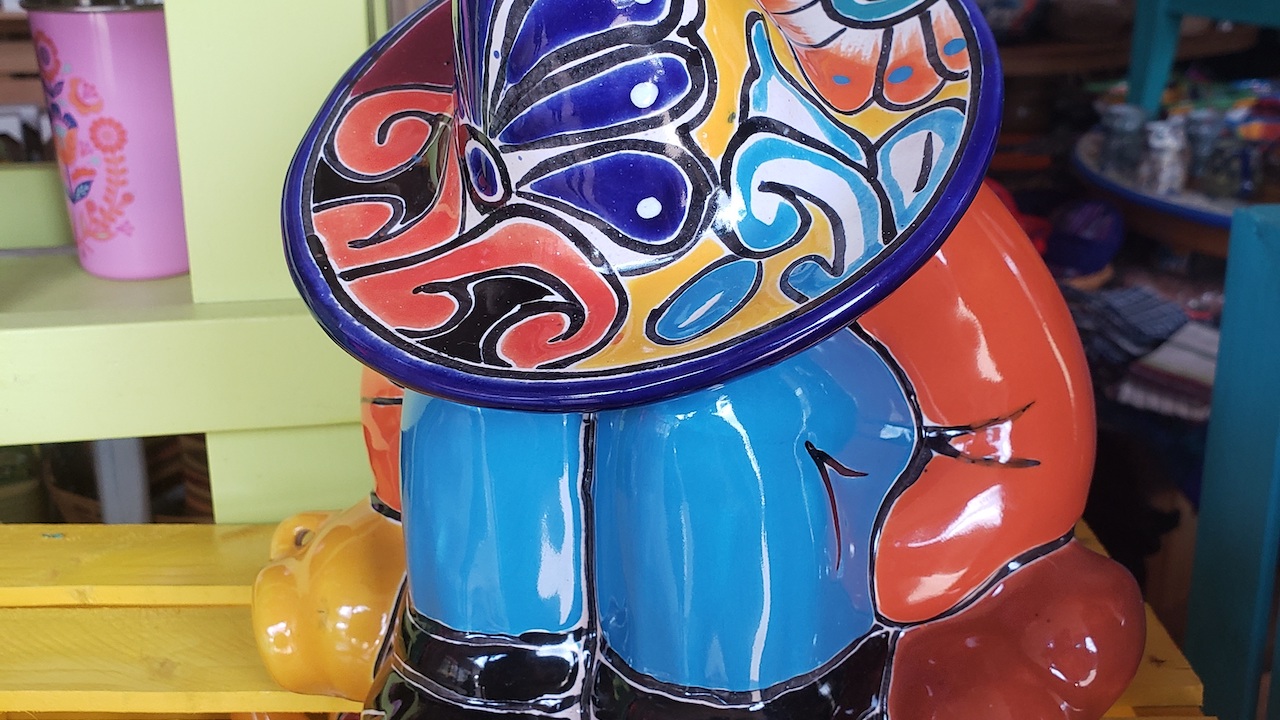 You’ve probably seen the famous cartoon of a Mexican taking a nap under his sombrero, usually near a cactus. You might not know the cartoon has a name. He is known as Pepe Siesta (“Pepe Nap”). Recently while window shopping in central Oregon, I came across a Mexican themed art store and saw a talavera statuette of Pepe Siesta. Of all the places, I didn’t expect to see Pepe in central Oregon, nearly a thousand miles from the nearest Mexican border town, Tijuana, where the famous figure is sold everywhere.

Seeing Pepe activated something deep within me, and I decided to take a quick photo of him because I wanted to remember my exact emotions while looking at the ornament. Every time I see a replica of Pepe Siesta, I wonder what’s going on under his sombrero. Is he dreaming? Does he have any idea what’s going on around him while he’s napping? It struck me, at this precise moment in central Oregon, that I had to write a letter to Pepe Siesta, just as I would to Oregon Humanities’ Dear foreign project. My goal is not to get answers but to dive into myself and examine what some would call an iconic image and others a racialized trope. Here is my letter:

You don’t know me, but I see you all over the place, and in the strangest places. I saw you in central Oregon; East of Los Angeles; Chicago; Victoria, British Columbia; and, of course, Tijuana and MichoacÃ¡n. All over. I have seen so many cartoons and representations of you that I feel the need to get to know you better, or at least to ask you a few questions. You may or may not want to respond, which is absolutely correct. It is your prerogative to satisfy my curiosity while you take that nap you are so famous for. Perhaps, unbeknownst to you, someone thought it wise to capture you in a moment of utter vulnerability, in a deep sleep. Or maybe you got caught in a moment of deep thought. My hope is that at least someone has asked for your permission once you have returned, and allowed your image to be shared, recreated and broadcast around the world. Far too often I have seen people use your image and slander or judge you in ways that I find quite disturbing.

Just to let you know, there are way too many people for my taste who tend to think of you – and, by association, Mexicans – as people who don’t want to work. All because this image was captured at some point in your life. This is unfair, but sometimes extreme biases are imposed on you and, by proxy, the Mexican people, because of a likeness based on a moment of your vulnerability. Completely unfair, I know.

Every time I see this caricature of you, a Mexican, with your sombrero over your eyes, hunched over in the shadows, it makes me wonder: why does this bother me so much? Did someone take advantage of you? Or is it the conclusions people jump to that touch me? I’ve come to realize that I just don’t like stereotypes about my people, or stereotypes about anyone.

I wonder if anyone has ever asked you why you were so tired and in this position in the first place. (Like you owe someone an explanation.) I like to think you were practicing self-care– something the gringos have perfected to explain a well-deserved break or rest. Taking a moment to look after your own well-being is now called taking care of yourself. Did you know ? Can you believe it? It’s pretty trendy these days. It is an evolution and, dare I say it, a revolution. We Mexicans have known naps and self-care for hundreds of years, yet we’ve been judged for it. And now, all of a sudden, the gringo culture has discovered what we, the people of the world, have understood for a lifetime. Imagine that. Better late than never, I guess, right?

I’m afraid some people have chosen to take liberties and use ugly interpretations about what you were doing in your lonely time. You may not know it, but massive judgment has been passed on our people because of your image. It is by no means your fault. Some have said that we are lazy; that we are inefficient and that we see time as a hobby, rather than seeing time as a commodity, as something to be monetized. The phrase â€œtime is money and money is timeâ€ comes to mind. These impositions and calumnies too often come from a small, strong and select number who are not historically where our ancestors originally called their home. These potential critics have very little cultural understanding of the value we place on the relationship over time. Those who would judge negatively have come to occupy our ancestral homeland while feeling free to criticize us and the work ethic of our people, while comparing it to theirs. It’s really quite remarkable if you think about it, Pepe.

All worked to the bone, with very little recognition other than a foreman who sought praise from his boss for his workers, including my dad. Instead of praise, my father heard the boss of the boss say, â€œGood! Work them! They have families to support. No appreciation for his exhaustion, sweat or broken body. Nel, nada. All my daddy got was a crippled body and oppressive, critical and abusive hostility which in turn was directed not only against him, but against our people. Those who feed this great nation that was once ours. Indispensable but undesirable other than for the work we produce.

Every time I see your line with your sombrero on your eyes, snuggled in the shade, resting, whether it’s under a cactus or in the shade of a half-built wall on a construction site you’ve been on, I know, and people need to know that you are taking care of yourself. You rest after carrying the weight of a nation that would soon collapse without you, for us, the people who do the work that no one else wants to do.

So I’m telling you this, Pepe: get a good rest and take your nap. You’ve gained every second your body needs to heal and recover.

The son of Mexican immigrants, Javier Cervantes was the first in his family to graduate from high school, community college and university. Her life and achievements are the embodiment of the dreams her parents had when they came to the United States. Born and raised in Oregon, he has had a unique transnational experience having lived in a two-country modality between Mexico and the United States for most of his life. Being from rural Oregon allows Javier to speak of the rural experience, and having lived in Los Angeles and Chicago, Javier can also relate to a distinctly urban existence. Currently, Javier is Director of Equity, Diversity and Inclusion for Greater Albany Public Schools and is the owner of OtroSol Diversity Concepts, LLC. He is a member of the board of directors of Oregon Humanities.