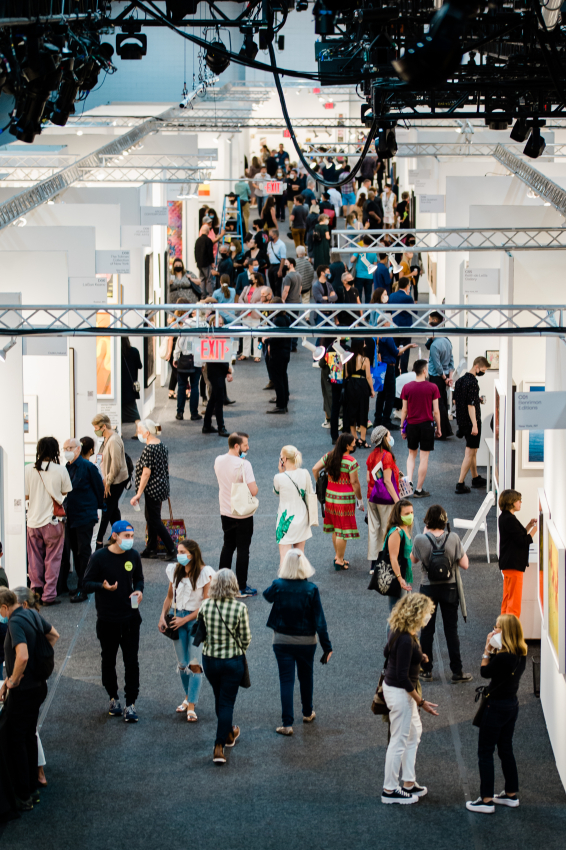 The people, the champagne, the sad fashion, the loud designer logos – pretty cheap for such an expensive deal on VIP days. This weekend marks the extravaganza of the late summer art fair in New York, with the Armory show at the Javits Center and art on paper at Pier 36, and it’s more meh than wow.

Fortunately, Art on Paper is more sober in its concept and its ambition than the Armory. Human-sized, the fair invites a relaxed stroll against the gigantic format of the Armory and an intimidating scope that seeks to wrestle with an elusive “now.” By raking such a wide net, who is even the public of these “catch-all” shows?

I can’t believe we still have any whimsical art derived from the banana, and yet the fruit is semiotically alive in the Armory. Yawn. At least Monica Bonvinci is aptly named small pendant (2021) exposes a penis. In living rooms that are so obviously designed to see and be seen, the sheer abuse of mirror-based art for social media-crazed narcissists shouldn’t come as a complete surprise – it’s part hype and pointlessness. communion at these consumerist feasts.

I admit, I took a few selfies in French Gallery Templonby Ivan Navarro Polka (2022), a multidimensional neon mirror, a chamber in which the gaze becomes the appropriate projection of an infinite scroll of misfortune. Other mirrors paired with neon slogans shout empty, dystopian messages such as like Jeppe Heinit is everything can change (2021, 303 Gallery) Where Brigitte Kowanz“United in diversity” (2018, Krinzinger Gallery) when in fact we are still in the same loop of disunity, despair and growing inequality.

Self-taught artist from Philadelphia Timothy Curtis applies playful drawings to illustrate the woes of (poor) mental health in Feelings #5 (2022), developed from an earlier feeling of blur in his “inkblot” series (2021) of Rorschacheque dimensions. In such disorientation, we find solace in Grayson Perry’s absurdly cynical large-scale map (The American dream2020, at Paragon) and the decolonial atlases of the Malagasy artist Malala Andrialavidrazana at Afronova who deconstruct the fetishized “antipodes”. With the mystical mandalas of Karla Knight at Andrew Endlin gallery, we approach the mysteries of a language-world and a welcome elevation, as in Small wheel I (2022). There is a way in and out.

Moments of suspended grace imbue the close-up artwork with elements, such as the sparkles of the sea (Melissa McGill, These waters2022 to Mazzoleni), leaves (Alejandra Fenochio“Esteros Del Iberá” series, 2000-2004, at Nora Fisch), and thunder (Kapwani Kiwanga, Ground, 2012, Poggi Gallery). In the midst of noise, they push us to stop, observe, feel.

Still at the Armory Show, Donald Ellis Gallery and native-owned, Buffalo-based Art Gallery K showcase Native American and First Nations pride in carefully selected collages, giclee prints, and LED artwork. For example, the Lakota artist Dana Claxton documents tradition and modernity in male portraits set against viridian green cinematic backdrops that embody an aesthetic scenography of remembrance and celebration. Edgar Pile of BirdsThe graphic names of Aboriginal nations inscribe an indelible notion of survival and challenge to Sovereign of Indigenous Nations (2019); we stand before them with as much sadness as rage for justice and real reparations. Conversely, Henry PayeurMixed media and collages depicting scenes of encroaching capitalism communicate a sense of precariousness and insecurity in Indigenous communities.

cuban artist Reynier Leyva Novo‘s small and large format What is it, what it was (2020) discusses public monuments and their multi-layered historicity. The work shows the amorphous face of politician and independent hero José Martí by sculptor Juan José Sicre – diluted in 365 exaggerated strokes of symbolic and changing time.

The haunting ceramic figurines of the natives of Tijuana Hugo Crosthwaiteit is Caravan (2022) at Pierogi refocus the migratory journeys and the flesh of asylum seekers in physicality and empathy, while the disembodied trunk of the roped silhouette of Nourry Pruneit is Atys 3 (2022) converse with the spiritually imbued floating resin limbs of Maimouna Warsi (The expulsion from the sky2022) and the painful health journey of Zohra Opoku inspired by ancient Egyptian mythology (I have my mouth to speak, my legs to move forward, my arms to bring down my enemies. The two entrances to the earth have been opened to me. Geb, the prince of the gods, opened my mouth (and) my eyes which were closed; it lengthens my legs which were crooked. Anubis strengthens my thighs. I am well raised (and) Sakhmet the goddess who exists in the sky lays me down…2022) to the ever-promising Marianne Ibrahim Gallery.

Personal stories are woven into rich textiles in Palestinian American Jordan Nassarhand embroidered cotton on cotton On the way to the desert (2022) in which he embraces the interconnection of place and time in relation to identity and heritage. Meanwhile at the Guatemala-based gallery Ultraviolet Projectschilean artist Johanna UnzuetaHilma af Klimt’s mesmerizing abstract and geometric weaving patterns, presented in precious recessed displays, recall the best esoteric works of Hilma af Klimt.

In the same vein, Art on Paper inspires when galleries show artists transcending their medium to redefine the porous and alluring and ambiguous boundaries of paper. As Gabriel de la Morathe sumptuous and hybrid painting-sculpture of 8,684 (2022) at the Armory, the multidimensionality of Yong Rae Kwonstainless steel on canvas Ficus Benjamina – Light (2020) diffuses the intensity of the prismatic flames. The optical illusions of Soeontae Hwangthe sensitively engraved sunny rooms, its domestic atmosphere of bright sunshine, and Kenta Takahashiis metallic”save the city» series (2022) at Seizan Gallery demonstrate the potential of paper – as a texture and an idea – to radically alter our reality.

Amid those pointillist highs, very few kiosks stood out on their own, but here are some (subjective, that goes without saying) highlights.

At the Armory, don’t miss +2 gallery and the combined works of Andisheh Avini and Iman Raad which explore and subvert traditional elements of Iranian culture such as poetry, natural heritage sites and other national symbols.

Still at the Armory, based in Berlin PSM Gallery presents personal memories as a cultural awakening in the juxtaposed works of Nadira Hussein and Marks. They both inhabit political spaces, Nadira Husain reclaiming a visual and textured practice rooted in repetition, symmetry and natural pigments, while the Elvish Markeus addresses fluidity and the versatile notion of home and uprooting in soft textures that denounce the lies of “blood and soil ideology.

At Art on Paper, Julia Seabrook Gallery understood the mission, crushed it and tore it apart. The conceptual booth is a labyrinth dedicated to the joy of black girls. Entering through a door that says “Enter here if you think art should be beautiful”, we enter a reconstructed house and shrine. We follow the signs to a confessional, a room where we can read india summers‘ Collection of #BARS poetry quietly on a director’s chair, before plunging into the chaotic flow of superimposed text messages in Amelie Fordit is A local man discovers love (2022). A boy thinks it’s a good idea to confuse love with what it isn’t – what could go wrong?

In the otherwise rigid codes of art fairs, Julia Seabrook brings a truly refreshing take on what it means to create and be art. All is not lost, even in its most constraining incarnations. Phew.