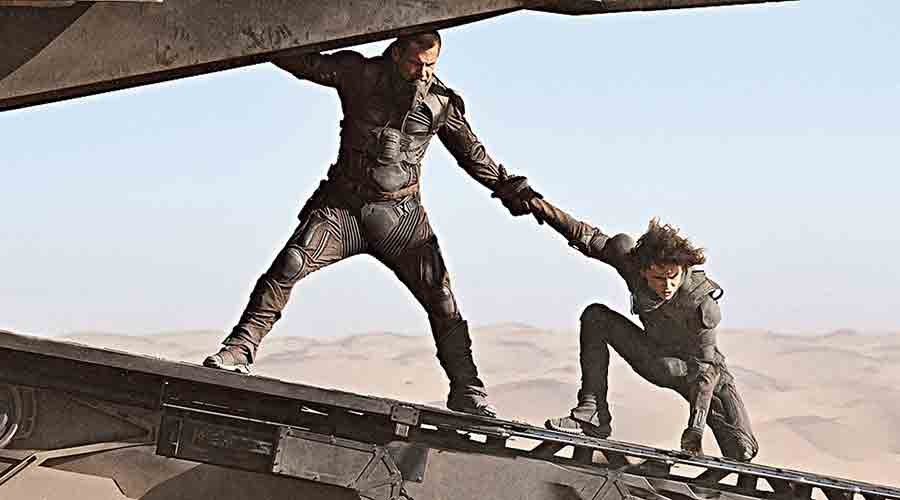 “Even though it’s science fiction, you believe in these worlds”

The visual spectacle we call Dune – which now plays in theaters – is brought to life by Paul Lambert. A prolific name in the visual effects world, Lambert is a two-time Oscar winner, having won the Precious Golden Statuette in consecutive years – for Blade Runner 2049 in 2017 and for First man the next year.

With Dune, based on Frank Herbert’s foundational sci-fi book, drawing as much on his stunning visuals to engage the viewer as on his gripping story, Lambert is, without a doubt, the best man for the job. On a video call from the US, Lambert chatted with t2 about the method and madness of creating the world of the big-budget Denis Villeneuve movie experience.

What was the feedback on your work in Dune?

It was very well received, as was the film in its entirety. I am very happy for Denis (Villeneuve, director), with whom I worked for the last time Blade Runner 2049. There are some viewers who didn’t like the movie too much, but that is more because their idea of â€‹â€‹the book and how it should be treated is slightly different. But in general, it went really well.

I know Denis was very passionate about the book and always wanted to bring it to life on screen. Do you share the same passion?

He’s on another level! I saw the movie (David Lynch’s Dune, manufactured in 1984) first. Growing up I was a huge Star Wars fan … Star Wars and The Sound of Music are what I always watched. When Dune came out, I was very intrigued because it touched on the Star Wars universe. It was then that I read the book and was mesmerized by the world. I was, at that time, into horror stories and more into reading James Herbert. So I read Dune because I was fascinated … and then I fell back into horror! (Laughs)

When we were working on Blade Runner (2049), Denis told me about his passion for Dune. And it wasn’t until after this movie was released that he started talking to me directly about Dune. He asked me if I would be interested. And I said, ‘Of course! Who would not be ?!’

Denis is a visionary, and working on this particular film was very collaborative. It involved Greig Fraser, the DoP (director of photography) and Patrice Vermette who is the production designer, and we all worked together to realize Denis’ vision. Having said that, Denis has a vision, but he is also very open to ideas and suggestions and is very collaborative. Many elements and concepts of the film were already made by Patrice seven months before I joined the film. He built the sets and I built the virtual world according to Denis’ vision.

Apparently Denis told all of you not to reference the internet or previous films in the genre for inspiration, but to look more towards nature and the interior … is that correct?

Yes. The story of Dune came before Star Wars and Star Wars is very, very heavily influenced by Dune. With Dune, I think Denis managed to produce a very grounded visual palette. Even though it’s science fiction, you believe in these worlds. Denis and I share similar sensibilities … we love our work to be extremely real. There are no crazy virtual cameras in this movie. Everything had to be based on the physical.

What were the most difficult parts of making this movie in terms of visual effects?

When I walked in, Patrice and Denis had already designed the sandworm (a fictional alien creature that appears in the Dune universe) and it also had to be animated. One of the most difficult technical aspects of this film was to create and move this amount of sand on the computer. Denis wanted the sand to be sometimes explosive, sometimes simply upward. I knew this would be pretty much a trial and error process. For reference, I asked the guys in production, at one point, if we could set off explosives in the desert, but then I was reminded that since we were in the Middle East, that probably wouldn’t be the best place to start explosives! (Laughs) Thank goodness we didn’t do that. Even before joining us, my team at DNEG started working on sand effects. I knew it would be tricky.

What works for the equation that you and Denis share on set?

It is the desire to make things as believable as possible. Denis is not a big fan of green screens and all that. And we tried to avoid that as much as possible, and whatever we could capture on camera, we did. We did a lot of work on set, rather than counting someone in a blue box and finding out later. And because we had a really good idea of â€‹â€‹how the film should ultimately look like, it allowed us to bring in techniques that gave us the best possible basis for the visual effects.

We wanted to avoid reproducing daylight inside a studio. We found the highest hill in Budapest and covered it with a sand-colored bounce. So when the sun came up it reflected and what I really had to do was mix the plates we shot in the UAE with the hours of footage of the dunes shot from a helicopter. All made for a very simple but beautiful mixture. Denis was always very encouraging when we were trying to come up with different ideas. It was one of the most collaborative environments I’ve been on. We were all always on the same page to get it right during filming, rather than relying on correction in post-production. It was never the attitude.

You’ve been in the business for a long time, but has relying on the green screens and post-production correction of this film at a minimum help you learn new things about your craft?

Yes. I learned a lot even during these six months of conversations that I had with the other heads of departments. Just trying to come up with new ideas for this film was very liberating. We were allowed to come up with the craziest ideas! (Laughs) Just this idea of â€‹â€‹the Ornithopter (a ship with bird’s wings that flies in the Dune universe) sparked a lot of discussion about how much it would cost, but we worked around that. And although we worked less with green screens, we came up with the idea of â€‹â€‹sand screens.