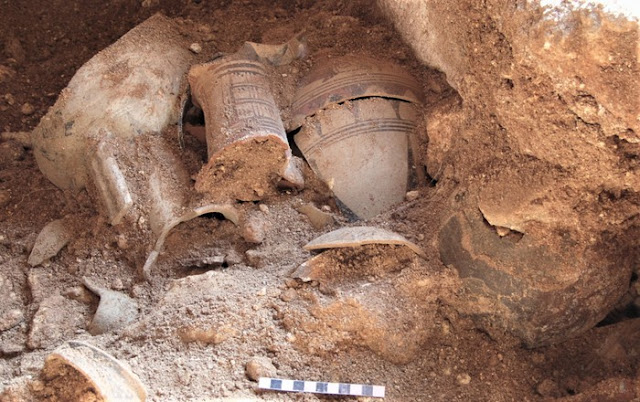 Italian archaeologists have just announced the discovery of ten spectacular Etruscan tombs found in the fall of 2021 in the Monterozzi necropolis.
Made as part of what archaeologists have called an “emergency campaign” to save the complex, the finds date from between the Villanovan and Archaic periods (8th-5th centuries BC).

Earlier this week, after the completion of initial restoration work on the artefacts therein, some of the spectacular discoveries made in one of the tombs were finally revealed.

The Soprintendenza dell Belle Arti Paesaggio Etruria Meridionale, the government authority in charge of all archaeological excavations, said the excavations were necessary to consolidate a series of cavities that had opened up as a result of excessive plowing on private land. As the area was adjacent to an already known archaeological site, steps were taken as soon as possible to consolidate the area.

Unfortunately, noted the Soprintendenza, as often happens in the case of burials so shallow and accessible from the road, all the surrounding space had already been violated in the past. Funerary objects were taken from some of the graves, sometimes, according to authorities, “with devastating effects”. after the vaults and walls collapsed.

Nevertheless, the archaeologists, who worked within the company EOS ARC, were lucky: in one of the burial complexes, the one closest to the road itself had indeed been looted in antiquity. But fortunately for archaeologists, these grave robbers were only interested in gems and jewelry – not, in this case, ceramics and other grave goods, which are of equal, if not greater, archaeological interest.

The vital context of the graves was therefore able to be determined and examined by archaeologists, using vases and other objects belonging to the graves.

Daniele Federico Maras, official of the Tarquinia Territory Superintendency, explains: “The tomb dates back to the first half of the 7th century BC. It is of the “twin” type, that is to say composed of two independent bedrooms side by side, almost identical to each other and open to the south-west on as many open vestibules, which are accessed by a steep staircase.

“The roof of the two chambers is of the split type, with a pointed vault carved into the rock, closed at the top by a series of nephrite slabs, while along the left wall is a bed, carved in stone which , in the case of the northernmost chamber, is adorned with carved feet”.

The doors to the tombs had been sealed with slabs of nephrite, which had unfortunately been smashed by the grave robbers so they could gain access to the graves – however, in a very unusual twist, they had been carefully resealed after being looted, Maras said.

Perhaps it was part of a belated show of respect for the dead – or hope that there would be no divine punishment for desecration.

Unfortunately, however, the looters failed to break through the slab protecting the north chamber, prompting the looters to also remove two blocks from the roof of the tomb, causing it to collapse over time, according to the Soprintendenza.

Working under the remains of the Gemina tomb, sifting through loose earth, archaeologists collected treasures such as fragments of impasto-glazed vessels, sometimes with incised decorations or configurations, and a clay statuette of a weeping woman.

In addition, they also came across several engraved and painted bucchero vases of Etruscan geometry, including jugs decorated by the man known as the Palm Painter, as well as ancient Euboic cups.

Some artifacts stolen from graves by grave robbers

Unfortunately, they also found the fragments of a thin sheet of gold, which archaeologists believe was all that was left of a thicker layer of precious metal, which the ancient grave robbers had indeed stolen.

“All the material was found broken,” says Maras, “probably intentionally broken by the looters in order to search for imaginary treasures hidden in the vases. be restored and will all be presented to the public as soon as possible.

Gemima’s tomb will be left exposed when the excavations are complete, according to the Soprintendenza, which added that a roof will be added to the site so that the whole burial complex can be seen in context by visitors in the future. .
In the meantime, he says, the long and difficult work of preserving the finds continues, at the end of which they will be handed over to the authorities so that the people of Tarquinia and the rest of the world can enjoy their beauty.

Superintendent Margherita Eichberg noted in the announcement that “emergency response was necessary to repair the damage, but now, thanks to the commitment of archaeologists from the superintendence, the emergency has turned into an opportunity to knowledge and cultural promotion”.