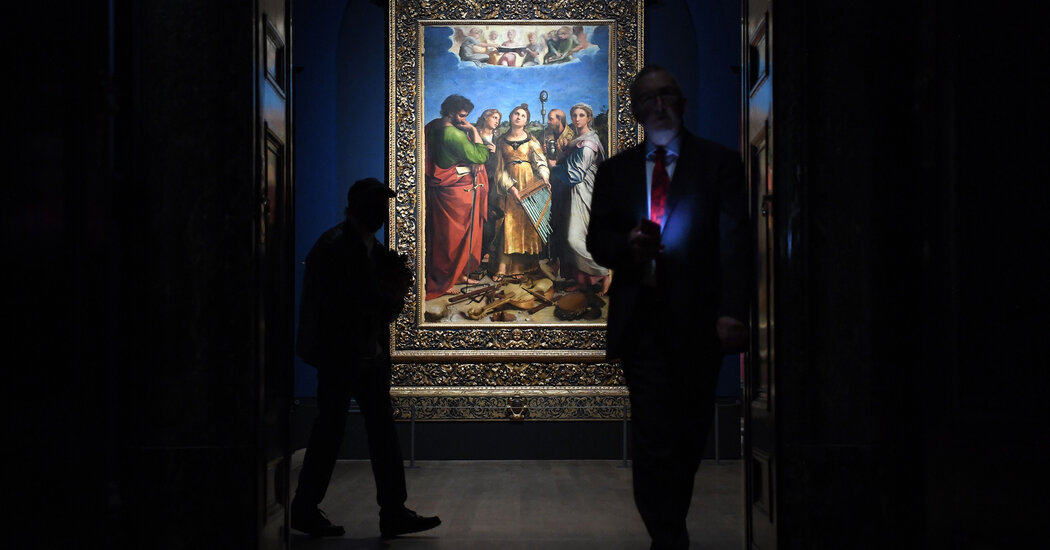 For Britain’s National Gallery, an exhibition by Raphael comes at the right time

LONDON — The news shook Italy and the European continent: on April 6, 1520, Raphaël — painter, draftsman, architect, archaeologist and universal genius — died suddenly at the age of 37.

He had developed a fever about a week earlier, which the 16th-century artist and author Giorgio Vasari, in his “The Lives of the Most Excellent Painters, Sculptors and Architects”, attributed to too much activity in the bedroom. Raphael “continued to amuse himself beyond measure with the pleasures of love”, writes Vasari. “After indulging once more than his usual excesses, he returned home in a violent fever”, and was “recklessly bled” by the doctors.

Five centuries after his untimely death, the National Gallery in London is paying tribute to the great Renaissance artist in a successful exhibition originally scheduled for 2020 (the anniversary year) and postponed by the pandemic.

Ninety objects, including 29 paintings, are on display, illustrating the full range of Raphael’s talents, including his creations of sculpture, tapestries, prints and decorative arts. One of the designs on display is a new find – a 1512-13 study for a small Holy Family scene that curators have decided was created by Raphael, not his workshop.

Plans for the anniversary were initiated around 2015 by the National Gallery. Its director, Gabriele Finaldi, said Raphael was well represented in British collections: at the National Gallery itself (which has 10 paintings by Raphael), the British Museum, the Ashmolean Museum in Oxford and the National Galleries. of Scotland. The show was due to open in fall 2020, on the heels of the world’s largest Raphael exhibition at the Scuderie del Quirinale in Rome. This show opened in March 2020, at the start of the pandemic; closed after three days; and reopened in June with severely limited visitor numbers (groups of six allowed every five minutes).

By then the National Gallery had postponed its own exhibition and was dealing with its own virus problems. The museum has had three periods of closure, so the number of visitors has, according to Dr Finaldi, “very considerably” decreased.

The “Credit Suisse Exhibition: Raphael” opened in April and ends on July 31.

“We’ve been through such turmoil,” Dr Finaldi said. “Raphael is a welcome antidote, not least because his world is one of harmony and peaceful forms.”

Raphael was born in the central Italian city of Urbino. His mother died when he was 8 years old and his father, court painter to the Dukes of Urbino, died when Raphael was 11 years old. The boy was brought up by his uncle, a priest, and he drew and painted in the family studio. since childhood. He was so gifted that he received his first known commission at the age of 17. From then on, Raphael was constantly on the move, traveling to the towns and villages where his patrons and commissions took him.

The exhibition is a largely chronological and visual illustration of the life and times of the Renaissance master. It opens with several of his early altarpieces and representations of the Madonna: immaculately rendered images with heavenly blue backgrounds that reinforce the sense of sanctity and purity exuded by the subjects.

In real life, said Dr. Wivel, the curator, Raphael’s concerns were decidedly more earthly. He was “charismatic and constantly surrounded by people”, but also “very ambitious” and somewhat hubristic. At the unusually young age of 23, he made a self-portrait which hangs in the exhibition. It depicts him with fairly long hair and a dark cap, glancing sideways at the viewer. Even more unusual, while still in his thirties, the artist spent a large sum of money securing a marble tomb inside the Pantheon in Rome, where he is buried.

Raphael’s charm and networking skills landed him one of the most important artistic commissions of all time: the frescoes for the Stanze della Segnatura, four rooms in the papal apartments, near the Sistine Chapel. While working on location, Raphael became known for “taking ideas from Michelangelo and using them without his permission”, much to the chagrin of the elder master, Dr Wivel said.

It was also promiscuous, as evidenced by the stunning portraits of women in the final section of the exhibition – chiefly ‘La Fornarina’ (1519-20), on loan from Rome: a bare-breasted brunette wearing a striped turban and armlet on where Raphaël marked his name in capital letters. She is “believed to be a private likeness of one of her lovers,” reads the wall text.

Raphael enjoyed superstar status for more than three centuries after his death (the exact cause of which remains unknown, despite Vasari’s bedroom theory).

Until the mid-19th century, Raphael was “considered as Shakespeare is in literature” and “recognized as the greatest painter of all time”, said Christian Kleinbub, author of a 2011 book about Raphael and professor of Italian Renaissance art at Ohio State University.

In the 19th century, a clique of British painters, poets and critics led by critic John Ruskin rebelled against the idealization of Raphael as the embodiment of a “very classical, very rational” style, said Dr Kleinbub . The Pre-Raphaelites argued that his style was not an accurate representation, and their criticisms led to Raphael’s fall from art-historical grace.

Ironically for someone so concerned about posterity, Raphael’s legacy also suffered posthumously as there is little direct documentation of his life: most of his writings have been lost, unlike those of Leonardo da Vinci. Vinci, for example, whose writings helped cement his legacy as a genius. rebirth.

“I think the paintings have always charmed us regardless,” Dr. Kleinbub added, noting that the bored pair of angels on the lower edge of the Sistine Madonna are still a popular “campus poster choice.”

He said scholars in recent decades had begun to “look beyond the Raphael of porcelain figurines” and focus on less-examined aspects of his work, such as portraits, “which are not as idealized, are more realistic” and “seem to have individuality”, suggesting an inner world in the style of Leonardo’s portraits.

When you consider these portraits, which were “just as famous, and sometimes more famous, in his time”, Dr. Kleinbub said, “you have it all.”