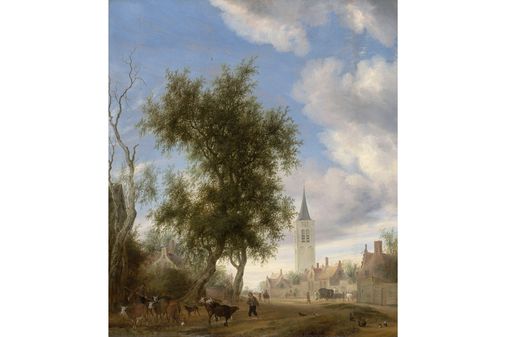 “I am so happy that we were able to quickly reach a resolution, leading to the return of the painting to its rightful owners,” MFA director Matthew Teitelbaum said. “As a museum, we will continue to do our part to determine the rightful ownership of the objects we hold in trust.”

The settlement, which comes amid growing pressure on museums to return stolen items, is one of many claims the MFA has resolved in recent years. In 2017 the museum paid to preserve a group of porcelain figurines sold amid Nazi persecution in 1937, and in 2014 it repatriated a group of looted Nigerian artifacts.

Agnès Peresztegi, lawyer for the Chorins family, praised the MFA’s handling of the claim, saying it had been less than a year since they approached the museum with a formal request.

“It was a model restitution process,” Peresztegi, of Soffer Avocats, said via video chat from Paris. “The fastest I’ve ever seen in my life.”

This is partly because Victoria Reed, the MFA’s provenance curator, had long suspected that the painting’s poorly documented ownership history – it was only listed as coming from a private Swiss collection – masked a more harmful.

Equally disturbing: The painting, which the museum acquired from a London dealer in 1982, had a fragment of an old Hungarian label on its back panel – an indication that he had spent time in Hungary, where the people Jew lost enormous wealth to the Nazis and later to the communist state.

“The mere fact that it came from Hungary raised a red flag,” said Reed, who added that resolving the painting’s murky history of ownership or provenance had been one of his “top priorities” ever since. his arrival at the museum.

Even so, Reed didn’t have much to work with. One of his critical reference books, a 1988 book detailing Hungarian war casualties, had an erroneous picture and description under the entry of Chorin’s Stolen Ruysdael, making it nearly impossible for him to link the MFA painting. to the Chorin collection.

She photographed the back of the painting, contacted the dealer, and matched him with a stolen art database, to no avail.

Reed couldn’t have known it at the time, but Chorin’s family had started searching for Ruysdael’s painting – a little piece of their life that disappeared during the war.

A lawyer, banker and industrialist, Chorin was a prominent figure in the political and economic life of Hungary between the two world wars, heading an influential steelworks and serving as president of the National Association of Industrialists.

He also became an outspoken anti-Nazi, funding opposition movements and helping Jews who fled Nazi-held territories, according to a story compiled by Peresztegi. But while Chorin’s status and wealth protected him more than most, his position became increasingly precarious as Hungary enacted a series of anti-Jewish laws beginning in the late 1930s.

In March 1943, he deposited Ruysdael’s painting – along with works by Alfred Sisley, Jean-François Millet and Charles-François Daubigny – in a safe at the Hungarian Commercial Bank in Pest for safekeeping.

A year later, Chorin and his family went into hiding when the Germans invaded Hungary.

“[W]We had to flee our house within minutes,” Chorin’s daughter, Daisy von Strasser, recalled via email. “Realizing that I had forgotten my new camera at home, I tried to phone one of our housekeepers in the hope that he would bring it to me, but [Nazi officers] answered, and I realized that our lives had changed forever.

Ultimately, Chorin was forced to transfer his fortune, including control of the factory, to the Nazis in exchange for the freedom of his extended family, according to the story. They fled to Portugal and finally settled in New York in 1947.

“Our first lunch in the new world was in a Horn & Hardart cafeteria where you put 25 cents in the vending machine and out came a piece of cake,” von Strasser recalled. “When my mother saw this, she burst into tears.”

By then Ruysdael’s painting had disappeared – looted along with the rest of the vault’s contents during the long siege of Budapest or its immediate aftermath.

Von Strasser said his father, who died in 1964, did not seek the paintings after moving to the United States.

“Instead of trying to recover lost family property, first to the Nazis and then to the Communists, he focused on helping Hungarian refugees,” she said. “With Hungary still ruled by Communists, we took no steps to recover anything as we assumed everything was lost or destroyed.”

She added that the family has sought to recover some of their possessions over the past decades, recovering a painting by Sisley and another by Hungarian master Mihály Munkácsy.

Yet there was no trace of Ruysdael’s painting.

Or so it seemed until 2019, when the MFA’s Reed received information from scholar Sándor Juhász that the painting had belonged to Frigyes Glück, a Hungarian hotelier who died in 1931.

“At that time, I just updated the online record,” Reed said. “We still had no indication that it had been looted or stolen, but at least we had a new name we could put in the provenance.”

The updated online entry proved essential to attorney Peresztegi, who knew that Chorin had likely purchased the painting from Glück’s estate and had gone through the records on behalf of the family.

From there it was just a Google search.

“I just did an internet search,” said Peresztegi, who was able to match the partial Hungarian label on the back of the painting with documents from a 1919 exhibition and a file photo of the painting. “There’s no way that [Reed] could have figured it out based on what was on the back. It is simply not possible.

Reed, who quickly recognized the strength of the case, said the MFA’s collecting standards are stricter today than when the museum acquired the painting nearly four decades ago.

“I don’t think we would accept a painting like this [today], specifically with an indication that it was from Hungary, with no further information on where it came from,” she said. “The level of due diligence we would do for a new acquisition has changed dramatically.”

Von Strasser said his father, who never returned to Hungary, would have been “thrilled to learn that a form of his former life had been found”.

“I don’t think he would have made much noise about it,” she continued. “He would have looked at this painting and thought that no matter what they might have lost in Hungary, they were the luckiest people in the world because they were all alive!”