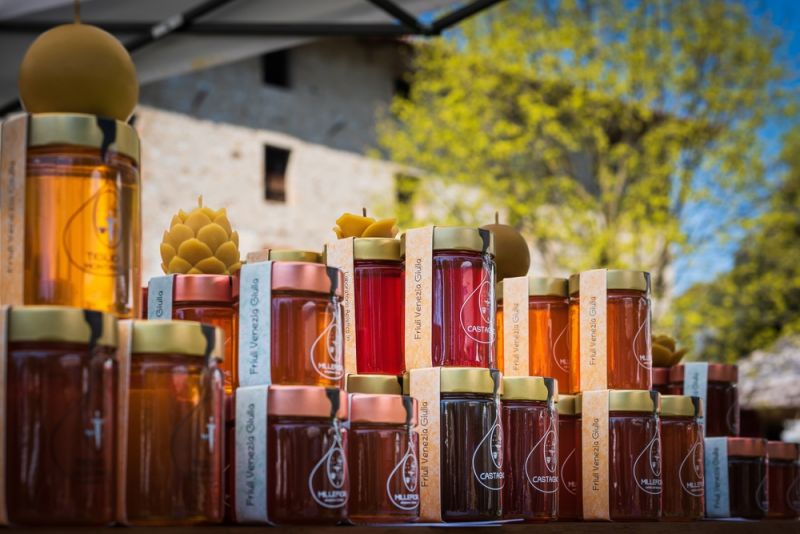 Honey in Italy: a brief introduction

Just like good wine, Italian honey has centuries of tradition behind it.

There are more than 300 types of honey on the market in Italy with different colors and flavors depending on the plants from which the bees get the nectar.

The most common is millefiori honey, but there are also many varieties of monofloral honey.

How to choose? Among the most used in Italian cuisine is acacia honey, which has a delicate taste and is the most suitable if you do not want to cover other flavors.

Linden honey, very sweet and aromatic, is ideal for desserts.

Chestnut honey and strawberry tree honey, on the other hand, are rather bitter and go well with meat main courses, charcuterie boards and cheeses.

Now that we’ve got our mouths watering, let’s dive into Italy’s long history with honey, how the United States turns to Italian bees to preserve the species, and what to look for when looking for honey. purchase of the best honey in Italy.

The history of honey in Italy

There are many archaeological finds of man’s love for bees and honey from Greek and Roman times.

Thriving in a particularly laborious way, with the queen at its head, bees are a perfect symbol to represent royalty (think of the Barberini Bees of the powerful aristocratic family).

In ancient Rome, the products of the hive were widely used and several testimonies highlight the various aspects of beekeeping: the collection of honeycombs from the cavity of a tree in an allegorical painting, or the stages of breeding with round beehives prominent in the sepulchral relief of aristocrats. Titus Paconius Caledus and his wife Octavia Salvia (1st century BC).

Reliefs of bees inside medieval Castel Sant’Angelo in Rome

Places famous for their production of bees lined the Mediterranean coasts and mainly included Greece, Egypt and Sicily.

In Sicily, the first documented records of beekeeping date back to the times of Magna Grecia. Theocritus, in 300 BC. J.-C., praised the honey and the bees of the region of Ibla.

In Ibla, beekeeping was certainly important even before the Greek invasion, and it was particularly important in the region of Pantalica where, from 1250 to 700 BC, according to historians, was the capital of the Sicilian state of mythical king Hyblon of the bees.

The Sicilians took over from the Greeks and made the bee an object of worship. The myth of Aristeas, son of Apollo and Cyrene, who, having learned from the nymphs the art of raising bees, cultivating vines, olive trees and making cheese, spread his knowledge throughout Greece and Italy.

The myth of Aristeas is also present in Sardinia; the discovery of a bronze statuette representing a man with a body covered with bees, a hero who taught the Sardinians the cultivation of olive trees and vines, the processing of milk and beekeeping, dates back to 1843.

In Sicily, Iblean beekeepers proceeded to harvest without killing the bees, thanks to the particular structure of the hive which allowed them to open and extract the combs with honey while leaving the core intact; similarly, in Sardinia, the hives were “emptied” before taking the honeycombs.

In the Sardinian tradition, the extraction of honey was done by pressing the combs by hand or by pressing. Comb pressing was the technique used by Sicilian beekeepers, and the honey obtained was much richer in pollen than honey.

With such a technique, considerable quantities of wax were obtained, which were destined for various uses: candles, cosmetics and arts and crafts.

In the Sicilian tradition, wax remains filled with honey and pollen were crumbled in hot water and left to ferment to obtain alcohol. One of its uses was to produce thyme honey liqueur, a drink mentioned by some ancient Roman authors as a drink for the wealthy.

Human intervention with bees has been practiced for a long time; as soon as Pliny reported the transport of beehives along the Po river on boats.

Until the beginning of the last century, in Calabria, women were seen in groups wearing beehives on their heads at night. In Sicily, the movement of bees was entrusted to mules.

Bee scientists from the United States came to Italy to improve the genetic variability of their bee populations.

One of the causes of high bee mortality in the United States, according to a research team from Washington State University, is the depletion of genetic variability in honey bees. This left them short of genetic traits that could help them resist varroa mites, a common bee disease.

Susan Cobey, geneticist in the WSU Department of Entomology and queen breeder, explains why: “Bees weren’t native to the American continent, we brought them here, but in 1922 the United States closed its borders to bee imports to prevent the spread of Acarapis woodi (the tiny trachea mite that did so much damage a few years earlier in the UK) and since then our bee populations have interbred with each other others.”

And that’s why Susan Cobey and some of her collaborators have been traveling across Europe and Asia since 2008 to collect sperm from native bee drones in Italy, Slovenia, Germany, Kazakhstan and the Republic of Georgia. , countries where bees have favorable genetic characteristics. , such as resistance to varroa mites.

Beekeeper and honey production in a nature reserve in Modena, Italy

Italian beekeepers became increasingly aware of the risks of dissipating the variability of bee species, even in Italy, and undertook great efforts to prevent the extinction of various subspecies.

The best honey in Italy

Whether you like classic millefiori, acacia, chestnut, eucalyptus, linden or honeydew, it doesn’t matter, Italy is rich in quality honey with special characteristics.

Many Italian beekeepers are engaged in the production of honey. But what are the best honeys?

The Tre Gocce d’Oro competition, a competition among the best honeys in Italy organized by the National Honey Observatory, which was held in September in the outskirts of Bologna, is now in its 42nd edition.

A collection of colourful, active hives with bees collecting honey, in Sicily, Italy

– The Thousand Honeys, the Millefiori

– The Great Honeys of Sicily

– The Great Honeys of Puglia

– The Great Honeys of Abruzzo

If you’re lucky enough to try any of the solutions above, one of the best ways is to use a slice of pecorino cheese to contrast the sweetness and bring out the flavor. Here is the list of winners for 2021.

What makes one honey better than another?

When buying honey from an Italian supermarket, be sure to check the label to find out where it comes from.

In recent years, Italian honey producers have sounded the alarm over what they call “fake honey” imported from China. It is a product created in the laboratory, with the addition of sugar syrup and with production methods that do not comply with European standards.

We encourage you to buy honey produced by small local businesses in specialty stores or local markets. Or buy it directly from the producers.

Most Italian beekeeping companies have their own website with a section for online shopping.

Don’t be fooled by the special offers: the honey must be paid for at a decent price which cannot go down, for example for a millefiori, below 10 euros per kg.

Climate change is making life very difficult for bees and also for those who have chosen to raise them professionally, but bees in Italy are producing a lot of honey this year.

President of the Biella Beekeepers Association, Paolo Detoma, said: “It will be one of the best years for honey. The frosts that we feared in the spring did not occur and flowering is perfectly normal: we will have an excellent product.”

Besides climate change, one of the problems facing the Italian honey supply is the lack of space uncontaminated by industrial agriculture.

An innovative plan has encouraged the proliferation of urban beehives even on city rooftops. In Turin, 120,000 bees have been placed in the city as “sentinels of the environment” and will produce 20 kilos of honey.

What is certain, however, is that the demand for honey is there and also increasing. In Italy, honey has been rediscovered as a food to be used in the kitchen not only for breakfast but also for the preparation of other meals.

Next Christmas, go to Naples for a glass soaked in honey Struffoli and you’ll get an idea of ​​how the Italians make honey a star ingredient in their cuisine.

The Netherlands allocates a loan of 200 million euros to Ukraine