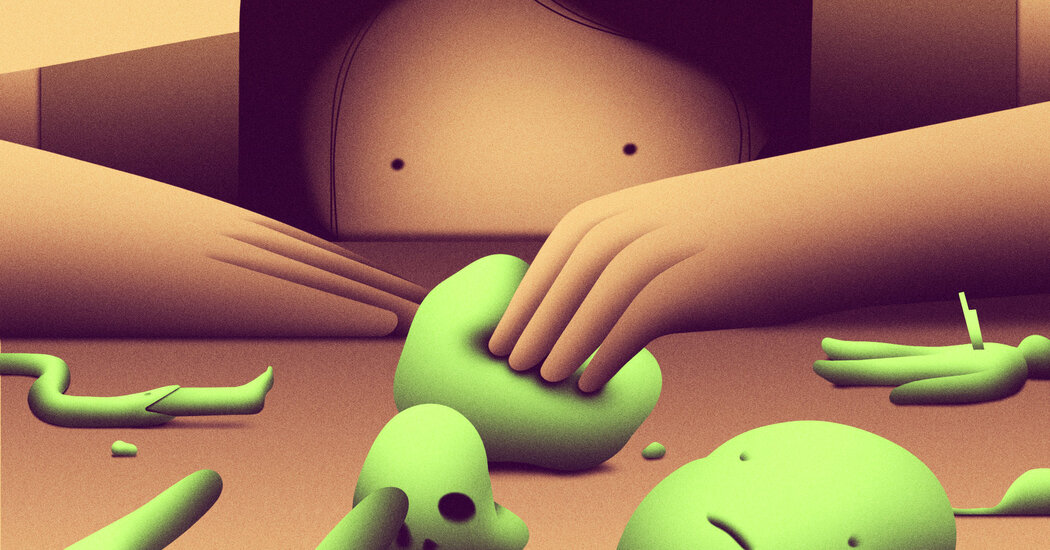 Around this time, I found two small boxes of Play-Doh at the back of my desk drawer in the lab, left behind by a former occupant. It was around Halloween, and those Play-Doh boxes were neon pink and vomit green. I began to make tiny macabre figures adapted to these horrific colors: a person half buried in quicksand, a corpse with a knife in its chest, a swarm of rats surrounding a decapitated head, a snake with a paw of zombie in the mouth, more snakes crawling out of the sockets of a skull. â€œWatch how I’m drowning,â€ I said via play dough. “The person I was when I started this path has passed away and I don’t see a future.”

Morbid as they were, my clay figurines brought back to my life a lightness that I had forgotten. Who knew how meditative it could be to roll clay in your palm? When I did, my mind was no longer cluttered with my relentless to-do list, the next 10 steps in my experience, or the prospect of 16 weeks wasted if my experiment failed. I was concentrating only on pinching a piece of the Play-Doh cylinder, kneading the moist mass between my fingers to soften it, and rolling the warmed mass into a perfect sphere. From there, I gently crushed the pasty skull-shaped sphere, forming eye sockets with my thumb, outlining the teeth with light nail indentations. By rolling a smaller sphere between my palms, I was able to lengthen it into a snake, then squeeze a thinner clay tube around the snake to make stripes. It only took about 20 minutes to make a simple action figure, but during that short period of time I lived outside of my endless anxieties.

Late at night, creating something recognizable out of a shapeless mound of Play-Doh gave me the greatest sense of satisfaction I had felt in years. This is how I had imagined my life as a craftsman. And, unlike my academic pursuits, clay was something that didn’t have to be perfect, given the low stakes. Unlike an experiment, or even some other more permanent art form, Play-Doh didn’t require any prior planning, skills, or discipline. If the skull I cast wasn’t quite right I could put it back into a ball and start over, then start over until I was satisfied with what I had done – an approach I had. too afraid to apply to the rest of my life. With Play-Doh, I began to practice courage, building myself up to finally leave what I perceived to be the safety of academia and start over.

I used up the entire Play-Doh in a matter of weeks, and the grotesque figures sat dry and cracked on my desk for the rest of my graduate school. They ushered in a period of intensive creative research: I spent the following years trying to integrate my interests into a career through journalism, podcasting, and stitching together the poems that would become my first book. Perhaps that would give Play-Doh too much credit to say that it inspired these activities. But every time I felt stagnant or exhausted and looked at these clay figures, it reminded me that I had made some perfectly recognizable scenes with plasticine designed for children.

In other words, I could be resourceful and create my own way forward, a reminder that would help me navigate the uncertainties of postgraduate life and the pandemic. Mostly, it reminded me how much I love to do things. And I was no longer willing to sacrifice it indefinitely. My mother taught me that life was too short.