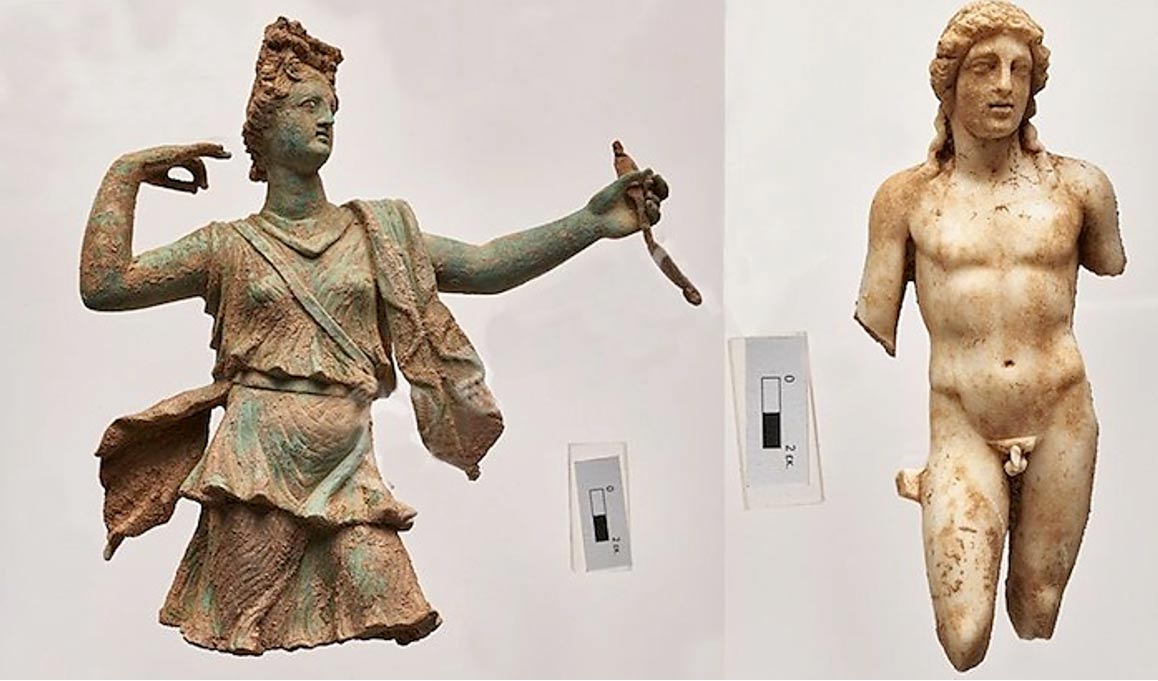 The Chania Antiquities Ephoria presented the public with a group of small statues depicting the twin gods Artemis and Apollo at the Archaeological Museum of Crete on July 24, 2019.

The priceless statuettes were found during systematic excavations that took place at an archaeological site in the ancient city of Aptera, under the direction of archaeologist Vanna Niniou-Kindeli. The excavations were funded by the Region of Crete.

The presentation was considered extremely culturally significant, as the statues are beautifully rendered and well preserved for their age – dating back to the beginning of the second century. They are believed to have been imported from art centers outside of Crete.

The Ephorate announcement stated that: â€œArtemis, the patron goddess of Aptera, is made of copper, while her twin brother Apollo is made of marble. The goddess stands on an elaborate box-shaped copper base and is depicted in an intense stride, wearing a short, slender chiton, and she is ready to shoot. Although Apollo is portrayed in a more modest way, his attitude reflects an internal tension.

The spectacular finds were presented as a new edition of the permanent collection of the Archaeological Museum of Chania.

The Titan goddess Leto had been one of Zeus’ lovers even before she married Hera. However, when Leto got pregnant with Zeus’ twins Artemis and Apollo, Hera and Zeus were already married. This naturally made Hera extremely jealous.

In revenge, Hera made it nearly impossible for Leto to find a place where she could give birth. Leto wandered the world, but no one wanted to upset Hera by offering her shelter. Leto finally found respite on a small floating island.

Her labor pains lasted a long time, and after nine full days, she gave birth first to Artemis, then to Apollo. From that point on, the island was known as Delos, and it became permanently attached to the seabed below.

The island of Delos is a true UNESCO World Heritage Site that you can visit in Greece, right next to the larger island of Mykonos. The island is rich with its own famous archaeological wonders to take visitors back to the world of antiquity.

There are extensive excavations on the island, revealing ruins that depict Delos as a sacred sanctuary dating from a period even before Greek mythology designated it as the birthplace of the Greek gods Apollo and his twin sister Artemis. .

Surprisingly, some ruins of ancient stone huts on Delos date back to the 3rd millennium BC.

Rare photographs of the 19th century Greek island of Delos excavations have been revealed in a new book written by a team of French archaeologists.