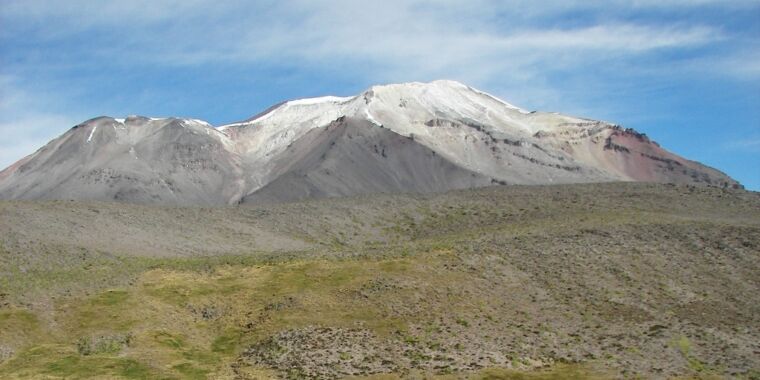 A recent toxicological analysis of the 500-year-old remains of two young children sacrificed during a ritual atop the Ampato volcano in southern Peru showed that the children’s hair and fingernails contained traces of cocaine, as well as two chemical compounds from a flowering vine that is a key ingredient in the psychedelic drink ayahuasca.

The compounds in question, harmine and harmaline, are both part of a group of antidepressants called MAOIs (monoamine oxidase inhibitors). The only possible place where the Inca could have found these compounds is the flowering vine known to modern science as Banisteriopsis caapi– and to the indigenous Quechua people as “vine of the dead”. Famously, the vine is one of two main ingredients in a ritual drink called ayahuasca, which can induce hallucinations or an altered state of mind.

But the analysis found no trace of the compound DMT (N,N-Dimethyltryptamine), which makes ayahuasca such a powerful hallucinogen. This compound comes from the other main ingredient in ayahuasca, a shrub called chacruna (which, by the way, is a relative of the plant that gives us coffee).

His absence could simply be a whim of chemistry. Toxicological studies of at least one victim sacrificed from another site also found no DMT, but did find a chemical compound that is produced when the body metabolizes DMT. This supports the idea that DMT may not be one of the chemicals stored in keratin, which means University of Warsaw archaeologist Dagmara Socha and colleagues cannot rule out the administration of ayahuasca to the children of Ampato.

Still, the lack of DMT in the hair and fingernails of Ampato’s victims could mean they drank something that contained the creeper of the dead but not chacruna. And if so, it seems very likely that the purpose was not to give them religious hallucinations but to keep the children calm on the long procession to their death.

“If so, this would be the first example of the conscious use of the antidepressant properties of the ayahuasca drink consisting primarily, if not entirely, of Banisteriopsis caapiwrote Socha and his colleagues in a recent article.

They saw it coming

The two children, both aged 6 to 7, died victims of an Inca ritual called capacocha. Throughout the Inca Empire, priests sacrificed young women and children as young as 3 years old to local deities called huacas.

For weeks before the sacrifice, the victims knew exactly what was about to happen to them. Victims chosen from the remotest corners of the Inca Empire were to gather in the capital, Cusco, before embarking on long processions to the places where they would die. Sometimes that meant a long trip home, and sometimes that meant a trip to another province in the empire.

This experience must have been overwhelming for the young children, even without the terror of sacrifice hanging over their heads. And it just wouldn’t be enough for the intended victim, who was supposed to be pure and beautiful, to cry about it. The Spanish colonizers, who described the rituals they witnessed, wrote that the mood of the victim was as important as their appearance; the sacrifices were supposed to go happily to the huacas.

The solution? Calm victims down with drugs and alcohol. According to the Spaniards, Inca priests kept their doomed victims happy and calm with a steady diet of an alcoholic beverage called chicha.

Toxicological studies of the mummified remains of several capacocha victims from Peru have found evidence that they had also chewed coca leaves for weeks before their deaths, and some died with their last dose still in their mouths. Often it seemed that the children chewed more and more coke as the ritual got closer. In the hair of a victim at another site, archaeologists found a compound called cocaethylene, which forms when cocaine combines with alcohol in a person’s body.

In other words, Inca priests would spend several weeks drugging young children into happily submitting until it was time to ritually murder them. The horror of this scenario is not outweighed by the fact that there was obviously a fairly advanced level of pharmacological knowledge behind the choice of drugs.