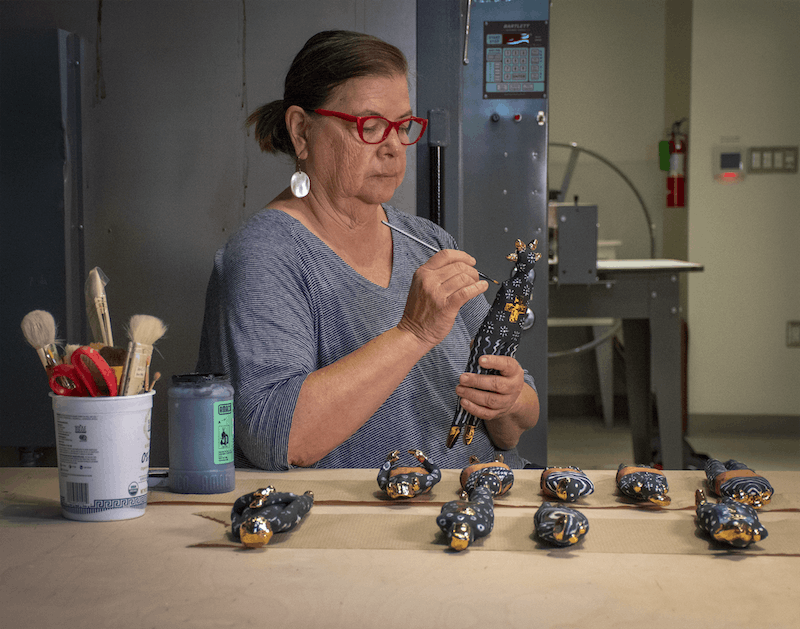 In a live conversation, Fields discussed his works in Hood’s current “Form and Relation” exhibition.

On October 13, clay and textile artist Anita Fields participated in a live conversation moderated by Hood Museum of Art Curator of Indigenous Art Jami Powell. The conversation focused on Fields’ practice as well as his work “So Many Ways to Be Human”, which is part of the “Form and Relation: Contemporary Native Ceramics” exhibition which runs from January 2021 to July 2022. Six Indigenous artists are included in this exhibition, which focuses on themes such as community, land, gender and responsibility. Dartmouth Ceramics Studio Director and Instructor Jennifer Swanson moderated the conference.

Fields, who studied painting at the Institute of American Indian Arts at Oklahoma State University, created thirty small figures for the Hood that were installed on a diamond-shaped wall. Powell noted that this shape allows viewers to see the multiplicity of the installation.

These little figures are mounted and displayed on a mauve wall, with black and white bodies contrasting with the gold leaf accents that surround their various body parts. With sartorial accents made of various materials added to just certain figures, each has intentionality in design, appearance, and positioning.

Powell noted the importance of having up to thirty characters on display at the Hood at a time.

“I’ve been following Anita’s work for decades, and she creates these figures and has only ever had five or six on display together at a time,” said Powell.

Lily Gray ’24, who visited the exhibit, noted how the seriality of the figures contributed to her understanding of the work.

“The artist’s ceramic figures are beautifully intricate and unique,” ​​said Gray. “Each doll is compelling and interesting individually as well as with the collective.”

Fields used a variety of materials for the figures, including pieces of cloth, gold leaf, and paper, some depicting a map of Osage County. Fields noted that she and her daughter would keep any information they could find on the Osage, which helped her build those numbers.

“I want to dispel the many myths that have been written about us,” Fields said.

As a member of the Osage Nation, Fields explained how the characters explore the dualities within the Osage culture.

Swanson asked Fields about the intentionality behind the characters’ doll qualities; Fields replied that she did not see them as dolls, but rather as characters.

Many of the characters are unrealistic – some have no arms – but Fields emphasized their representational value.

“I don’t see them as missing anything, I see them as representing the human spirit,” Fields said.

Fields’ other works in “Form and Relation” are the landscape “When Referencing the Earth and Sky”, now in Hood’s permanent collection, and the ceramic sculpture “Reconstruct, Conversion, Here”.

Fields said the landscape piece was inspired by his travels with a group of Osages.

“It had a very profound impact on the way I started to think about the landscape,” Fields said. “The landscape keeps the memory of the cultures that were there first: who lived there, who went there. “

Fields’ noted in the lecture that his love of the material is central to his practice, dating back to his grandmother teaching him to sew. Her work is also inspired by traditional Osage clothing and Osage ribbons.

“I can use these kinds of objects as metaphors. . . trying to translate how beautiful our culture is, ”she said.

Fields referred to other recent work she had done explaining her creation of a megaphone to represent the need for change illustrated over the past year. The interior of the megaphone is sprinkled with golden lead to represent the importance of the information depicted, as Fields hoped to encourage viewers to examine what is going on in the world.

In the last ten minutes of the conversation, the conference was opened for questions from the public. Many were specific to individual characters in “So Many Ways to Be Human,” such as the questioning of intentionality to position oneself behind one who raises a fist and another with a golden foot.

When interviewed, Powell explained how this event was originally intended to bring Fields to the Dartmouth campus for a live interview and workshop, explaining how COVID restrictions halted those plans and caused change.

“Originally the plan was to get Anita to come to campus and be here in person, and she was going to be doing the talking in the galleries but also having an in-person workshop in the ceramic studio at the Hopkins Center for arts, ”said Powell. “With the delta variant and not being sure whether to travel, we decided to just switch to a virtual program for conversations and connections, but I think I still hope to bring Anita to campus to do an in-person workshop. . ”

What “things” will my children remember me by? Hope these are not my phone chargers