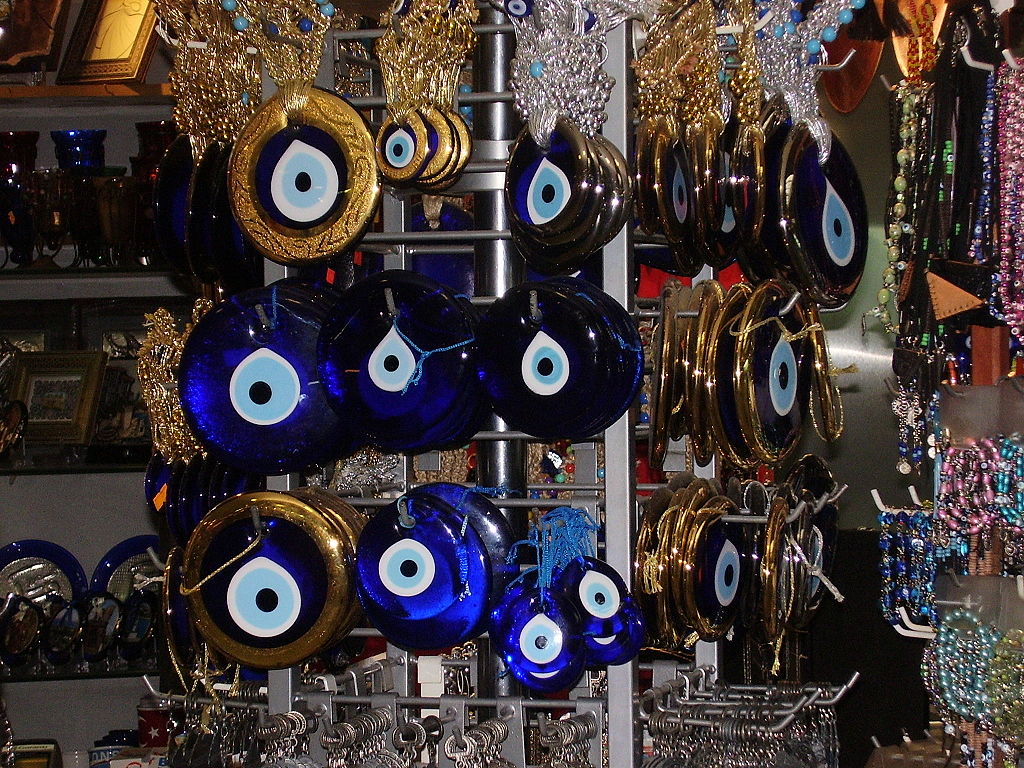 Officials from the Israel Antiquities Authority recently first exhibited a 5th-century Evil Eye pendant that served as a talisman against evil that had been unearthed some time ago in the Galilee region.

The pendant was unfortunately in private hands but its owner recently decided to share the amazing object with the world by donating it to the IAA.

The necklace and pendant, dating from around 1,500 years ago, were discovered 40 years ago in the village of Arbel in the Galilee by one of its first inhabitants, the late Tova Haviv, according to a press release from the ‘IAA.

It was recently handed over to the Israel Antiquities Authority by a member of his family. The pendant, which has a triangular shape, shows the figure of a person with a halo riding a horse.

The rider is shown throwing a sphere at a female figure on the ground, surrounded by the inscription, in Greek, “The One God Who Conquers Evil”. Under the horse appear the Greek letters IAW Î˜, which are the equivalent of the Jewish divine name of YHWH, or God.

The opposite side of the object depicts an eye pierced with arrows and surrounded by dangerous animals – two lions, a snake, a scorpion and a bird – as well as another Greek inscription stating â€œOne Godâ€.

According to Dr Eitan Klein, deputy director of the IAA’s Antiques Theft Prevention Unit, the amulet is “part of a group of 5th-6th century Levantine amulets that were probably produced in Galilee and Lebanon.

This group of amulets is sometimes referred to as the ‘Seal of Solomon’ and the horseman is depicted defeating the evil spirit – in this case, a woman identified with the mythological figure Gello / Gyllou, who threatens women and children and is associated with the evil eye.

â€œThe eye on the reverse is identifiable as the evil eye, attacked and defeated by various means. The amulet was therefore probably used to guard against the evil eye, possibly to protect women and children, â€he adds.

Significantly, during the Byzantine period, Arbel was a Jewish settlement, which was often mentioned in the Talmud, and the artifact dates back to this exact period. And perhaps most remarkable, the presence of the talisman there suggests that even Jews of this period wore amulets of this type to protect themselves from the evil eye and demons.

In the statement, the IAA states: â€œWe thank the donor of the amulet for showing good citizenship! Objects like this tell the story of Israel’s history and heritage, and they belong to all citizens of Israel, both legally and in terms of cultural value.

The evil eye, or Mati, in Greek, is an ancient Mediterranean symbol that is part of a curse or superstitious legend.

It has always been believed that a curse can be cast on a person by a malicious gaze, which is usually given to a person when they are unaware. The concept of the evil eye dates back at least to classical Greek antiquity, in the 6th century BC. ).

People from many cultures around the Mediterranean believe that receiving the evil eye will cause misfortune or injury, while others believe that it is some kind of supernatural force that casts or returns a malicious gaze on those who wish. harm others (especially the innocent). ).

Talismans or amulets created to protect against the evil eye are generally referred to as â€œevil eyesâ€ themselves and can appear on almost any object, from a glass bead to the bow of a Mediterranean fishing boat.

Old iterations of the symbol were often made of ceramic or clay. However, after the production of glass beads began in the Mediterranean region around 1500 BC, evil eye beads were popularized by the Phoenicians, Persians, Greeks, Romans.

Blue was probably used because it was a relatively easy color to create in glass; However, modern evil eyes can be available in a range of colors, although most are by far a piercing cobalt blue.

The idea expressed by the term is leading many different cultures to take protective measures against it, with around 40% of the world’s population currently believing in some form of evil eye power.

The concept and its meaning vary widely among different cultures, but it is particularly important in the Mediterranean and Western Asia. The idea appears several times in Jewish rabbinical literature, so perhaps the existence of the Israeli pendant should come as no surprise.

While the Egyptian Eye of Horus is a similar symbol, it represents protection and good health, unlike the Greek evil eye talisman, which specifically protects against malicious gazes.

Likewise, the Eye-Idols (c. 8700-3500 BC) excavated at the Tell Brak Eye temple are said to be figurines offered to the gods, and according to the Metropolitan Museum of Art, they are not related to a belief in evil. eye.

When it comes to traditional Greek beliefs, the evil eye is by far the greatest Greek superstition. It is believed that someone can look down on another person out of envy (good or bad) and jealousy.

It is said that you are “matiasmenos” (“the evil eye has been cast on you”) if you are dizzy or have a headache and yawn a lot. Most Greeks feel under the spell of the evil eye if they are too handsome or too rich.

The good news is that you can have someone break the “spell” who knows how to perform a special ritual with oil, water, and prayers. Or, surprisingly, now with the help of modern technology, even using an app on your cell phone.

Whatever category they believe they belong to, many Greeks rush to the “Xematiastra”, the woman who knows how to return “To mati”, to find relief from the ancient curse.

The history and evolution of typography

An anniversary, mystery and milestone: the library celebrates its 30th anniversary | News from Parc d’Estes