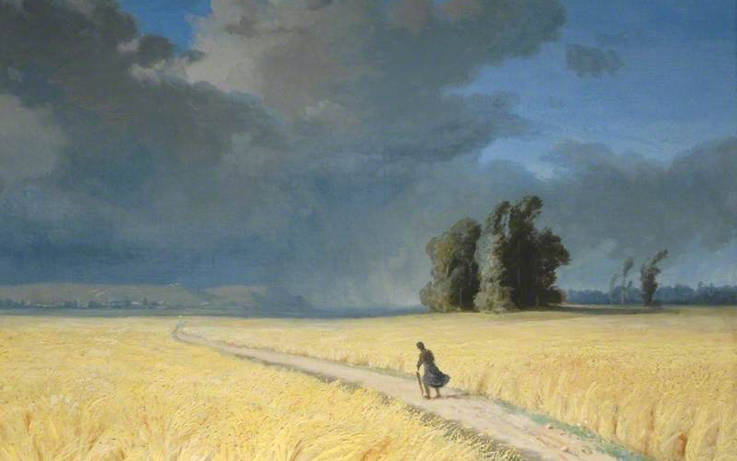 In an occasional column, Dorothy Blundell takes a sideways look at the collections at the Bowes Museum where she volunteers

It is the middle of summer and the crops have not yet been harvested. The blue sky is slowly being consumed by bright, towering clouds… there is a storm approaching. In the foreground, we see from behind a small figure of a man on the track which cuts the ground in two. He leans into the wind as he rushes back into the distant village. He is carrying his umbrella because it is not raining yet and the wind is strong.
This evocative image (below) was painted by Josephine Bowes and is on display at the Bowes Museum. It’s a neat composition and a good example of how she liked to portray large views. But there’s animation too – see the man’s coat flapping behind him and how crops and distant trees sway in the wind. Her title is Cornfield near Calais, a town where she is said to have stayed with her husband, John, on occasion as she prepared to cross the English Channel or while awaiting her return from England.
In Josephine’s artistic life, a parasol was part of her painting expedition kit. In addition to canvases, tubes of “colour”, an easel and a mahlstick to stabilize the hand, a parasol was essential to shade the canvas and allow a more accurate judgment of the tones in full sun.
John usually accompanied him on his painting excursions. Perhaps he carried an “umbrella” in case of showers. Although in wet weather, it’s inconceivable that he sang and danced a la Gene Kelly in Singing in the Rain. Yet in the metal collection is a silver figurine evoking the musical actor and the film’s famous routine with an umbrella dance partner. In reality, the figurine is French, made around 1840-50 and serves, quite prosaically, as a toothpick holder.
The umbrella was invented more than 4,000 years ago to protect against the sun (in Latin, “umbra” means shade). It has been called many things from “bumbershoot”, “gamp” and “brolly” and, in addition to being a portable shelter from the elements, its uses include cocktail garnish at one extreme and, at the other, a spy’s lethal weapon.
Back in the ceramic galleries of the museum, we find Paul Pry.
He is dressed in his signature striped pants and yellow top hat and he carries his trusty umbrella rolled up under his arm. Paul Pry was the eponymous hero of an 1825 farce by English playwright John Poole. The role was played by John Liston (c1776 – 1846), described as “a fellow with a snub nose, flushed cheeks, and exceedingly broad buttocks”. Liston apparently only had to get on stage for the audience to laugh.
The farce centers on a comically mischievous man who is a troublesome nosy. Everywhere he goes, he “forgets” his umbrella – in truth, he leaves it behind for an excuse to come back… and listen. All ends well, as Pry’s indiscretions help catch more serious troublemakers.
Thanks to Liston’s comedic genius, he made Paul Pry seem real to the public, so much so that images of Liston as Pry appeared on signs, stores, warehouses, handkerchiefs and snuffboxes.
Porcelain factories produced figurines of Liston as Pry, such as the one in the museum which was made around 1820 by Staffordshire Pottery and is part of the Lady Ludlow collection.
Let us return finally to the coast and to Beach Scene at Low Tide (1867) which shows groups of people taking the air or strolling on the sand. It’s a cloudy day, but it’s not raining so maybe the prominent umbrellas are superfluous in that sense. But then again, perhaps not in an artistic sense, as it was Eugène Louis Boudin (1824-1898) who depicted this subject many times and used the prop to help set the mood of the scene .
Boudin is best known for his beach scenes, seascapes and other landscapes and for capturing ever-changing weather conditions or the effects of light, depending on the time of day. He was one of the first French landscape painters to paint en plein air and had a huge influence on the Impressionists, especially his friend Claude Monet. And at the National Gallery of Art in Washington DC is one of Monet’s famous works… Woman with a Parasol.
The Bowes Museum is open daily from 10 a.m. to 5 p.m. More details on the website: thebowesmuseum.org.uk