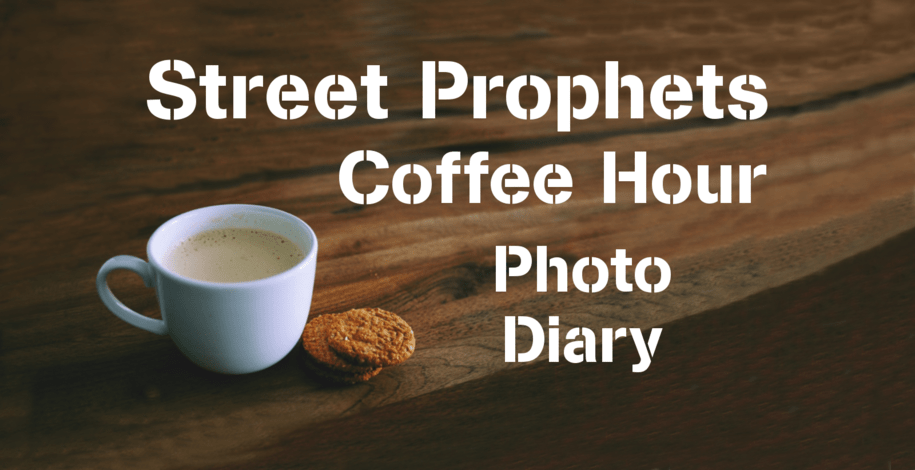 Hello and welcome to Street Prophets Coffee Time! This week I have the great pleasure of sharing a hobby that I have enjoyed for many years: collecting Japanese cat figurines known as Maneki Neko.

Cats, real and imagined, have featured prominently in Japanese culture and daily life for millennia. However, the oldest known mention and depiction of the famous Maneki Neko dates from 1852. Pictured above is a vendor selling clearly identifiable maneki neko figurines. There are a few different origin stories and at least two ancient temples that take credit for being the birthplace of the “lucky cat” figurine. The name Maneki Neko translates to “beckoning cat”, and it is believed that the charming little cat would invite customers into the business by displaying it. They can be seen in restaurants and other businesses in Japan and around the world. In someone’s house, he invites good fortune. These days they come in many different colors. Each color has a specific meaning. The same goes for the raised paw – left, right or both.

Considering how popular they first became nearly two centuries ago, and how much that popularity has grown since then, it’s possible that maneki neko is a pop culture sensation that’s been around far longer than most.

Most of the sources I have read say that a raised right paw is supposed to invite good luck and prosperity into the house; a raised left paw attracts customers (and their money) to a business. Some also say nekos with raised right paw are male cats, raised left paw are female. Still others claim that these male cats that raise their right paw relate to daytime businesses like shops and offices…while their left-pawed female counterparts relate to nighttime businesses such as bars and venues. Entertainment. And then there are those who have both legs up. Which, from what I’ve seen, represents the “banzai!” (ten thousand years!) gesture. Like this little cat who encourages you and encourages your success.

Unlike the traditional animal figurines displayed every New Year – Chinese zodiac animals, which change every year – maneki nekos are displayed year after year. The cat has no place in the Chinese zodiac; an entire (and hugely popular) manga series and accompanying anime series, Fruits Basket, were created around this storyline. I confess that I really liked the manga and I read all the episodes that I could find. The character of Meowth, from the hugely popular Pokemon phenomenon, was based on Maneki Neko. As was the character of Ms Fortune, from the Neko Atsume video game a few years ago. (I also liked Neko Atsume. Don’t judge me.)

Maneki Nekos are so beloved in Japan that they have their own special day, September 29. And a museum of their own – www.okayama-japan.jp/…

A brief (but not definitive) look at what the different colors mean – white represents spiritual purity and promotes happiness. Black is meant to protect the health of a household and to protect against disasters. Green is for students, to help them develop study habits and pass tests. Pink is, predictably, for success in romance. Gold, also predictable, is about protecting and increasing one’s wealth. Blue encourages you to dream big and go all out to fulfill your heart’s desire; other sources suggest that blue promotes road safety and safe driving habits. The color red itself has cultural significance in Japan, and a red maneki neko serves to banish evil and ward off serious illnesses. Calico cats are considered particularly lucky in Japan, and calico nekos are no exception.

Many of them would be considered kitsch by many people. There are, however, some truly exquisite maneki nekos made in the distinctive style known as Kutani. Which are unfortunately way out of my price range, but beautiful nonetheless – www.ebay.com/… (not necessarily promoting eBay, they just have good examples)

Almost all of mine have written on it. Which, alas, I cannot read. It would be interesting to know what these messages say.

There are many beautifully illustrated children’s books recounting the legends of the Maneki Neko. I have two that are aimed more at adult collectors and admirers of Japanese art.

I hope you had as much fun reading about my collection as I had sharing it with you. Thanks for the reading.

This is an open topic, all topics are welcome.

What are the differences in each edition of Dying Light 2 Stay Human?