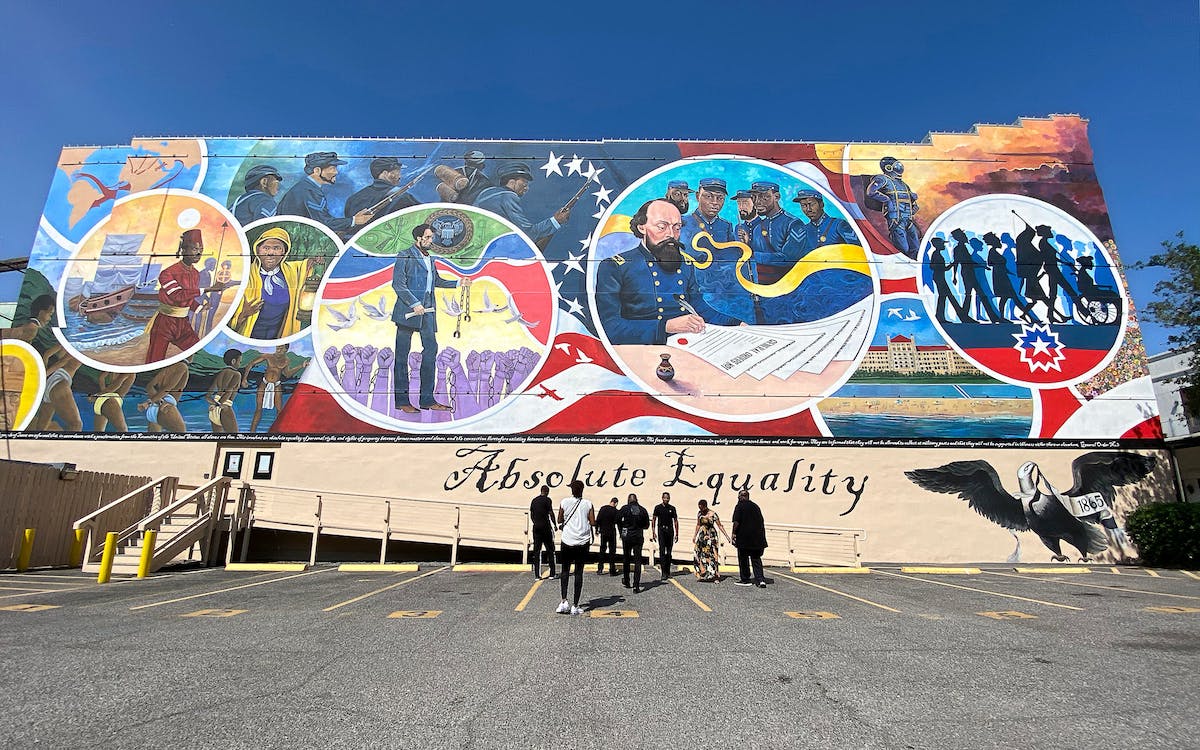 For 27 days in March and April, Reginald Adams and his team of five artists transformed a previously indescribable gray wall in downtown Galveston. Using lifts and over three hundred gallons of paint, the group calling themselves the Creatives set up camp in an empty parking lot. While painting, Adams passed the time with reggae music in his ears. Curious tourists and passing locals often stopped to watch and chat with the artists, who explained the significance of where the Old Galveston Square building stands today, surrounded by gift shops. It was here on June 19, 1865, two and a half years after the Emancipation Proclamation, that a Union general read the statement that finally let the enslaved Texans know they were free. Now, as the Juneteenth vacation gains national prominence, a 5,000 square foot mural titled Absolute equality makes it impossible to ignore this vital and long overlooked moment in Texas history. Adams says it’s about time.

“The story of Juneteenth has been there ever since the time General Granger and these soldiers occupied Galveston,” Adams says, noting that a historical marker was installed at the site in 2014. “But it took the work of art to put a face on this story, an identity that now creates whole new conversations, a whole new curiosity around what happened on that date.

For Adams, 48, the mural is a highlight of his nearly thirty-year career as a public artist focusing on black culture and history in Texas. His bold and vibrant mosaics, sculptures and murals can be found throughout Houston, from Elements of change, a series of four glass and ceramic mosaics honoring the founders of Emancipation Park, in I can not breathe, a captivating close-up portrait of George Floyd painted outside the Breakfast Klub restaurant in Floyd’s old quarter, the Third Ward. Adams has also made art in schools, community centers, government buildings, health clinics, and dozens of other public places around Houston and the state. He is drawn to public art in part because he is an extrovert who enjoys collaborating with community members and civic leaders. Most importantly, he admires how a mural on a restaurant or a sculpture in a park can make art accessible.

“Most of the kids in our downtown don’t visit traditional art spaces. They don’t go to the Museum of Fine Arts. They will not go to the Museum of Contemporary Art, ”he said. “I saw public art as a clear, easy and accessible way to bring art to [those] who might never have access otherwise.

His path to becoming a professional artist was unconventional. Adams, who was born in Cheyenne, Wyoming, in 1972, moved around a lot as a child due to his father’s work as a soil scientist for the US Department of Agriculture. To cope with being the new kid on the block, he used art as a way to bond with his classmates. The adults around him weren’t always supportive, however: he recalls a painful moment in kindergarten, when his teacher humiliated him after he didn’t follow the instructions for an activity intended for teach colors and shapes.

“I remember she grabbed my paper. [She] pick it up, lift it over his head and draw the class attention to my work, ”he says. “Then she starts to tear my paper in half.” Then she takes my pencils and crushes them into a thousand small pieces.

The timing was pivotal for Adams, causing him to steer clear of art classes as a child. But he also says it didn’t deter him, instead it solidified his identity as an artist.

“I knew then, even at the age of five, that it was me and that I am not what you just did,” he says.

He continued to draw on his bedroom walls, mostly characters from his beloved comics. In 1992, to his father’s anger, Adams dropped out of Texas A&M University after his freshman year. He had obtained a full scholarship and was planning to study accounting, but his heart was not there; he was ready to pursue art full time. He moved with his mother to Houston and immersed himself in the city’s burgeoning arts community. Adams began to network and meet leaders in the field, including Michelle Barnes, co-founder of the Community Artists’ Collective, and Rick Lowe, founder of Project Row Houses, the nationally recognized program that combines affordable housing with art and cutting edge design.

Barnes helped Adams land some of his first jobs, teaching art classes at the Shape Community Center and the Community Artists’ Collective. He paid the bills juggling a range of art-related jobs: painting signs and teaching in after-school programs, among many other concerts. Barnes says Adams’s creative flexibility has served him well.

“He’s not trying to make something that worked in one project work in another. But he learned and grew from those previous experiences, and each new project presents a new challenge, ”she says. “There is no formula. He’s just up to the challenge.

Adams was 21 when he undertook his first major public art project. El Franco Lee, former Harris County Commissioner, commissioned him and a team of artists (with help from Barnes) to design a memorial park for Congressman Mickey Leland, who tragically died in an accident plane to Ethiopia in 1989.

Each commission led to the next. In 2019, Adams was the lead artist for the $ 33 million renovation of Emancipation Park, the city’s first public park and a popular gathering place for the Juneteenth celebrations. He helped design four mosaic monuments honoring the founders of the park. With over 800,000 colored glass tiles depicting earth, wind, water and fire, the statues position the four men who created the park – community leaders and former slaves John Henry “Jack” Yates, Richard Allen, Richard Brock and Elias Dibble – as a vital part of Houston history.

About a year ago, Adams began to use the title “the creatives” to refer to the collective of artists with which he associates. He often collaborates with artists from various backgrounds; the team on the Galveston mural included an artist from Nigeria, Sam Abimbola Adenugba, as well as three Houstonians.

Last summer, as the pandemic raged and the death of George Floyd flooded media coverage, the Creatives painted a mural in his memory at the Breakfast Klub, a beloved restaurant in Third Ward, the old quarter. by Floyd. The work was cathartic.

“It was therapy, because I’m angry, I’m frustrated, I’m confused. Like, how do we let this happen? Adams said.

After Floyd’s death, as the Black Lives Matter protests rolled out across the country, the Juneteenth celebrations also garnered more attention. Black Texans have always celebrated June 19, of course, but now 49 states and the District of Columbia officially recognize the holiday. Samuel Collins III, a historian from Galveston who sits on the board of directors of the National Trust for Historic Preservation, thought it was time to create a larger conversation around Juneteenth in the town where the statement was issued.

“I believe all of these events were unfortunately like a constant drop on a rock, and that rock opened up,” Collins said. “Now there is a window of opportunity to be more proactive in the job.”

In 2012, Collins raised funds for a historic marker at the site of the former Osterman Building, where General Gordon Granger read aloud General Order # 3. The marker was erected in 2014, but Collins was disappointed that few passers-by seemed to notice it on its way to the restaurants and bars in Galveston Town Center Square. A mural would attract more attention, he decided. He quickly obtained permission from the building’s owner, Mitchell Historic Properties.

A young Houston-raised artist, Chayse Sampy, drew the first sketch of the mural, and Adams eventually got involved to help. Adams’ design has been submitted to the Galveston Landmark Commission for approval. In March, artists began work on the mural, which shows key figures from Juneteenth and the racial justice movement: Abraham Lincoln, Harriet Tubman, General Gordon Granger, and the United States Colored Troops. Visitors who download the free Uncover Everything app can scan the mural with their phone to view videos and learn more about Juneteenth’s story.

The mural features five round portals (circles are a recurring motif in Adams’ work). The first represents Esteban, or Estevanico, who would be the first African slave to come to North America. He was shipwrecked on the Texas coast with the Spanish Narváez Expedition of 1528, and later led other expeditions to Spain. He is followed on the mural by abolitionist Harriet Tubman, one hand gesturing for the fleeing slaves to follow her on the Underground Railroad, and the other grabbing a lantern. In the next section of the mural, Abraham Lincoln, who issued the Emancipation Proclamation in 1863, stands stoically, grabbing a chain with open handcuffs. We also see General Gordon Granger signing General Order 3 (the text of which is included in its entirety at the bottom of the mural) under the solemn gaze of the United States colored troops. The mural features an astronaut, symbolizing continued exploration. Finally, there is a group of people who are walking forward, walking towards the idea of ​​”absolute equality”.

Adams is finalizing a documentary on Juneteenth and the production of the mural. He and his team also design six murals for the Edison Arts Foundation, create a series of sculptures for a new community park in Houston, and design artwork and graphics for two floors of a new hospital in San Antonio. But he says he is particularly proud of the Juneteenth fresco.

“Part of the journey that our ancestors died for was for us, you and me, to be able to do what we do, so that what they did was not in vain,” he says. “It should become a trend. It must. Everyone and their mom should know what Juneteenth is talking about. ”