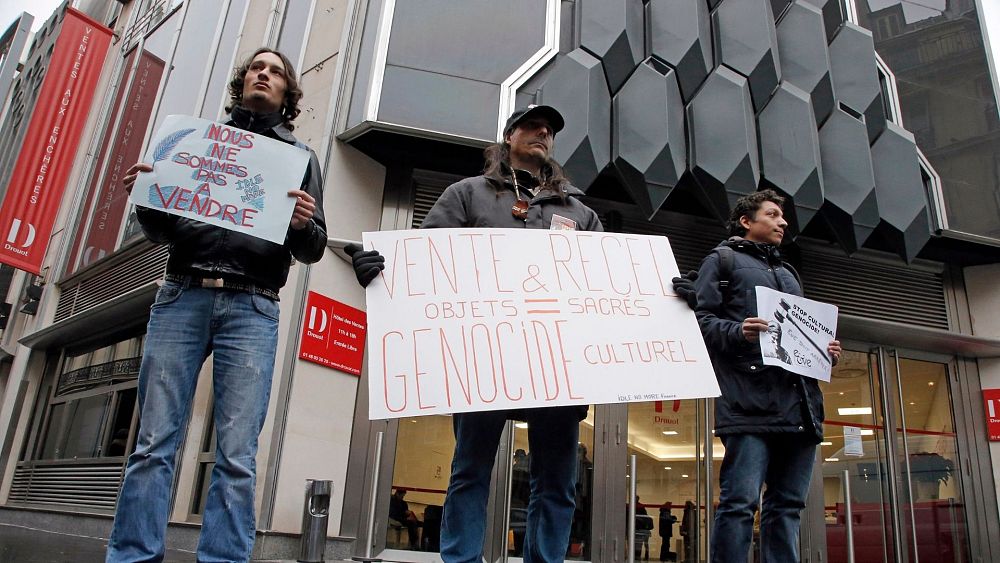 The Mexican president has called on French auction houses to stop the sale of pre-Hispanic objects.

President Andrés Manuel López Obrador says the country went so far as to send Mexico archaeological instituting photos of relics, asking if they were genuine, so they could sell them for more money.

It comes as Parisian auction houses Société Baecque et Associés and Société Binoche et Giquello prepare for auctions of indigenous pieces from around the world this month.

The Mexican president gave orders to the government National Institute of Anthropology and Historyknown by its Spanish initials as INAH, to stop responding to such requests.

“They, the organizations that auction these coins, are so brazen that they request information from INAH, they send photos, so that INAH can tell them if they are genuine or fake,” he explains. -he.

The President also considered the French governmentwhich has done nothing to stop a series of such auctions in recent years.

López Obrador says the French should follow the example of the Italian government, which has been keen to identify and return ancient artifacts.

“We are going to go up to the international level. We managed to recover a lot of parts and it is very important”, assures the president.

López Obrador said First Lady Beatriz Gutiérrez Müller had written to the French foreign minister asking for the two upcoming sales of around 50 Mexican objects to be halted.

They say many of the pieces in these sales are counterfeits and ask potential buyers “not to act like criminals”.

The president and first lady have mounted a campaign to get artifacts from Mayan, Aztec and other pre-Hispanic cultures back, and the president said 6,000 relics have been returned to Mexico so far.

But despite sending letters and diplomatic requests, Mexico says it has had little success in convincing the French to crack down on the lucrative trade.

The most recent occurred in November when the Paris branch of Christie’s auctioned off 72 sculptures and figurines from the Maya and Olmec cultures despite Mexico’s claim that the pieces were national treasures and part of its national heritage. Fifteen other items failed to sell.

A Mayan stone carving, traditionally known as an ‘axe’ because of its shape, cost nearly €700,000.

Christie’s catalog describes the piece as a “sculpturally sculpted bearded dignitary with his head dramatically thrown back and wrestling with a mythical, meandering rattlesnake”.

Previously, Mexico had failed to stop several auctions, including a sale of pre-Hispanic sculptures and other artifacts by Christie’s Paris earlier last year.

Mexican archaeologist Leonardo López Luján, who oversaw the excavations of Mexico City’s Templo Mayor, wrote on his Twitter account at the time that “it’s a never-ending story”.

“The old recurrent method of sending letters and requests has been proven to have no effect other than to pretend that something is being done,” he said.

Parisian auction houses are often known for selling indigenous objects that are already on the art market.

Protests from activists who say they should be returned to their native lands are still to discourage them.

Their defenses are primarily rooted in legislation. Christie’s says the Mayan sculpture, for example, was purchased by a European collector from the United States around 1970 – before the law that protects important cultural artifacts was two years old.

López Obrador also criticized Austria for refusing to return a headdress that once belonged to one of the last Aztec emperors, saying Austria’s attitude was “selfish” and “anti-cultural”.

The large semi-circle of green feathers of the Quetzal bird and other species are over three feet wide.

Held in the Museum of Ethnology in Vienna, López Obrador said the Austrians had argued that he was too fragile to be moved.

Montezuma, the Aztec emperor, gifted the feathered headdress to the Spanish conqueror Hernan Cortes in 1519. But Mexican officials admit that Montezuma probably never wore it personally.