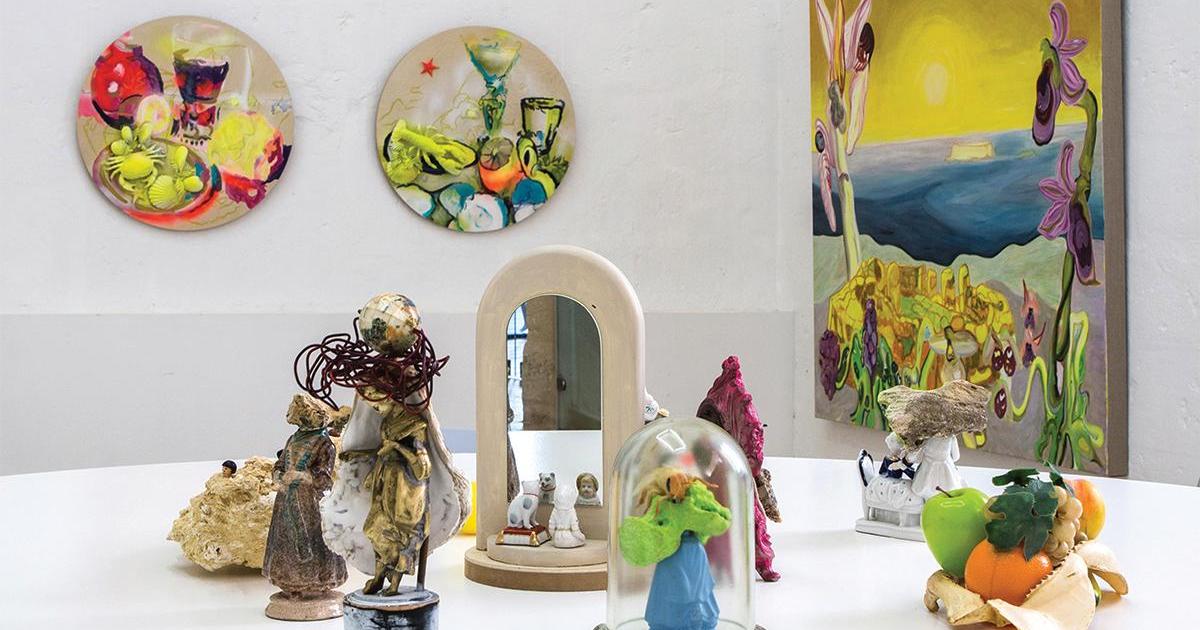 Nature without humans, humans without nature

“La Luz no absuelve ni condena, no es justa ni es injusta” – the light neither absolves nor condemns, neither just nor unjust, says the Mexican writer, Nobel laureate and diplomat Octavio Paz to himself. The title of the exhibition by artist Antje Liemann Light Is Time Thinking About Itself is taken from the same poem by Paz.

Antje’s post-anthropocene landscapes and objects-finds imagine a world no longer inhabited by humans or morals, where nature has taken over.

Kitsch porcelain statues, plastic fruit, an eighteenth century inkwell and clock, all the finds from the flea market representing the “rubbish of a bourgeois life”, have been petrified and returned to the natural setting they have attempted to restore. ‘imitate.

“In Western culture, every living room features some kind of ornament inspired by nature. The mass-produced porcelain figurines of bucolic shepherdesses, dolphins and eagles are attempts to bring nature into the house, bought for status, to “complete” the idea of ​​a house but ultimately rejected, sold or throws. The paradox is that, simultaneously, these houses with their plastic-covered sofas are obsessed with keeping dust, dirt and nature out, ”recalls Margerita Pulé, curator of the exhibition.

“Once everyday objects find their way into a museum, they take on a meaning of their own. “

A plastic lobster is found sprayed on a disc hanging on the wall, one of the two “memento mori” in acrylic and mixed media, a kind of vanity where symbolic objects recall mortality.

“Nothing is here forever. Each piece has a meaning. The candle will burn; the fish will decompose, ”Liemann almost whispers.

Questions sparked by the March 2020 COVID-19 containment provided the artist with a springboard for the imaginary scenarios she created in the exhibition.

“I had already been selected to exhibit in MUŻA’s community space and originally had another idea for the exhibit. But then, as I watched how wild animals approached previously no-go areas and the effects of the lockdown on nature, I felt I had to do something about it, to reflect how the world had changed. so suddenly from one day to the next, how our lives had changed too, ”explains Liemann, her placid smile radiating from a child and her gentle manner contrasting but complementing a contained solidity that she projects.

It’s ironic that a year later, another COVID lockdown forced the early closure of the exhibit, which opened in March 2021, and postponed until August.

Nothing is here forever. Each piece has a meaning. The candle will burn; the fish will decompose

Man-made materials now outweigh terrestrial biomass, ice is receding, permafrost is melting, and water levels are rising. However, the egocentricity of an apocalyptic or dystopian view by default of human and economic activity to “extract, produce, consume and dispose” assumes that by fading away, humanity will do the same with the natural world.

Rather, the reverse is depicted in Liemann’s egg tempera and fungal rock linseed oil landscape topped by a giant neon yellow apiary.

“The etymology of Malta is linked to bees. If humans can build these crazy tall buildings, why not create an alternative Sliema made up of giant beehives? Perhaps we can reflect the violence of our impact on the environment, ”she reflects.

“What are you doing,” anxiously asks a puzzled security guard of Letta Shtohryn, who has placed a contact microphone against one of the huge megaliths in the temples of Mnajdra.

“We are recording what the temples say,” Shtohryn calmly replies.

“I have worked here for 20 years and no stone has ever spoken to me,” replied the puzzled guard.

Shtohryn’s sound piece, specially commissioned for the exhibition, accompanies Liemann’s large canvas of Neolithic temples entirely taken up by endemic colossal orchids that were once extinct. Shtohryn, who describes herself as “endlessly inspired by deception” in search of “the origins of the real and the artifice,” digitized the vibrations emanating from the temples, the rumblings of nature and the chirping of birds in Maqluba ( limits of Qrendi) and other places. The recordings were juxtaposed against the background of a compilation of dinosaur sounds imagined to recreate a soundscape of nature without human intervention.

“Do you think humanity is going to disappear? What do you think will happen if they go missing? Are we too late to reverse a collective apocalypse or is nature adapting as we evolve? Liemann poses these and other questions to a motley team of cultural and social activists, environmentalists, an economist, a neuroscience-based life coach and an ornithologist, whose answers are recorded in an installation which serves as an extension of the existential debate aroused by the exhibitions. .

Perhaps, as Pulé proposes, “by recognizing our colonization and the capitalization of all the earth’s resources”, the opportunity presents itself “to rethink our relationship with the natural world”.

Ornithologist and environmentalist Marie Claire Gatt, one of Liemann’s interviewees, agrees. Our future here on planet Earth is “very closely tied to the decisions we make today, to keep the world habitable tomorrow”.

What is needed, she says, is “a strong paradigm shift in our values.”

Light is Time Thinking About Itself takes place at MUŻA, Malta’s national museum of community art, until September 5. The exhibition is open every day except Tuesday from 10 a.m. to 4:30 p.m.

Independent journalism costs money. Support Times of Malta for the price of a coffee.