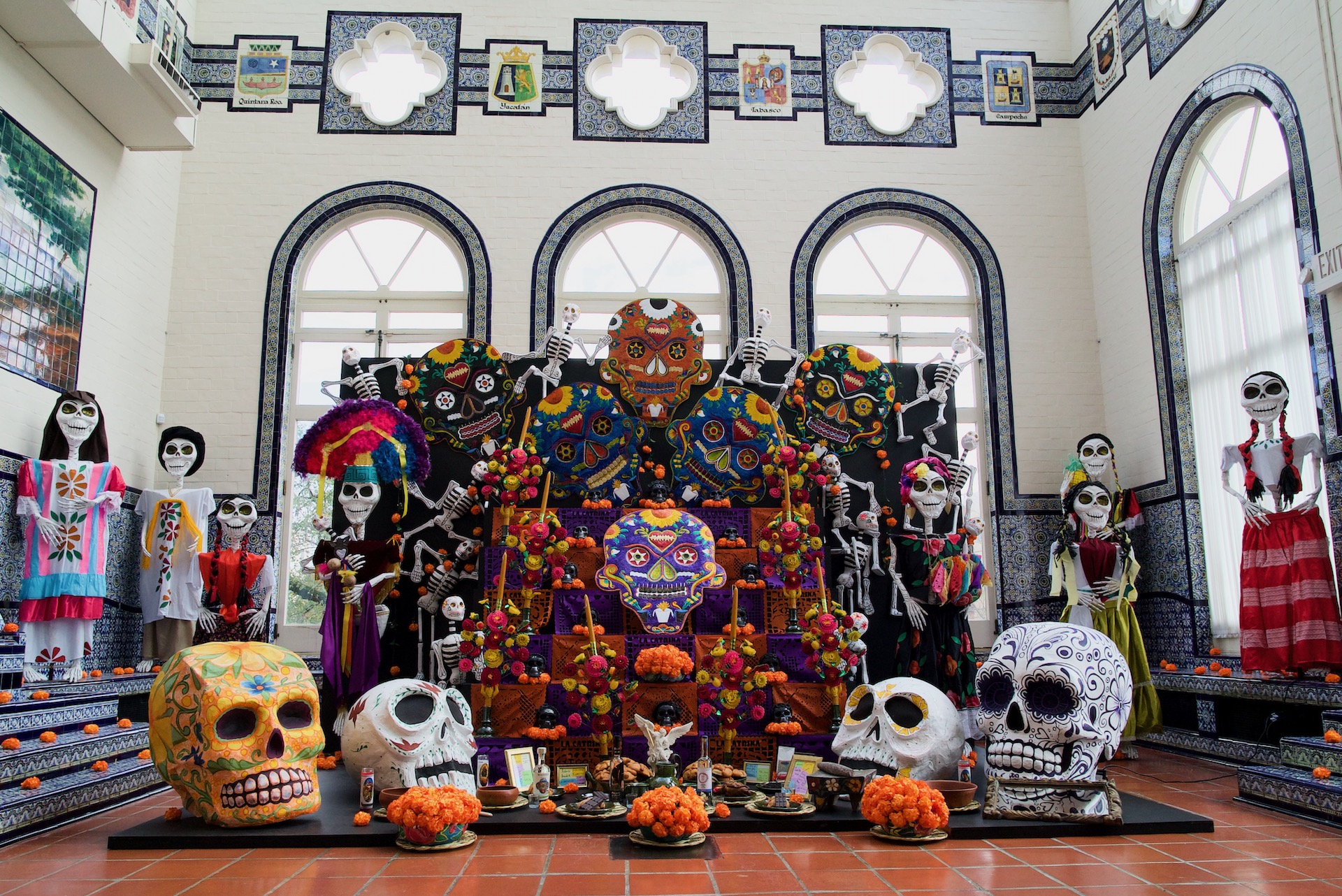 Oaxaca in the United States opens with pomp and irony

Stepping into the Mexican Cultural Institute at 2829 16th St. NW is like stepping into another era far outside of DC Built in 1911, the mansion is decorated with traditional 1930s murals and ceramics. here, it also houses Oaxaca, Lo Tiene Todo (Oaxaca, it has everything), an exhibition of Oaxacan art and culture as part of the novel Oaxaca in the United States festivities. The month-long celebration designed by the government of Oaxaca showcases the state’s cultural heritage.

Contemporary artists from Oaxaca Amador Montes, Sabino guisu, and Bayrol Jimenez are featured in the exhibition, along with a range of folk art titled â€œHecho en Oaxacaâ€ (â€œMade in Oaxacaâ€). The Montes and Guisu galleries are on the first floor; the JimÃ©nez and Hecho galleries in Oaxaca on the third floor. The exhibition, as it coincides with the festivities of DÃ­a de los Muertos celebrated in Oaxaca, as in other states of central and southern Mexico, includes an ofrenda or traditional altar, located in the solarium on the second floor.

Organized by the government of Oaxaca, the exhibition is a response to the dizzying drop in tourism due to the pandemic: since March 2020, spending by international tourists has fallen by more than half, according to the National Institute of Statistics and geography (INEGI). ” The month of Oaxaca in the United States is to understand at a deeper level Mexico and Oaxaca, so that we can come up with new proposals for mutually beneficial relations â€, Ambassador of Mexico to the United States Esteban Moctezuma said at the opening ceremony of the exhibition

The exhibition is the Institute’s third since it reopened to visitors in July 2021. It follows Catharsis, which featured works from the Institute’s permanent Kimberly collection, and another exploring the history of the house, which was purchased by the Mexican government in 1921 and served as an embassy until 1989. It is from the headquarters of the Institute, which serves as the cultural attachÃ© of the Embassy and, in addition to art exhibitions, hosts lectures and workshops on Mexican history and culture.

By DC standards, the house is not very old, but it is singularly preserved. The Mexican government made some changes, including the addition of a porte-cochere and the three-story mural by Roberto Cueva del Rio. It also presents the redesign of the solarium of Cueva del RÃ­o and another mural by Rafael Yela Gunther from 1925 (which was then covered in 1946 for unknown reasons).

In the tradition of Mexican Muralism, Cueva del RÃ­o’s work portrays historical moments and celebrates the diversity of Mexican society (although it offers little of the social criticism found in the work of his contemporaries such as Diego rivera). A self-portrait of the artist seated in a tree is on the first floor. The solarium features traditional Talavera ceramics from the native state of Cueva del RÃ­o, Puebla, with representations of the twin volcanoes and the coats of arms of all the states of Mexico except Baja California Sur, which does had not yet been established when the space was redesigned. in 1933.

For the rest, the house is original, from the furniture and tapestries in the library on the third floor to those in the Fontainebleau-inspired living room on the second floor. It also houses a rare Aeolian organ whose pipes run from the basement to the fourth floor. “We are very proud of the house”, general manager Ix-Nic Iruegas recount City paper. “We know you can’t even understand what’s on the inside here from the outside.”

Among the three artists highlighted in Oaxaca, Lo Tiene Todo, Montes is the most established and calls the abstract works presented â€œPortraitsâ€. The mixed media painter mixes oil painting, printmaking, photo collage and text to evoke his subjects. “[The work] has to do with what is forgotten, with those who are deceased, â€says Montes. “It’s an experience to see the dead from a different perspective.” Although the theme honors DÃ­a de los Muertos, the work is monochrome in relation to the folk art of the floor.

Montes’ work follows the tradition of Mexican painters of the escaped generation such as Rufino Tamayo and Francisco Toledo, both from Oaxaca. In form, he has little in common with Tamayo, but they share a similar tone; the melancholy of memory and nostalgia captured by Tamayo is also found in Montes’ art.

Guisu and JimÃ©nez were chosen to represent the next generation of artists from Oaxaca – their work breaks with the expressionist tradition from which Montes came. A multidisciplinary artist known for his neon installations, Guisu creates works that include sculptures and paintings with the same vibrant electric color of his installations.

JimÃ©nez’s work includes paintings and ceramics made in collaboration with a painter colleague and multidisciplinary artist from Oaxaca. Rolando Martinez. JimÃ©nez calls the paintings – brightly colored abstract works like Guisu’s – â€œpop artâ€. Unlike Montes’ pieces, his ceramics are clearly inspired by Oaxacan festivals and are overtly political. His “Serie ‘El reposo de la mÃ¡scara'” is a series of papier-mÃ¢chÃ© masks made in the calenda or carnival style and painted with ceramic paint. Like the masks actually worn at such festivities, they have an almost surreal quality, albeit with the vibrant coloring reminiscent of JimÃ©nez’s painting, and they are meant to evoke the same function that JimÃ©nez explains: â€œWhen you wear a mask, you are always playing the part of something else.

â€œYou are not representing yourself, but something else so that this spirit can make peace with you,â€ JimÃ©nez adds. The diablito (or little devil) mask, for example, could traditionally represent a Spanish settler, according to JimÃ©nez; however, in the artist’s work, global capitalism is the new conquistador. On each mask there is a discreet logo of mega-corporations such as Google.

The Hecho Galleries in Oaxaca present clothing, ceramics, photographs of Oaxacan carnivals and Waldo hernandez‘s alebrijes (handmade figurines) of imagined animals. The term â€œHecho en Oaxacaâ€ refers to the work’s protected designation of origin, which is available for purchase. The status of protected designation of origin guarantees that a product cannot be reproduced outside its area of â€‹â€‹origin or at least is not legally recognized as such (which is why all Blue Weber Agave spirits produced in outside of Jalisco and parts of Nayarit, Guanajuato, MichoacÃ¡n, and Tamaulipas cannot be called tequila). In addition to stimulating tourism, the government of Oaxaca is trying to secure the heritage that a designation of origin can bring. Similar art objects are available in the store on the first floor.

The ofrenda was designed by the artist from Oaxaca Carlos guzman with the contribution of the director of artistic affairs of the Institute Enrique Quiroz. GuzmÃ¡n’s design features traditional components, including Calaveras Catrinas (Oaxacan skulls), cartolerÃ­a, papier-mÃ¢chÃ© puppets, papel picado (decorative perforated paper), and marigolds.

The tradition of the altar refers to pre-Columbian conceptions of death, in which forgetting is the most absolute death one can suffer. It is a space to remember the dead and a place where mourners can invite the deceased to return, hence Quiroz’s contributions in mezcal, pan dulce and chocolate. He also added elements traditionally used to protect the space, including salt, indigenous copal incense and a sacred or religious figure, in this case Saint Michael.

The altar also incorporates elements of the Catharsis exhibition, which was dedicated to those who died from COVID-19 and offered visitors the option to leave notes for their dead. Quiroz reused these notes here, where they are now on display. “If this culture or tradition [is] will help you mourn and remember your family members, and if Mexico can bring this to the world, as it has given so much, take it by all means, â€he explains.

Quiroz notes that the tradition of the altar is not very widespread in Mexico, but that it has become better known in the United States as a result of performances in the James bond movie Spectrum and disney Coco. According to Moctezuma, 1.5 million people born in Oaxaca currently live in the United States. Among Mexican states, Oaxaca has the second highest percentage of immigrants to the United States, according to INEGI. This migration was precipitated by a lack of economic opportunities for the residents of Oaxaca. At the opposite end of this spectrum are the tourism rich states of Quintana Roo and YucatÃ¡n.

The tourism industry and Oaxacan export earnings like mezcal provide a clear path for growth, hence the Governor Alejandro Murat HinojosaThe slogan of “Oaxaca wants more of the world in Oaxaca and more of Oaxaca in the world.” Tourism had grown steadily in the state before the pandemic hit. In 2019, the state topped the national tourism average by breaking its own records, but COVID hit the industry hard. Oaxacan hotel occupancy rates fell from 60% to 10% during the Independence Day holidays last year.

â€œOaxaca needs allies like you,â€ said Montes. “Bringing a little of what Oaxaca is like to the world at such times, as an artist, as a human being, is vital.”

But ambivalence as to the impact of external influences persists. After the petrified waterfall of Hierve el Agua in Oaxaca closed due to the pandemic, local residents decided to ban tourists from visiting it, citing the exploitation of locals by travel agencies and the degradation of the site in due to the number of visitors. The site was recently reopened for its job creation potential.

This ambivalence is present in the exhibition. JimÃ©nez may not overlap with Toledo in style, but he shares Toledo’s distrust of globalization. In 2002, Toledo prevented the opening of a McDonald’s in downtown Oaxaca. In â€œReposo de la mÃ¡scaraâ€, the first mask is a pig with a noose hanging from its mouth. Above its muzzle is the key gold logo of Coppel, a department store with locations all over Mexico known for providing easy credit to its customers. “Then they got you, [theyâ€™re] like the executioner of the Mexicans, â€says JimÃ©nez. â€œThis is the new kind of colonialism.

The exhibition and the Institute are open to the public from Monday to Saturday from 10 am to 6 pm on weekdays; from noon to 4 p.m. on Saturday.