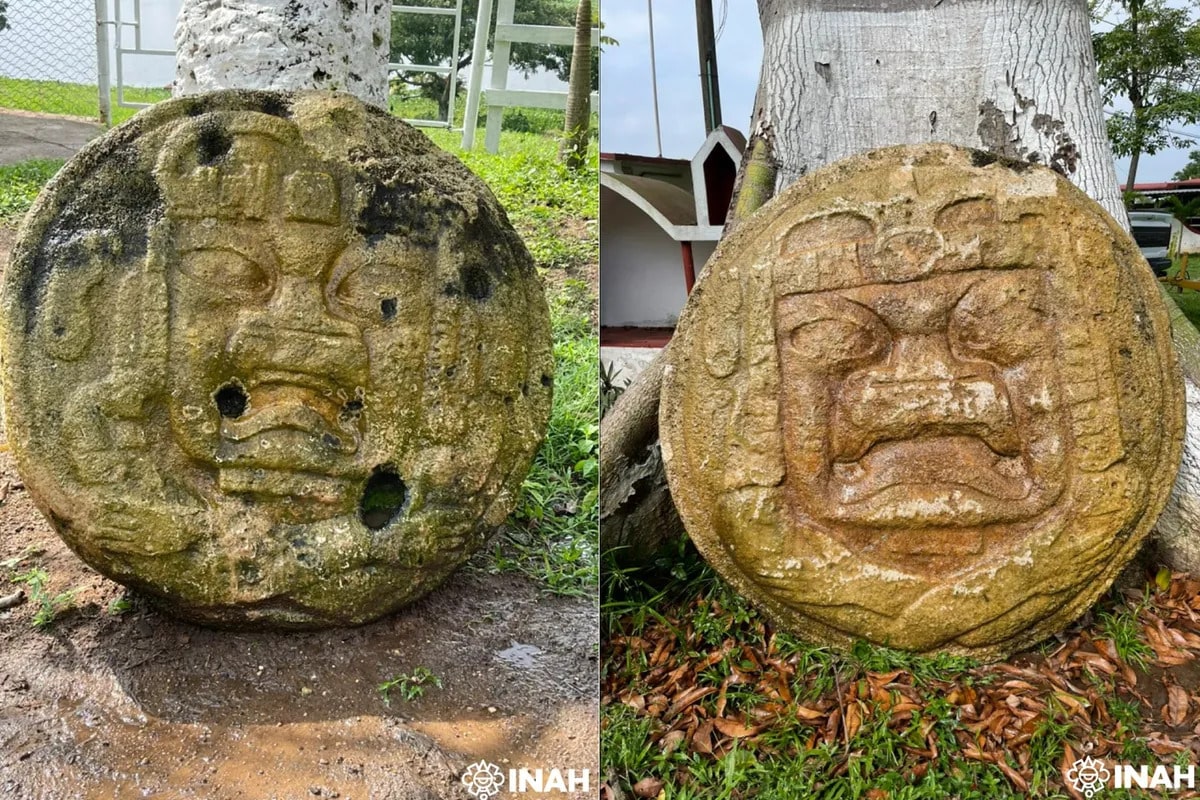 Mexican archaeologists have discovered two sculpted reliefs from the late Olmec period (900-400 BC) at Villahermosa, Tabasco in southeastern Mexico that are believed to depict local rulers performing a ritual contortion.

Carved reliefs of two hard-faced monarchs from the Olmec civilization are thought to show a pair of rulers in a trance-like state, roaring like a jaguar, in the midst of a ‘contortionist’ ritual designed to cause blackouts.

The reliefs are carved from spherical slabs of limestone 4.6 feet in diameter that weigh over 1,500 pounds each. Each relief depicts a man wearing a four ears of corn headdress, his face contorted into a grimace – lips open and lowered, eyes wide. In the middle of the headdress is an “Olmec cross”, a jaguar glyph that served as a status symbol. The faces take up most of the space, with footprints on the sides and crossed arms below.

The jaguar is a prominent figure in many pre-Columbian Mesoamerican societies, with a jaguar deity appearing in nearly every belief system of this period. Some archaeological evidence suggests that the Maya kept jaguars as pets.

Both monuments represent local rulers of the Middle Usumacinta region and date to the late Olmec horizon (900-400 BC).

Other similar monuments from the Middle Usumacinta region suggest that the reliefs depict the rulers during a “contortionist” ritual, during which they were effectively strangled in an otherworldly trance.

The reliefs were found in a private house in Villahermosa. The owner said he found them while leveling farmland on his farm in Tenosique. (A very similar circular relief was found at Tenosique in 2000.) Archaeologists plan to survey the find site in hopes of narrowing the date of the carvings.

“The five monuments have in common the representation of large faces, perhaps of local rulers, who also practiced contortion, not in a playful, but in a ritual sense. By adopting the position in which they appear represented – which reduces the irrigation and oxygenation of the blood to the brain – the characters have reached states of trance in the divinatory ceremonies and this has given them powers”, Tomás Pérez Suárez, archaeologist at INAH, explained in a press release.

This style of relief is typical of the late Olmec civilization before the “Mayanization” process that struck the culture around 500-300 BCE.

However, it seems that the legacy of the Olmec civilization has survived. INAH archaeologists speculate that the style seen in this duo of reliefs may have evolved into the Classic Maya “jaw” inscriptions, which depict rulers with similarly gaping mouths.

“It is possible that these faces evolved and drifted into Maya ajaw altars, such as those at the site of Caracol, Belize, which tells us about the permanence of this theme for more than three centuries, already for the Early Classic and the Classic late. periods. (495 to 790 AD). The word ajaw means “one who shouts”, “one who commands”, “one who orders”; and in these Mayan monuments stands out the mouth, a characteristic that must come from the Olmec era, in particular from these circular reliefs of ‘contortionists’ which are portraits of local chieftains”, added Pérez Suárez.

Whet your appetite for destruction at Tampa’s Smash Room