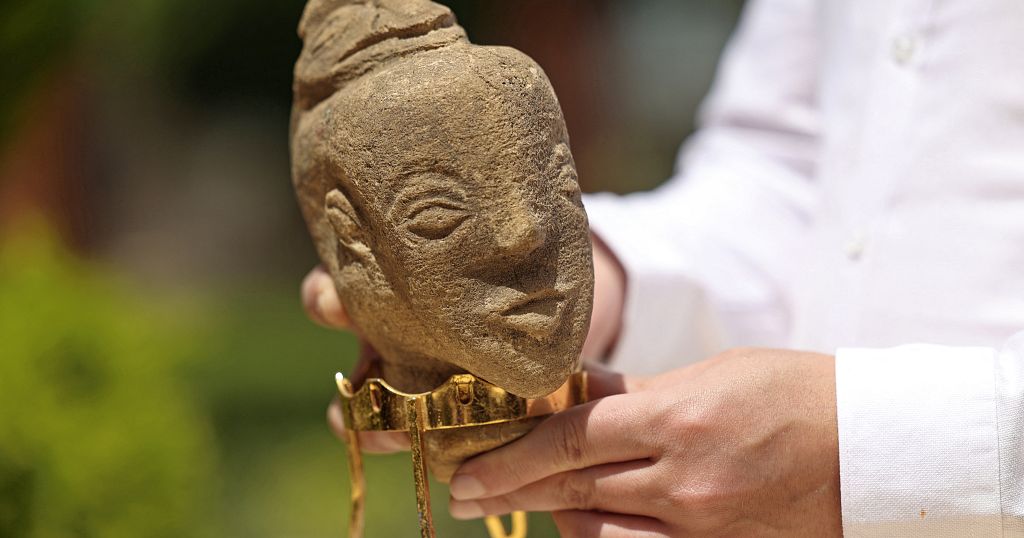 The Palestinian authorities in Gaza have announced the discovery of a 4,500-year-old statuette.

The limestone artifact was found by a farmer and turned over to authorities.

It measures 22 cm and represents the face of an ancient goddess.

“Today we are announcing an archaeological discovery at the site of Sheikh Hamouda in Khan Yunis, which is a symbol of the oldest human civilization that lived in Gaza City, where a Palestinian farmer from eastern Khan Yunis found the head of a statue while he was working his land and handing it over to the authorities,” said Jamal Abu Rida, director of the General Administration of Antiquities at the Ministry of Tourism and Antiquities in Gaza.

According to the ministry official, the statuette depicts the Canaanite goddess Anat, the goddess of love and war.

Tourism and access to archaeological sites are restricted in Gaza due to an Israeli blockade imposed since the militant group Hamas took control of the enclave in 2007.

“The specialized technical staff of the Ministry of Tourism and Antiquities examined the statue, which is displayed before you, and it turned out that it belonged to the Canaanite goddess Anat, who was the goddess of love, beauty and war, according to Canaanite mythology, and the statue is around 4,500 years old,” Jamal Abu Rida informed.

Nariman Khaleh, an employee at the Ministry of Tourism added “the statue is in the possession of Tourism and Antiquities, and it will be exhibited at the National Museum, Pasha Palace Museum in the coming days.”

In February, workers at a construction site in northern Gaza discovered 31 Roman-era tombs dating back to the first century CE.

Last January, Hamas reopened the remains of a 5th-century Byzantine church after a years-long restoration effort supported by foreign donors.