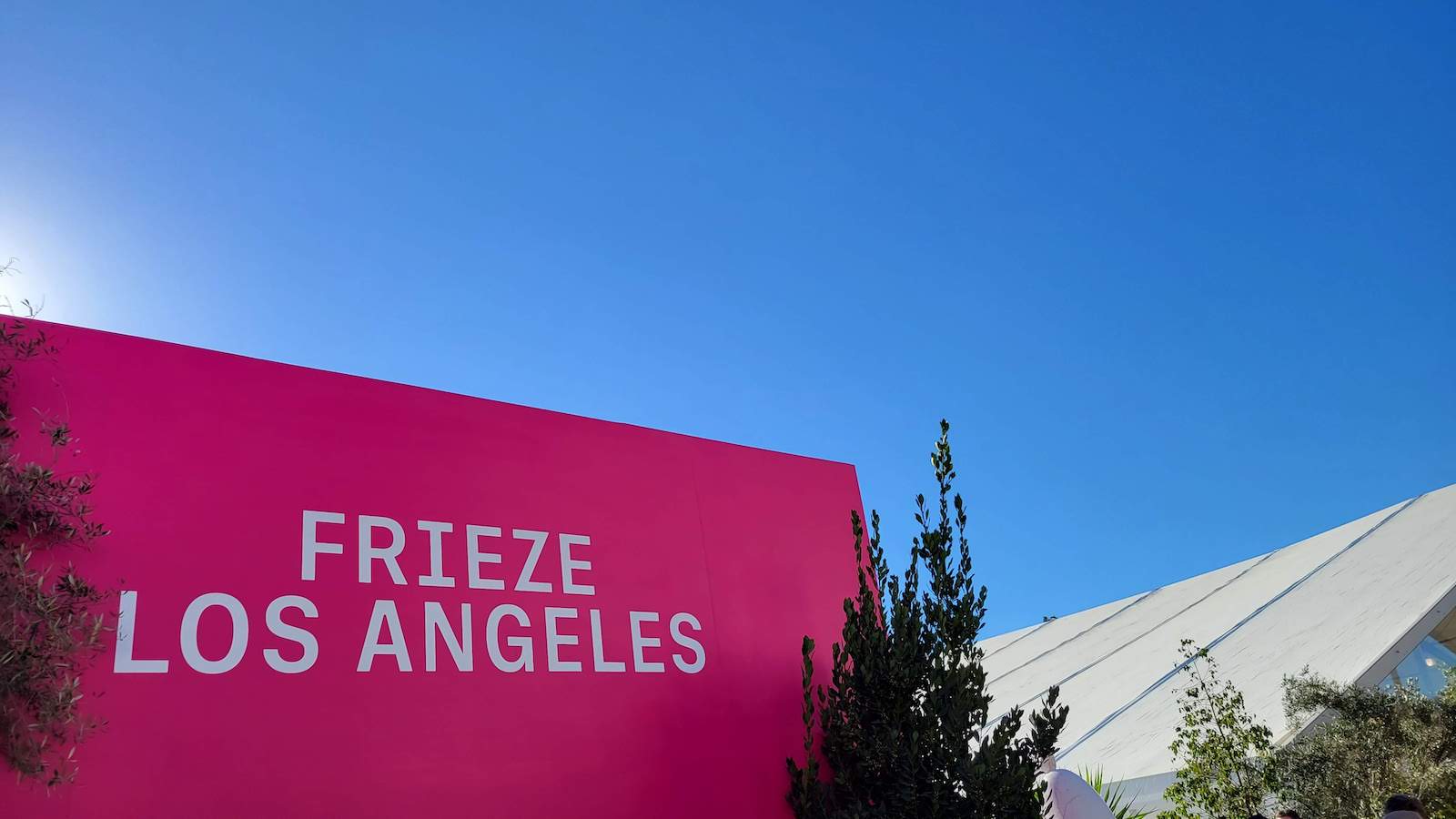 Return to Los Angeles with me, where I spent a long weekend immersed in art, visiting art fairs and galleries for Frieze Week. While Frieze may have been the main event attracting out-of-town visitors, the concurrent Felix and Spring/Break fairs, each with their own distinct vibe, and numerous exhibition openings across the city, have made Frieze Week unique, memorable and fun. Here are some of the exhibits and artists that still resonate after returning home.

The energy and excitement was palpable at Frieze, bustling as always with its return to the first in-person fair since 2020. Held February 17-20, the fair moved away from Hollywood and opted for a marquee custom designed fair in Beverly Hills. This allowed for more participating galleries, an increase from 70 to 100. Notable installations included Los Angeles-based Glenn Kaino. Revolutions (2022), presented by Pace, a monumental sculpture made of circular metal bars. The work was inspired by the connection between global protests around the world. As an instrument, the bars play the melody of U2 bloody sunday sunday when hit in sequence. Gagosian presented a unique work for its stand, The madness of the dreamer (2010) by Chris Burden. The architectural structure, made up of three 19th century cast iron gazebos joined together, is reminiscent of those found in English gardens. Painted in pale peach and decorated with delicate lace between the columns, walking through the facility feels like stepping into a fairy tale.

Frieze was also an opportunity to discover new artists through the Focus LA section, dedicated to 11 young local galleries. The works were tactile and connected art and craft, tradition and technology. At Garden, the fascinating work of Sarah Rosalena has linked the history of computing, the aerospace industry in Southern California, and Indigenous craft practices. There were beeswax gourds with intricate beads applied to them, depicting NASA imagery, tapestries that mirrored pixel data encoding, and smoky stoneware ceramics, made by a custom 3D printer. In Lieu featured these intricate felted wool wall hangings by Pauline Shaw that were inspired by MRI scans taken as she reminisced about living in Hong Kong as a child. Other pieces were inspired by tapestries seen at the Met and incorporated mouth-blown glass and copperware. Marta combined furniture and sculpture, with new work by New York-based Minjae Kim and local Los Angeles practice A History of Frogs. Stars featured a striking installation by artist Diné Eric-Paul Riege, a pair of large plush sculptures that resembled pearl necklaces and a third hanging sculpture that resembled a loom.

Spring/Break is the artists’ art fair. Founded in New York in 2012 by artists Ambre Kelly and Andrew Gori, Spring/Break held its third edition in Los Angeles from February 16-20. Memorable booths included: Alia Shawkat and Maria Paz’s Desert Angels booth hosted by Kelly and Gori, which felt like entering an artist’s studio. Ceramic artist Paz was working there on a piece of clay and Shawkat’s paintings were nailed to the wall, as if they had just been finished. Boston-based Abigail Ovilgy Gallery featured works by Allison Baker and Katrina Sánchez. Sánchez’s Welcome Passage installation served as the entrance to the playful booth, while Baker’s soft sculptures of giant objects, like glittery soft cigarettes, a metallic soda can and a matchbook, sagged against the walls of the stand. We’ll all be fine, hosted by Zahra Sherzad, was an eye-catching booth featuring works by MCXT (Monica Canilao and Xara Thustra). The show’s new location at Skylight Culver City, a 30,000 square foot warehouse, felt more spacious, brighter and much more conducive to viewing art than in previous years. The works of participating artists are well documented on the exhibition website.

You can’t get more Los Angeles than hanging around the poolside cabanas, surrounded by palm trees at the Roosevelt Hotel. Again taking over the suites and cabanas on the 11th and 12th floors of the hotel, Felix brought together 60 galleries from the United States and Europe. Stands that stood out to me included the Volume Gallery in Chicago, where their room was occupied by three large hanging knotted textile sculptures by Tanya Aguiñiga. A wall piece, Corazón Fronterizo, was made of cotton rope, terracotta, and a fragment of a US-Mexico border fence. In the next room, Sam Stewart’s Da Capo, a series of floor lamps with bonnets as shades, stood eerily around each other. Nonaka-Hill, whose gallery is located in a local mall, has embraced the hotel room, using the bed as a garden for sculptures of paper flowers – called edenworks — of Megumi Shinozaki and puppy figurines.

In the Sycamore district, we stopped at Deitch for the opening of Luncheon on the Grassan exhibition of more than 30 artists responding to the seminal work of Édouard Manet, Lunch on the Grass (1863). Highlights included an impressive triptych, Luncheon on the Grass by British painter Cecily Brown and 12 p.m. the 145th, a 3-part work depicting black female figures using denim, textiles, digital printing and paint, by American artist Tschabalala Self. From Deitch it was an easy walk to grab some caffeine at the beautiful and spacious Sightglass Coffee, with great coffee and a well-organized market, or stock up at Tartine Sycamore, for pastries, bread or their famous toast. Both originally from San Francisco, Sightglass moved to LA in 2020, its first location outside of San Francisco since opening a decade ago, while Tartine takes over the LA area with five locations and counting. . The laid-back, modern Israeli Mizlala was the place to go, however, as Deitch’s gallery assistant had recommended, for the best Falafel. An intriguing sculpture at the entrance to Just One Eye caught our eye, and the staff at the door insisted that we enter – “you can see better from inside, you know”. It was John Chamberlain’s Hawkfliesagain, a sculpture made of crushed chrome and scrap steel. Inside the store, alongside designer fashion, jewelry and furniture, was a contemporary art gallery featuring a painting of cherry blossoms by Damian Hirst and a sculpture by Takashi Murakami. Also nearby was the nonprofit LAXART with Karl Holmqvist’s text work on the facade and Josh Kline’s 16mm sci-fi short, Adaptationscreen inside.

While exploring a stretch of West Washington Boulevard in the Arlington Heights neighborhood, we stopped at several galleries. Park View/Paul Soto had a solo show by Los Angeles-based Alex Olson, whose colorful paintings played with the illusion of the surface of each work. In some rooms, blocks of color contrasted with bands of paint, applied thickly with modeling clay and streaked across the surface. In others, wallpaper or textile patterns were designed to look like they peeled away the canvas to reveal another pattern underneath. OCHI featured a solo exhibition by Brian Wills, new works using yarn, paint and wood that change color as you move. More wire artwork was in the back gallery space, which was painted entirely in Yves Klein Blue, a super saturated blue that was made to provoke perception. A few doors down, OCHI Aux hosted the New York gallery Mrs., with an exhibition of new works by British artist Poppy Jones. Title Shade of cut, the works were small and subtle, the result of a complex process involving printing photographs and painting on suede. At the Kristina Kite Gallery, an interesting space with a striking checkerboard floor, lovely large-scale paintings by Tara Walters hang in contrast to checkerboard paintings by Los Angeles-based Canadian artist Hanna Hur. And a short walk away was The Underground Museum, which recently reopened after being closed for the past two years. The Underground Museum is an arts and cultural center that operates four converted display cases. Its mission is to offer neighborhood residents free access to art, culture and well-being. A series of paintings by the late artist and museum co-founder Noah Davis were on display. A stroll through the purple back garden proved to be an urban oasis.

Another remarkable exhibition that combined an interesting space, linking art and design, was Ships, a 10-day exhibition presented by the curatorial platform Sized. Taking place in the studio’s new home, a former furniture store on a street lined with a hodgepodge of discount furniture stores, the exhibition featured works by 200 artists, designers, architects, studios and even a cactus store. Curated by founder and creative director Alexander May, the exhibition was dedicated to the ship as a poetic form. A vast array of pots, vases, bowls, objects and furniture were mostly on display on the floor, covering the venue’s 7,000 square feet. We spotted a ship excavated by Jeff Martin, from Vancouver, of Jeff Martin Joinery/Alpineglow Projects. Other works of interest include the site-specific crater of Fai Khadra, drilled directly into the ground on the second floor, and the figurative sculpture of Vanessa Beecroft, which I discovered later in May, had been cast from the body by Kim Kardashian. The exhibit included a site-specific Ikebana installation by SŌGETSU Los Angeles, with branches from The Lovell House, a house designed by Richard Neutra, and botanical clippings provided by The Huntington Gardens. After this show, they will undergo further renovations of the space, maybe do a show in New York, maybe without as many artists – the options are open. I will definitely follow to see more!

I’m marking my calendar for Frieze LA next year. In the meantime, our exhibitions are flourishing, with a welcome return to openings and a spring program in perspective!

Predicting the winner of the 2022 Oscar-nominated shorts