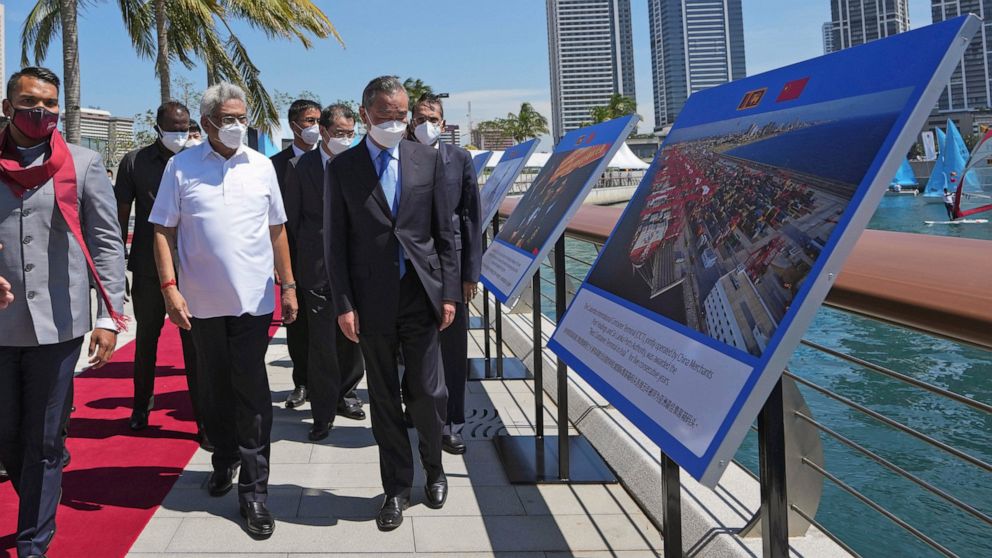 The Sri Lankan government has said China does not want to restructure its loans to the island nation, but is considering making an additional loan to help pay off existing debts

COLOMBO, Sri Lanka — The Sri Lankan government said on Tuesday it was considering getting another loan from Beijing to repay some of its debt to Chinese banks after China told the bankrupt island nation that it was not in favor of restructuring existing loans.

Sri Lanka has nearly $7 billion in foreign debt to repay this year and will have to repay $25 billion over the next five years. A severe shortage of foreign currency means the country lacks money to buy imported goods, leading to shortages of food, fuel and other essentials.

The economic crisis has prompted weeks of protests across the country calling for the resignation of President Gotabaya Rajapaksa.

Government spokesman Nalaka Godahewa said Beijing was reluctant to restructure Sri Lanka’s debt because it did not want to set that precedent. He told reporters that the finance ministry would later announce details of talks with China.

Earlier this month, the government announced it was suspending foreign loan repayments pending negotiations with the International Monetary Fund for a loan restructuring plan.

Sri Lanka’s debt problems are partly because it has built infrastructure such as a port, airport and road networks using Chinese loans, but the projects are not bringing in money .

The government released its statement a day after Chinese Ambassador to Sri Lanka Qi Zhenhong said China is doing all it can to help Sri Lanka. Qi scoffed at suggestions Beijing is putting Sri Lanka in a debt trap.

“Western developed countries, especially those who colonized Sri Lanka in history, should also come to help,” Qi said in a tweet from the Chinese Embassy.

“The debt trap is just a myth, intentionally created and exaggerated by some foreign media and politicians,” Qi said. He said China was neither the biggest nor the only lender to Sri Lanka and Beijing’s projects were provided on concessional terms.

Japan, the World Bank and the Asian Development Bank are other big lenders, having started the process of helping the Sri Lankan economy long before China.

Qi said it was “unrealistic” to expect all projects or loans to be flawless.

Central Bank figures show that existing Chinese loans to Sri Lanka total around $3.38 billion, not including loans to state-owned enterprises, which are counted separately and considered large.

Godahewa also said the Cabinet has approved a plan to offer residency visas of up to 10 years to foreigners who buy apartments in the country costing at least $75,000 and those who deposit more than $100,000 on properties. local bank accounts.

He said the offer was made to help the construction industry overcome the economic crisis and to attract more foreign currency.