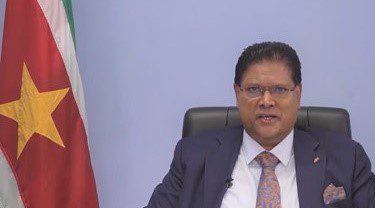 Suriname’s government has broken its silence over allegations it signed a multibillion-dollar loan deal with an Italian building and construction company last year amid criticism from opposition lawmakers.

The government of President Chandrikapersad “Chan” Santokhi is said to have sought a loan agreement with the Italian company MAEC 87 SRLin case talks with the International Monetary Fund (IMF) fail.

“This is completely far from the truth. The intention of this loan was never realized, so the financial transactions never took place. During this period, it was a possible loan option of two billion US dollars at an interest rate of 0.5%. However, this never took effect,” the president’s office said in a statement.

In April last year, the IMF announced that it had concluded a three-year, US$690 million program under the Extended Financing Facility (EFF).

Opposition lawmaker Rabin Parmessa told parliament last Friday that the government had secretly entered into a US$2 billion loan deal with MAEC 87 SRL, against any government’s rules for acquiring such loans. from the Dutch-speaking country.

According to the memorandum of understanding, the loan would benefit a limited company, Surfin NV, created by the government, which would be used to carry out development projects.

Parmessar told parliament that Surfin NV apparently does not exist because it is not on the register of the Chamber of Commerce and Industry.

According to the letter, the loan is a “private loan facility” for financing development projects to be carried out by Surfin NV in Suriname. The loan has an annual interest rate of 0.5% with a term of 20 years. It has a grace period of five years.

For the loan, Surfin NV opened a bank account with the Federal Reserve Bank of New York in New York.

But in a statement, the government claimed that the National Democratic Party (NDP) led by former President Desi Bouterse presented a confidential memorandum of understanding from January 2021, falsely giving the impression that it had contracted a two billion dollar loan and that the funds have since been transferred to private accounts.

The government said many unfavorable loans at high interest rates had been taken out by the previous government, referring to the Oppenheimer loans amounting to US$675 million with an interest rate of almost 13% .

He said that as a result, Suriname found itself in a situation of default, a situation in which creditors were told they could not repay. The heavy debt burden is the origin and fundamental reason why the country is currently going through a financial and economic crisis.

The creditors have expressed their willingness to discuss with the current government, but on condition that an IMF program is launched.

The government said at the time that there was still no idea of ​​the outcome of the IMF option, adding “so it was important to have a fallback in case the program failed. of the IMF”.

The statement adds that in this context, President Santokhi has appointed a committee of government ministers to explore debt restructuring options, with the aim of reducing the level of interest rates from almost 13% to manageable proportions. .

To this end, confidential talks and negotiations have been held with various national and international parties in a transparent manner involving the Central Bank of Suriname.

According to the government, the loan would be used to repay part of the existing loans as well as to raise funds for the management of the assumed financial debt, the reduction of poverty and the stimulation of investments in the manufacturing sector.