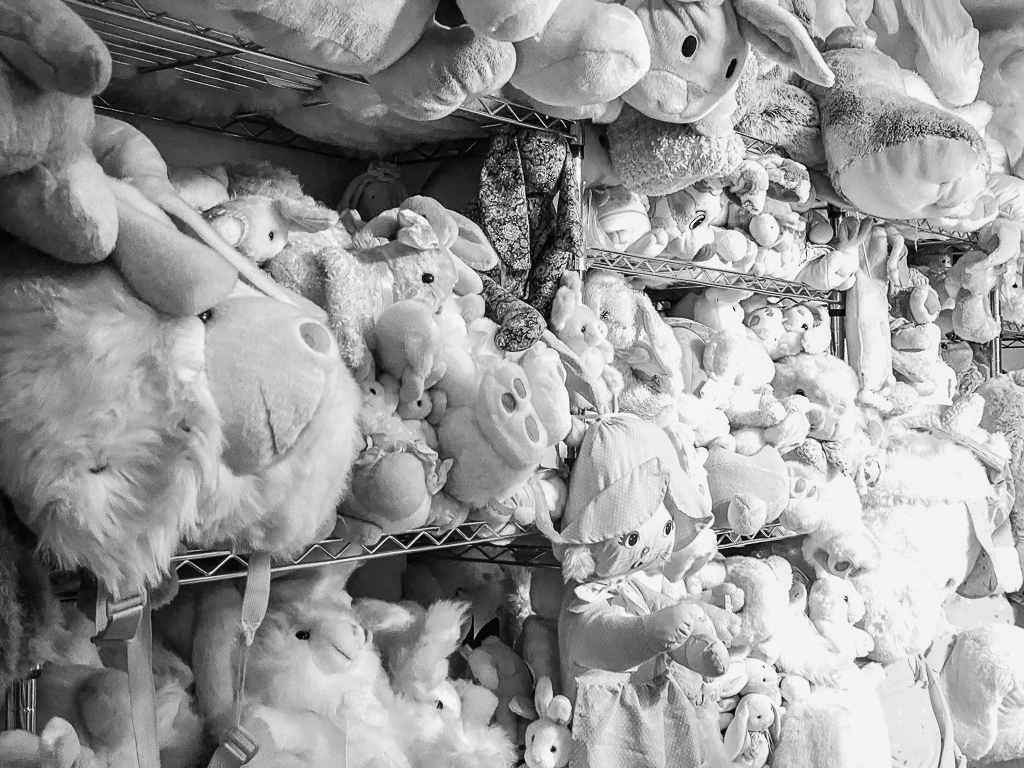 Nestled among the hills of northern Altadena is one of Los Angeles’ most fascinating museums. An attraction for animal lovers and lovers of the unique, The Bunny Museum, co-founded by Steve Lubanski and Candace Frazee in 1998, has the world’s largest collection of rabbit-themed objects. Their assortment consists of more than 44,000 pieces, each remarkably different from one another.

Being an animal lover myself, I naturally had to pay a visit. I approached the building and immediately was confronted with a huge inflatable rabbit that adorns the roof of the museum. The white balloon was surrounded by other rabbits, including three old rabbits from the Rose Parade and a colorful mural decorating an entire wall. I admired the exterior of the building, but I was quickly surprised by the appearance of a little ginger cat. This new companion was one of the museum’s many residents, named Dash.

The collection originally started as a tradition in which the couple exchanged rabbit-themed gifts as an expression of love. Initially, the museum was also their common home; However, the collection became so extensive that they moved to larger premises in the upper part of Altadena. Many items, including the ornate figurines that adorned their wedding cake, are dedicated to their undying love for one another.

I soon approached the main entrance and, holding my breath, crossed the threshold of the small foyer. What I encountered far exceeded any previous expectations I had ever had.

Every square inch as far as I could see was piled up with objects, large and small. Stacks of tottering bunny figurines were clustered in huge glass cabinets to my left, and a wall adorned with the signatures of famous former visitors stood right in front of me. I was greeted by Frazee, who was seated at a small desk to my right, almost obscured by the huge piles of bunny postcards, figurines, and figurines among the rest.

I was so surprised by the immensity of this fraction of the complete collection that I almost didn’t see Samantha, who was waiting for me right behind a bookcase filled to the brim with items for sale. We exchanged remarks on the surprising vastness of the assortment, and continued down the hall.

A large display case contained hundreds of small porcelain salt and pepper sets, and an entire wall was filled with items dedicated solely to rabbit-related food items. It was in this section that I discovered the existence of Nesquik lip balm, which they had a set of three flavored. A short walk away was the Rabbit School exhibit, which featured four rows of glass shelves, depicting many small rabbit figures taught by a rabbit teacher, along with miniature whiteboards.

Much of the Bunny Museum is dedicated to exploring the relevance of rabbits to popular culture and history. The museum’s Gallery of Original Bunny Art, or GOOBA, is an installation that features the work of a range of contemporary artists, including Teresa Blatt, Sylvie Lake, Dennis Chin, Lucile Littot, Silvano Possenti and the founders, Lubanski and Frazee themselves. The mediums used range from painting to sculpture, including edibles.

Among the many exhibitions is 1993, an exhibition dedicated solely to the works of Frazee. In order to commemorate the museum’s original location in Pasadena, Frazee compiled her art from reused or broken objects once on display. The couple initially placed damaged pieces that can no longer be displayed in what they have titled The Garden of Broken Dreams. These rabbits are now on display again through an innovative new art form.

Rabbit-inspired art, however, dates back thousands of years. Another installation, antiquity, contains pieces from as far back as 300 BC These fascinating artefacts turned out to be one of the highlights of our visit. Old rabbit-themed objects were enclosed in a large glass container. A Roman bronze ring, estimated to be around 300-200 BC. AD, is included. The exquisite piece of jewelry is accompanied by a pendant and a brooch, among others.

We traveled further into the museum and entered a secluded room from the main gallery. It contained an entire wall dedicated to cartoon characters, including the beloved Bugs Bunny and Roger Rabbit. Even the ceiling was covered with posters of rabbits, slippers, puzzles, and stuffed animals. It was in this room that we were greeted by many other feline friends, all eager to accept scratches and pets.

From there, however, our visit took a darker turn. The Hops Chamber of Horrors, prohibited for children under 13, is a hugely important exhibit illustrating the abuse and mistreatment of rabbits in many industries. In a sickening reminder of the excruciating nature of animal cruelty, the exhibit touches on many topics that are more relevant than ever.

With all certainty, I can say that The Bunny Museum is a fascinating place to escape the troubles of reality. In all its quirky charm, it offers an experience you will certainly not forget. The couple’s welcoming attitude really makes the museum feel like a home away from home and promises an enjoyable experience for every visitor who arrives. The Bunny Museum is truly “the most hoppy place in the world”.