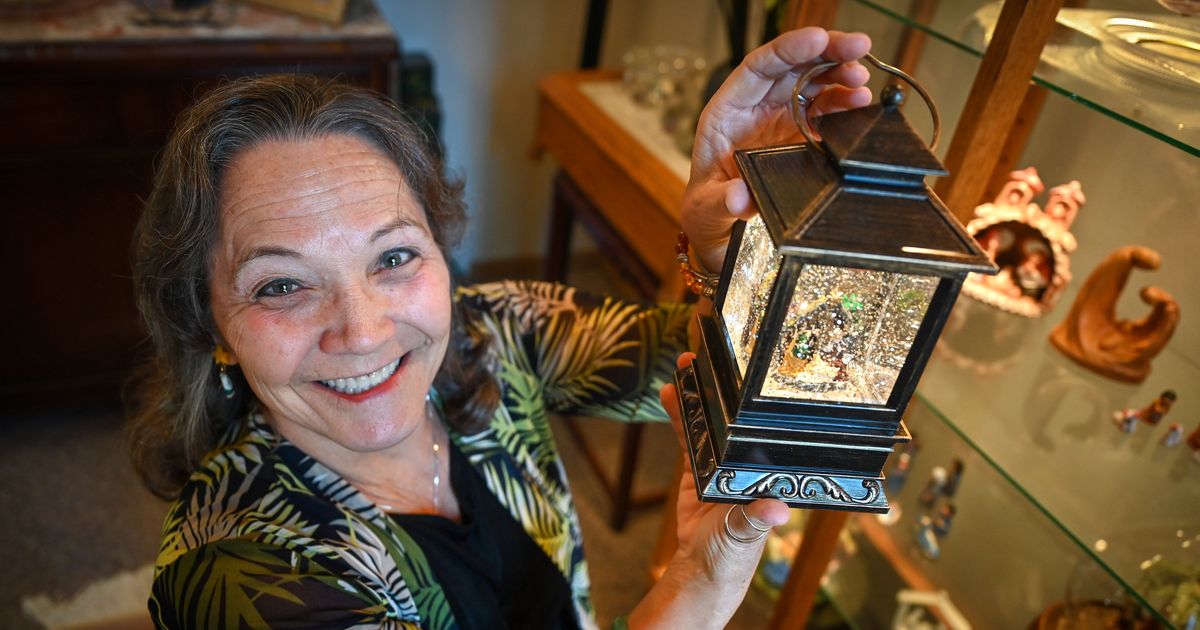 The Collector: The Nativity Collection Keeps the Christmas Spirit Alive All Year Round

Christmas is still three months away, but the sense of celebration is never far from Connie Christilaw’s mind.

She collects Nativity sets – 65 to 70 of them at last count and she displays many in her house all year round.

When she was growing up, her family manger scene featured Joseph, Mary, and the baby Jesus with blond hair and blue eyes.

“I started to realize that other cultures did them so differently,” she said.

As a religion major at Whitworth University, she purchased a small wooden nativity scene for her dorm. Its blocky figures and primary paint colors suited its space.

After graduating as a deaconess nurse, she joined the navy and served 13 years.

“I wanted to see the world,” Christilaw said.

And she did, discovering unique nativity scenes in every port.

She pointed to a nativity scene made from a carved monkey pod.

“I learned that in Okinawa,” she said. “It was made in the Philippines.”

This set is what inspired her to start collecting them.

She still has the Nativity from her college dorm and the one from her family home, but the others were given to her by friends or she picked it up on her travels.

“The only duplicates I have are two made in Peru from matchboxes,” she said. “Most of my collection is very small because I was traveling.”

The tiny painted matchboxes open to reveal the figures of Mary, Joseph, Jesus and the Three Kings. Even smaller is a pewter thimble his sister-in-law bought him in England. A small swing door opens to reveal the Holy Family.

But this is not his smallest nativity scene. This honor goes to the pendant she wears around her neck. She even has nativity earrings.

“I didn’t look for them,” she said of her collection. “I just ran into them.”

Connie Christilaw has quite an extensive collection of nativity scenes, including this matchbox-sized display. Most are quite small, and she started collecting when she was in the Navy, traveling around the world. It has more than 60 nativity scenes from all over the world and shows many different cultural representations and styles. (Dan Pelle/The Spokesman-Review)

For example, a pair of china glass globes have nativity scenes painted on the inside.

Then there is his favorite; a Nativity scene nestled in a fragile jeweled goose egg adorned with faux pearls. It appears to be modeled after a Fabergé egg.

Even more special, an exquisite nativity scene nestled in an abalone shell.

“It’s the last one my mother gave me before she died.”

The Boyds Bears Ceramic Nativity is not something she would have bought for herself.

“My friends gave it to me, one piece at a time,” Christilaw said. “It represents a school’s passion game. It’s so complex!

When her best friend’s mother passed away, she asked Christilaw to get the family Nativity set. The pearly blue figurines were made in Greece and include a culturally authentic depiction of the Magi known as Balthazar.

“Balthazar was black,” she said. “Often it is missed.”

It is the uniquely portrayed centuries-old history that grabs his attention.

There is an African wooden nativity scene surrounded by a tree stump fence. Lambs’ woolly coats are made from jute wrapped around their wooden block bodies. It has Peruvian gourds adorned with the nativity scene and a pottery version with a llama instead of a lamb near the baby Jesus.

“Their faces are Inca,” she said, pointing to the Holy Family.

Although she does not actively seek to add to her collection, her volunteer work at Providence Sacred Heart means that she often browses the gift shop.

She held up a recent addition, a lit lantern with snow floating around the nativity scene.

She’s glad she doesn’t have to wait until December to revel in the wonder of the Christmas story.

“Variety is what makes me happy,” Christilaw said. “And remember who gave them to me.”

Celebration and Catastrophe in the Ceramics of Diego Cibelli