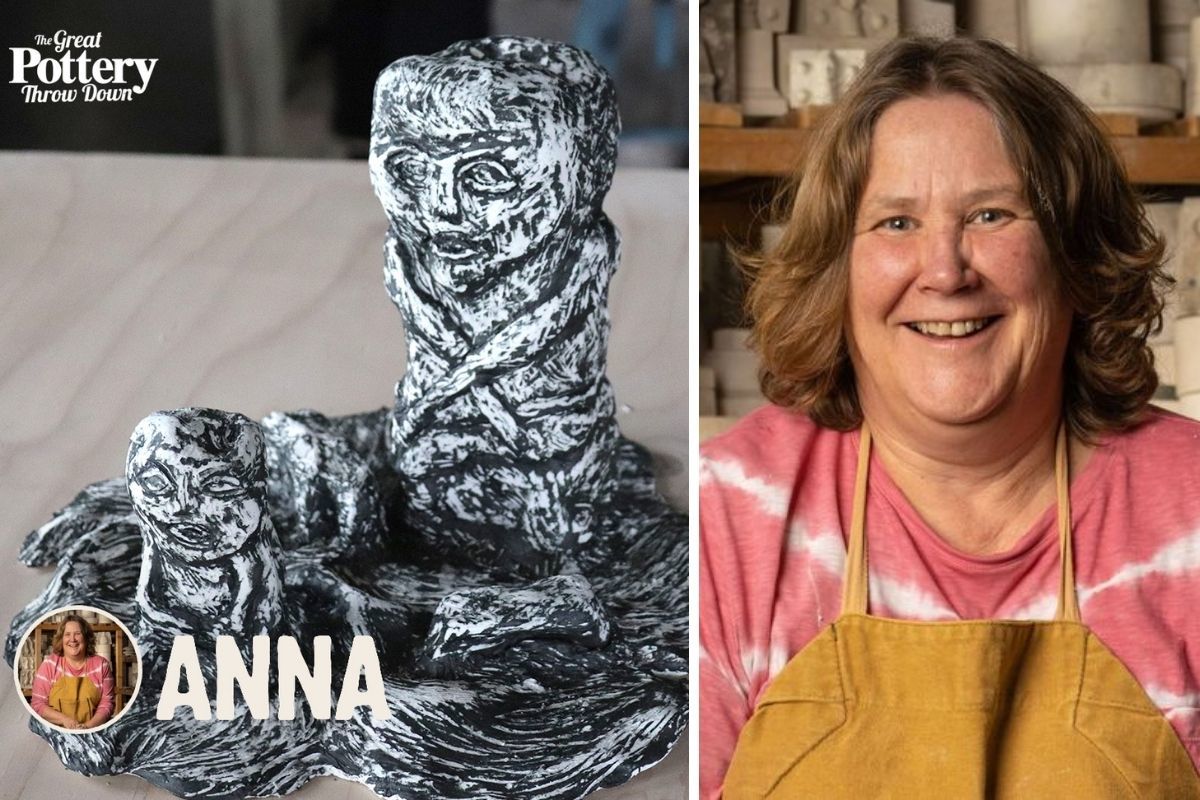 A Fermanagh woman has taken inspiration from her home country to show off her skills in new series The Great Pottery Throw Down.

On Sunday night’s show (January 16), for their “main crafting” challenge, the potters of The Great Pottery Throw Down were asked by the judges to build and hand sculpt an inanimate object, an ode to their hometown using porcelain paper clay.

Speaking about the inspiration behind her ‘ode to her hometown’ sculpture when it was made on the show, Anna said: “Down the island of Boa, where I come from, there is a small cemetery called Caldragh Cemetery and Caldragh means pagan in Gaelic.

“And on it there are two stone carvings that have been there for over 2,000 years and look like they are keeping the secrets of the tomb, it’s an amazing place.”

“The Secret Keepers” created by Anna McGurn during the ode to your hometown challenge on The Great Pottery Throw Down.

Using the pinching and rolling skills, Anna created miniature versions of the stone carvings, which were then underglazed. It was her decorating skills that earned her high compliments from the judges.

“One thing you definitely have in the buckets is atmosphere,” said judge Rich Miller, who then commented on Anna’s “really effective decoration.”

Judge Keith Brymer Jones echoed that, saying, “That swirling pattern that you managed to get with that ground and the grass, those rocks sticking out of the dirt, it’s really, really nice.

“You have really succeeded with your talent as a decorator,” he added.

Posting a picture of herself standing next to one of the stone carvings in Caldragh Cemetery, Siobhán said: “I visited this Janus stone in Fermanagh last year on #exploringNI

I visited this Janus Stone in Fermanagh last year on #exploringNI Anna did very well. Like all of them. Well done Nick and thanks for the bants Josh. #PotteryThrowdown I can’t wait for next week @PotteryThrow https://t.co/Mo3W6RYXPy pic.twitter.com/lvjMMVU0f2

Following her success in Episode Three, Anna will return to our screens on Sunday evening (January 23) at 7:45 p.m. for Raku Week of The Great Pottery Throw Down on Channel 4.

Anna McGurn from County Fermanagh takes part in The Great Pottery Throw Down.

Anna, who comes from a generation of farmers and spent her childhood harvesting crops and raising cattle in Fermanagh, lived and worked in Africa for years where she met her partner Skip. Back home in Northern Ireland, she works with adults with learning difficulties by offering creative workshops.

It is through her work that she discovered a passion for pottery. She explains: “My interest started where I work, when it was decided to open a ceramic workshop with adults with learning disabilities. Although not directly involved, I was fascinated.

“I talked to my partner Skip a lot about this and came home on a Friday to find that he had made room in his shed and fitted it with a pedal wheel… that’s how it all started .”

Commenting on her time filming The Great Pottery Throw Down, Anna said: “It was great fun, it was a huge learning curve and my first instinct was fear, but after I started and being absorbed in what you do, it’s okay and you realize it’s hard in a good way.

“It was like an adventure that you didn’t know the end of, so the best thing to do was embrace it in all its madness.”

When asked what she would take away from her experience on the show, Anna replied, “That I am and always will be a messy potter, despite the fact that I can create very cool things, I think that gave me a sense of self-confidence.

“It targeted what I want to do and it allowed me to develop my skills and recognize that I am quite good at sculptural and figurative work.

“Self-confidence and a bit of bravery are things I will definitely take with me,” she said.