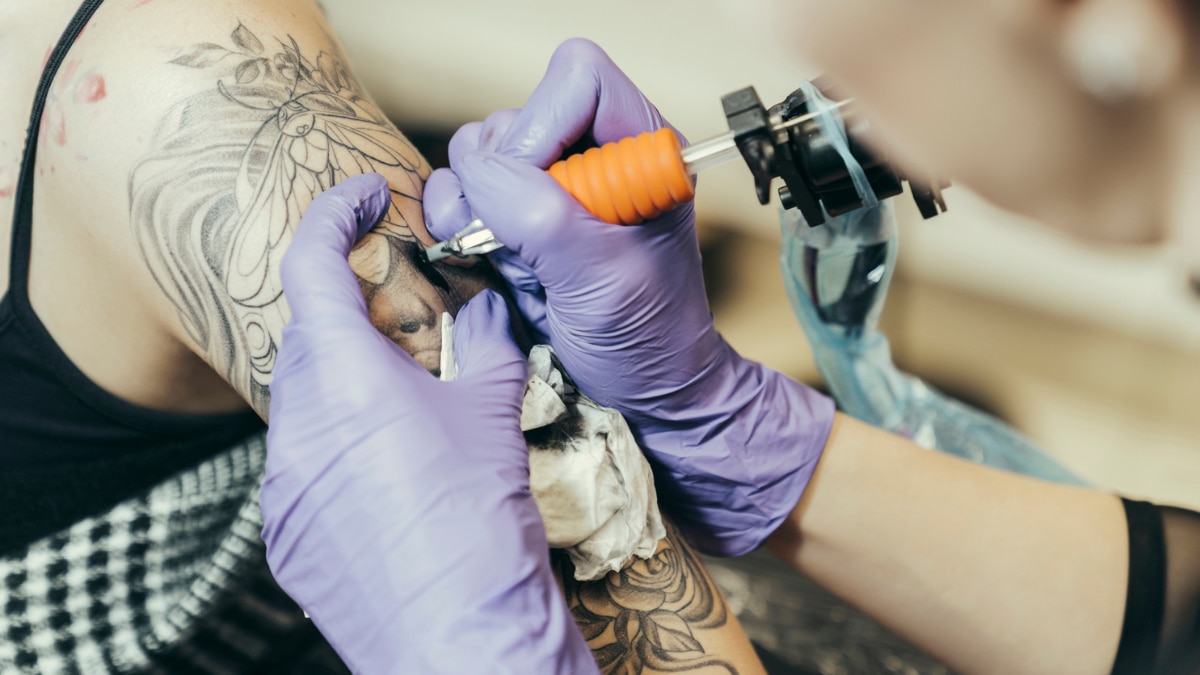 In a large warehouse-turned-studio in Madrid’s Vallecas district, 33-year-old artist Ana Rodríguez (@Polvo_eres) traces the silhouette of a horse to the child she has tattooed on her leg with her fingertips left.

“This was made for me by a friend and is one of my favorites.”

Ana studied fine arts in Mexico and Spain. She has been in the world of tattooing for over 10 years and notes that one of the styles she most admires in art is that of her little nephews.

Ana belongs to a generation of tattoo artists who broke away from the traditional style in search of “freer” designs. In the Instagram portfolios of these artists, aggressive lines predominate, full of spikes and thorns, but also, as in Ana’s case, more cute, even childlike illustrations.

“My clients tend to be, first and foremost, non-binary people, women, and people of color.” She is developing a project called Black and Brown are Beautiful, in which she rejects the idea that you cannot tattoo color on dark skin.

Ana’s eyes are made up with double black lines. There are a few little gems stuck to her lower eyelids that crinkle every time she smiles. She talks passionately about her influences and the artists she admires, such as Rita Salt or Simon Hanselmann. She is fascinated by porcelain figurines, fantasy toys where she once worked, Eastern European cartoons and comics.

Alternative artists, like Jim Woodring, are the backbone of many of these new tattoo artists. One of the most influenced by Woodring is Ramón Duerto (@nadabien), 30, one of the most popular tattoo artists beyond the underground scene. He made drawings for the Carolina Durante group and, recently, for the cover of Facendera, the first novel by the poet Óscar García Sierra.

At Casa Antillón, a collective studio and art space in Madrid’s Carabanchel district, Duerto walks past a large swing and tables covered in scrap leather. He reaches his office, where sketches of cows, angels and elves await him. Among his references are illustrators Michael Deforge and Jesse Jacobs, although his first tattoo was “the lyrics to a song by American rap duo Mobb Deep.”

One of Duerto’s first clients was his mother. “I made a star on her wrist with a sewing needle and ink. Now she has both arms covered and wants me to tattoo a dragon on her leg.

Duerto alternates tattooing by machine and by hand, or handpoke, a technique often mistakenly confused with a style: “You can tattoo the same thing using one technique or another”, he specifies.

A few co-workers from the workshop approach asking for help with an airbrush. Ramón takes it gently and looks at the machine through his little round glasses. Without saying much, he rummages through his tattooing tools, disassembles one of the devices, pulls out a tiny piece and gives it to his companions. “It should work.”

Duerto talks about “unconventional tattooing”. He and Ana underline the importance of the Ignorants, a movement born from the need to break with the standardization of graffiti, which developed in the world of painting and fashion, to finally settle in the field of tattooing .

Nowadays, young people are looking for more meaning in their tattoos. They have their favorite artists, who use the empty skin to set up traveling art galleries.

“What’s happened to tattooing is that it’s become a very innate art,” says 27-year-old Leopoldo Mata (@le__polo). “Many creative disciplines have become more flexible over time, but tattooing has been more stagnant. We’ve been tattooing sailors or Japanese letters for years… [things] it had nothing to do with our culture.

Mata studied at the Faculty of Fine Arts in Cuenca, cradle of artists who, among other things, are dedicated to unconventional tattoos. After leaving university, he moved to France and made tattooing his life. He found a good niche of customers in a Facebook group of Spaniards in Paris.

“I drew blanks, sentences, everything they asked me… I learned a lot and thanks to this experience, I realized what I didn’t want to do.”

He then started creating less conventional designs, uploading them to Instagram and tattooing whoever wanted to do it on his skin. He traveled the world and saw how his style of tattooing was better received in London, Germany and the United States than in Spain.

“I really like the world of tattooing but it doesn’t fill me with everything I need…it’s hard for me to change, evolve and try new things without losing the taste of the public .”

How to style your powder room