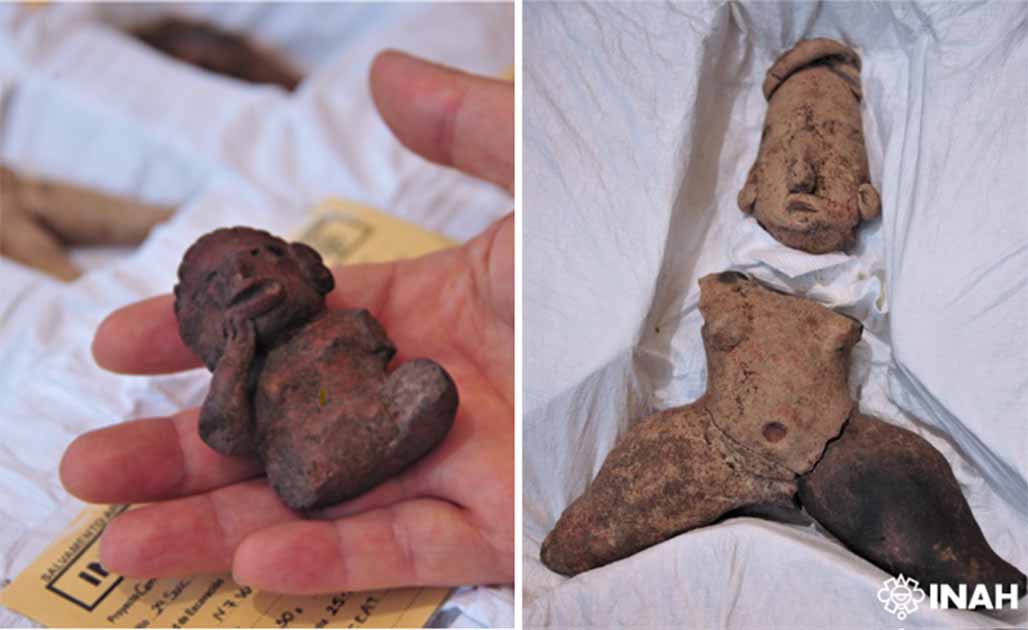 Mexican archaeologists have discovered a layer of otherworldly tools, utensils and figures in an ancient ceramic layer. For more than three thousand years, the artifacts lay untouched below the surface of the forest, though hundreds of thousands of people passed over the fragmented ceramic vessels and human figurines every day. Now, the site turns out to be among the oldest in the Mexico Basin.

The Chapultepec Forest (Chapultepec Forest) in Mexico City is one of the oldest urban forests in Latin America, with several ancient sites dated to the Middle Preclassic period (1200-600 BC). The forest is managed by the National Institute of Anthropology and History (INAH), which recently announced that researchers from the Archaeological Recovery Center for Environmental Culture have made a “3,000-year-old discovery”.

Broken, fragmented, but no less revealing

Archaeologists discovered the layer of broken ceramic fragments less than one meter (3.28 feet) below ground, near the Xochipilli fountain and Composers Avenue in Chapultepec Forest.

Ancient remains include broken and deliberately burned clay vessels and abstract human figurines. The researcher said that, so far, the dig has been “transcendent in content”. In addition, the recovered objects have “doubled the temporality of human settlement in this area, bringing it to more than three millennia”.

A rich layer of deliberately broken ceramic artefacts discovered in the Chapultepec Forest will be a treasure trove of information about the Preclassic period (Mauricio Marat, courtesy INAH)

Professor María de Lourdes López Camacho was the project manager. She said the archaeological layer was identified just 700 meters (2,296.59 feet) from the Zacatenco site. Discovered in 2018, this preclassic village site is located at the foot of the homonymous hill and flourished at the height of Teotihuacan between 225 and 550 AD.

The research team first dug a 2 x 2 meter (6.56 ft) square test trench in a sparsely wooded area. Dr Camacho said the recovered artifacts were all found within an area of ​​38 x 24 meters (124.67 x 78.74 feet). Archaeologists first identified a “ceramic floor” made up of clay fragments that had been “intentionally broken up and exposed to fire”, writes López Camacho. The researcher added that it was ‘surprising’ to consider how many generations must have passed here [the park] over the past three millennia.

The plump, dwarf-legged people of Chapultepec

Among the finds were sharp flint tools, arrowheads, revolving spirals and an antler awl, all of which showed signs of significant wear. This means that they were functional rather than ritual tools. Hundreds of broken plates were collected and analysis revealed zoomorphic and anthropomorphic figures and faces. One of the most commonly depicted forms, according to Dr. Camacho, was “plump-legged women and dwarf legs.”

Dr Camacho says the area is “non-floodable” and water is supplied by rivers from the Sierra de Las Cruces. These two qualities make the territory “an ecosystem conducive to the development of pre-urban cores”. The new findings mean that Chapultepec was among the first inhabited places in the Basin of Mexico. Professor Camacho believes that these findings will ‘open new avenues for studies of the formative period’.

Around 5300 BC, in what is now Mexico, people began successfully harvesting maize (maize), and by around 1500 BC families had begun farming around and living in sustainable villages. It was during this time that agriculture boomed, seeing the cultivation of squash, beans, peppers and cotton, a time known to archaeologists as the Early Formative Period (1500–900 BC). It was at this time, when new agri-deities were worshipped, that the temple-pyramid became a central architectural feature.