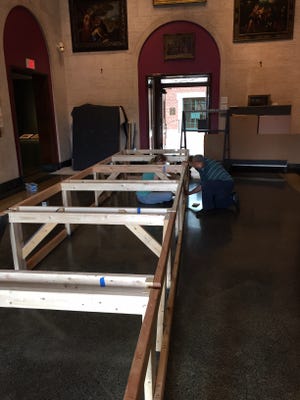 The reflection on conquest and consumption arrives at WCMFA

This month I thought it would be fun to take you behind the scenes of the recently installed exhibition. Bouke de Vries: War & Parts.

Bouke de Vries is a Dutch artist, currently based in London. He started with a career in the fashion industry and went on to study ceramics conservation. His work, literally piecing together history as he mends broken objects, has led him to consider questions of value – the types of things we keep, the types of things we collect, the ones we throw away and the how the answers to these questions change or stay the same over time.

The figures in War & Parts stage a metaphorical battle between sugar, porcelain and plastic. Six sculptural groups clash amid piles of porcelain shards, while the center of the table features a mushroom atomic explosion studded with symbols of compassion and sacrifice, a moving consideration of the toll of fighting, as the battle rages on. which unfolds below prompts questions about consumerism, waste, and our accumulation of material objects, be they porcelain figurines or plastic toys.

Our goal was to install the exhibit in time for the museum’s 90th anniversary, September 16, and it was a challenge.

The work was shipped to us in three crates on September 10 from its previous location. When a museum receives works of art, they remain in the crate for at least 24 hours to acclimatize to the new environment. Although museums have fairly rigid and consistent temperature and humidity standards, slow and gradual changes in temperature and humidity are preferable to rapid changes. Allowing items to crate in the new environment helps prevent items from reacting to climatic fluctuations.

When we got to work the following Monday, the first order of business was to assemble the table that supports the installation.

The table is actually a series of six 4-foot platforms supported by a frame. Once the table was put together, much like a giant construction set opened on Christmas morning, it required caulking, patching and painting. Cosmetic touch-ups at the table took another day.

Fortunately, the installation itself was relatively straightforward – the sculptural groups descend in size from either side of the mushroom cloud, forming a visually balanced composition. Fragments of porcelain, large and small, were then used to create the battlefield and unify the composition.

Finally, the cutlery has been placed. De Vries designed his own plates and cutlery for the table, with plates depicting Mars, the Roman god of war, and Minerva, the goddess of wisdom and art.

Even the cutlery matches the theme of conflict and spectacle – his Kalashnikov cutlery features gold-plated bronze forks and knives in the shape of AK-47 assault rifles.

The sum of the parts is a sculpted post-apocalyptic battle that becomes the centerpiece of a space inspired by the history of European banquets.

This confluence of past and present invites us to reflect on our history of conquest and consumption while contemplating our present. However, it remains above all a visual treat. It will remain on view in the museum’s Schreiber gallery until March 13.

Originally commissioned by the Holburne Museum in Bath, England, in 2012, War and coins has traveled throughout the UK, Europe and Asia. The North American Tour of Bouke de Vries: War & Parts was organized by Ferrin Contemporary Gallery in North Adams, Massachusetts.

11 incredible home products you wish you could buy sooner