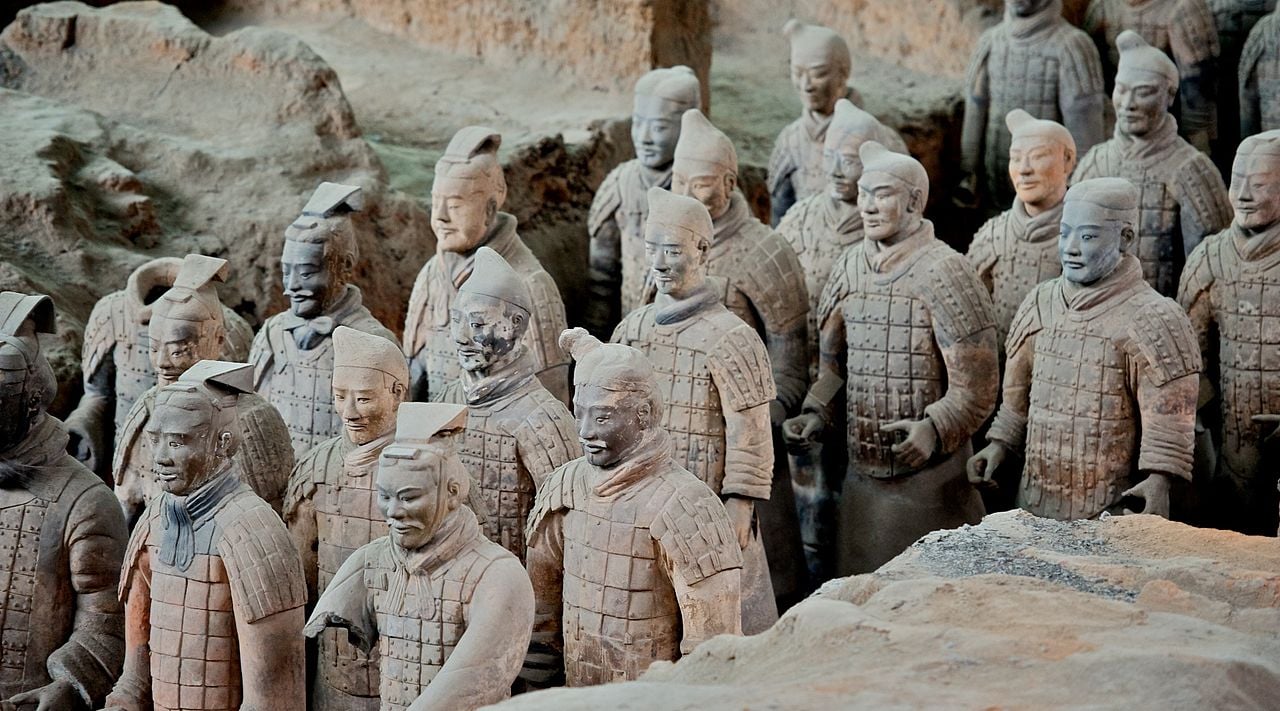 By Johanna Hanink and Felipe Rojas Silva, Professors of Classics and Archeology at Brown University

The results suggest the presence of “Westerners” in China as early as the 3rd century BC. BC, during the lifetime of Qin Shui Hang (259-210 BC), the first emperor of China.

It happened just as surprising new claims were being made about Emperor Qin’s own tomb in Shaanxi province – the tomb most famous for its buried ranks of some 8,000 earthen warrior sculptures. life-size baked.

Claims of the influence of Greek art on China

In a BBC article, archaeologist Li Xiuzhen said the many sculptures found in and around the tomb – including the Terracotta Army, but also sculptures of musicians, dancers and acrobats – were “inspired by ancient Greek sculpture and art”.

The supposed “Greekness” of the Terracotta Army went viral, but archaeologists in China (and around the world) were skeptical and dismissive. Two weeks after the story broke, Zhang Weixing, director of the Emperor Qin Shi Huang’s mausoleum site museum, told AFP that there was “no substantial evidence” of contact. between the ancient Greeks and those responsible for the Qin tombs.

Li Xiuzhen even backtracked, protesting to Xinhua News Agency, China’s largest state-run news agency, that his words had been taken out of context. “Terracotta warriors,” she said, “may be inspired by Western culture, but were made only by the Chinese. She also told Xinhua that her ideas were distorted after being placed alongside those of art historian Luckas Nickel, who speculated that “a Greek sculptor may have been at the site. to train the inhabitants “.

Why were Xiuzhen’s comments so controversial?

For centuries, archaeologists and art historians have been eager to see the imprint of the Greeks in works of art and architecture around the world. But this view rests on a Eurocentric logic that has long assumed that other civilizations were fundamentally incapable of creating highly technical, impressive and aesthetically pleasing works of art.

The best and the only way?

In the West, classical Greek art and architecture are often presented as a singular achievement. The Greeks are credited with inventing forms and techniques that were ahead of their contemporaries. A commonly cited example of ancient Greek genius is the crowding of columns on Greek temples such as the Parthenon. Built with a slight concave curvature, they use an architectural trick that creates an optical illusion of tall, straight columns. (Columns actually constructed without curvature will appear convex.)

Entasis actually appears in early architectures around the world. Despite this, at the start of the 19th century, some Europeans took its presence in early Japanese temples as “proof” of Greek influence on Japanese architecture.

Other famous Asian works of art have also been attributed to the Greeks. The notion of “Greco-Buddhist art” was coined to explain the pleasing proportions and elegant poses of the sculptures of ancient Gandhara (in present-day Pakistan). The only way to explain their sophistication, Europeans believed, was the influence of Alexander the Great and his retinue of talented Greek artisans who came to Gandhara at the end of the 4th century BC.

Art historian Michael Falser recently showed how the concept of Greco-Buddhist art, or Buddhist art with a Greek “essence”, is actually a colonial notion that arose during British rule in India. In the West, examples of this art (represented largely by sculptures of the Buddha) have since been widely interpreted as the result of Greek influence – and therefore, implicitly, as an early example of successful European attempts to civilize it. East.

Do not give credit where credit is due

Throughout the 19th and 20th centuries, explorers and anthropologists also explained exotic foreign customs through the prism of Greek traditions. They attributed to the Greeks an old Chinese custom of burning the offerings of friends at the funeral pyre of the deceased. Meanwhile, they claimed that the household organization among the Circassians, an ethnic group on the northeastern Black Sea coast, was inspired by the Greeks.

Likewise, travelers and archaeologists have often fallen back on theories of direct external influence. How else could they explain the sophisticated artistic techniques and engineering genius among “primitive” societies?

In 1871, German explorer Karl Mauch, in search of the biblical region of Ophir, discovered the ruins of the capital of the Kingdom of Zimbabwe, which had flourished from around the 11th to 15th centuries. Certain that no African people could ever have built such wonderful structures, Mauch vigorously publicized Great Zimbabwe as a city built by the biblical Queen of Sheba. This, he said, was her Ophir, the source of the gold she sent to King Solomon (the proverbial “Ophir’s gold” in the Bible) for use in the First Temple in Jerusalem.

A century later, some scholars have come to doubt that the Olmecs, whose civilization flourished in parts of Mexico and Central America 3,000 years ago, could have created monuments as spectacular as the Colossal Heads. stone from central Mexico. Ironically, these scholars sought to explain the sculptures by postulating pre-Columbian contact not with Greeks or Biblical rulers, but with Nubians and other African peoples.

The costly mirage of Western influence and Greek art

Whenever we say that the cultural achievements of other societies are due to geographically distant – but familiar – genius and inspiration, there is a cost.

In the cases of the Terracotta Army and Great Zimbabwe, European scholars have struggled to understand non-European architectural and artistic achievements without resorting to the explanation of ancient Greek or Biblical civilizations. This kind of thinking has also projected modern European tastes on Chinese and African antiques. Greek statues, so coveted by museums and collectors today, also had to be what China’s first emperor wanted for his own tomb (at least that’s what you think).

This mirage of ancient global cultural influence is having an impact. This makes us forget the diversity of places to which many turn for inspiration and validation. Erased are the original ideas and the stories of belonging. Transcontinental traffic in the ancient world allowed Chinese silk to reach Roman Palmyra (in modern Syria). But would it make sense to explain this ancient capital as the product of an ancient Chinese genius?

As a thought experiment, it is worth considering a striking reversal of the familiar bias. In the summer of 1668, an Ottoman traveler from Istanbul named Evliya Çelebi arrived in Athens. Like Mauch in Zimbabwe, Çelebi was not too impressed with the contemporary indigenous inhabitants he encountered, infidels with “300 houses of idol worship”.

Surely the Greeks could not have built such a wonderful city, Çelebi said. In his “Book of Travels”, Çelebi followed the precedent set by “all Christian and Coptic chroniclers”: he attributed the founding of Athens to the prophet Solomon and, like Mauch in Zimbabwe, to the Queen of Sheba.

This article is republished from The Conversation under a Creative Commons license. Read the original article.