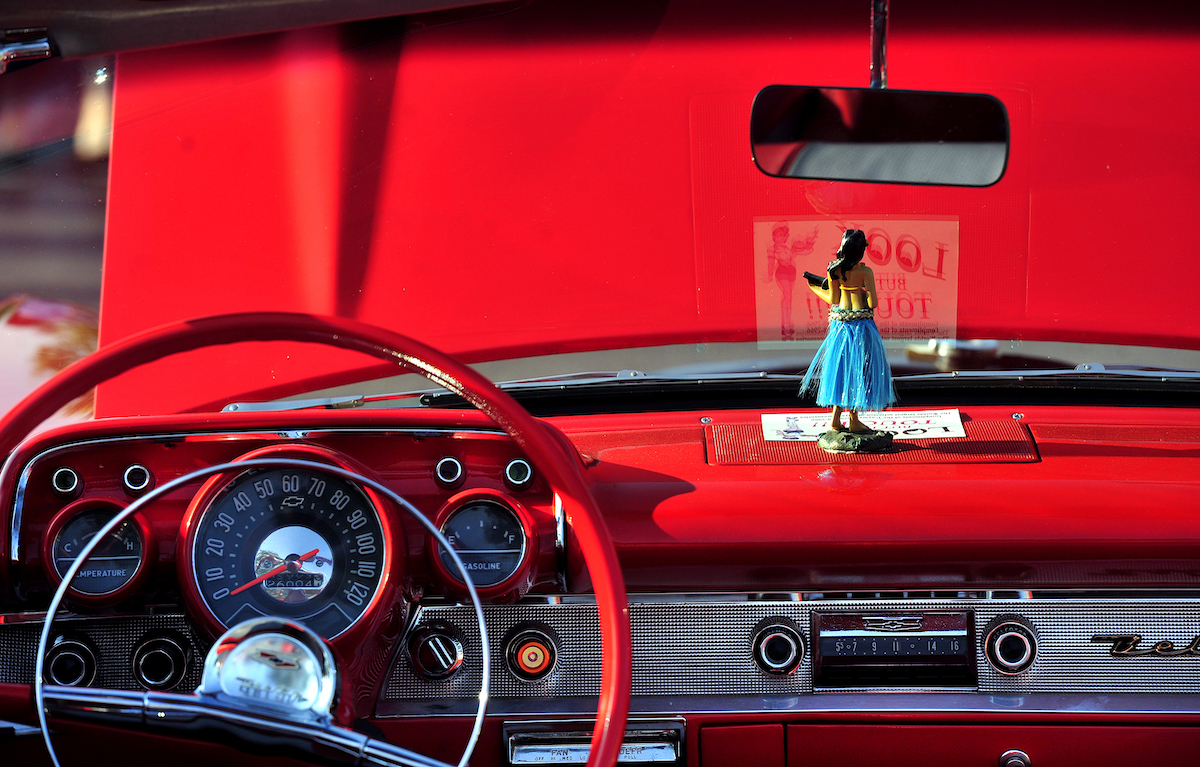 This car accessory started out as a war memento

Are you looking to customize your car to make it look like you? Many people add practical accessories like steering wheel covers or air fresheners that also add a touch of personality. If you want something fancier, consider a hula doll. This vintage dashboard accessory is sure to catch the eye.

Imagine driving down the road with a retro-style hula doll swaying to the motion of your car. It’s one of the most iconic dash ornaments you can choose from to personalize your ride. And like fuzzy dice, these tiny dancers have an interesting war history behind them.

According to Planet Retro, Hawaii was a popular tourist destination in the early 20th century, and hula dolls were an equally popular souvenir. They were small, easy to pack, and very reminiscent of the exotic – and still somewhat mysterious – islands they came from. Most of these tiny dolls were made of unglazed bisque porcelain and were carefully hand painted before donning grass skirts and fabric collars.

After Japan attacked Pearl Harbor and the United States entered World War II, many American servicemen spent time on the Hawaiian Islands. And like tourists before them, many servicemen have chosen hula dolls as war souvenirs from the islands. They were also popular gifts for family and friends back home.

In fact, these tropical figurines have become one of the most popular souvenirs always during and after the war. Many Americans had at least one of these dolls decorating their car dashboard or a shelf in their home.

Creation of the dashboard hula doll

By the 1950s, popular Hawaiian dolls had received a dash-friendly makeover. Instead of using breakable bisque porcelain, makers switched to plastic and added spring-loaded legs that allowed the hula dolls to move their hips as they traveled down the road. A strong magnet inserted into the base allowed car owners to attach the figures to vintage metal dashboards.

Hula nodders were particularly popular with surfers and the California beach crowd, but the craze quickly spread across the country. Erie Insurance reports that these tiny dancing dolls became iconic car accessories, and everyone wanted one to decorate their dashboard. In an ironic twist, factories in war-torn Japan began producing the popular Hawaiian dolls to meet growing demand.

You can still see them on the dashboards

A smiley part of American pop culture, these classic car accessories still wiggle on dashboards. But now they are attached with double-sided tape instead of magnets. Some are even solar powered to keep them dancing even when the car stops. Sometimes they even inspire a complete tropical transformation of a vehicle.

In a world of practical car accessories and high-tech gadgets, it’s comforting to embrace a bit of nostalgia and retro style. Unusual accessories, like a dancing hula doll, give a car personality and help it stand out from the crowd. They’re also a great conversation starter at the local auto shop or burger joint.

For those brave enough to add one to their car, these Hawaiian-inspired figures still dance down the road patting their hair or playing the ukulele, delighting with their vintage charm.

RELATED: Here are some great gift ideas for car lovers

25 Ideas for Cool Water Features for Your Landscape