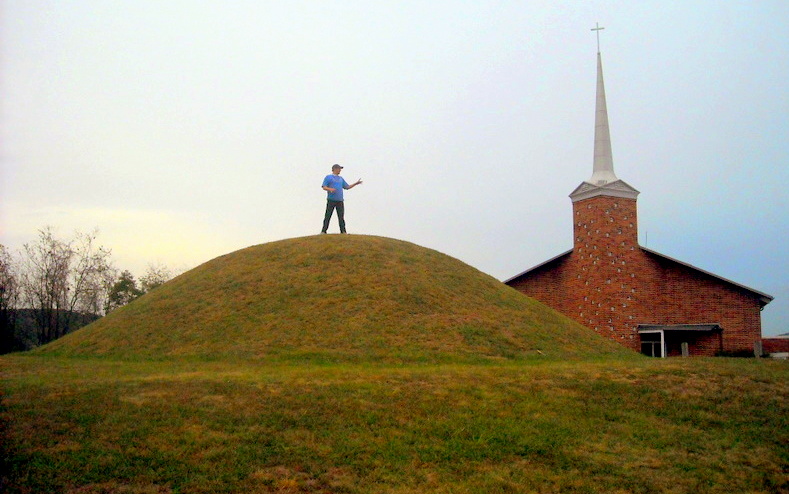 The term “mound builder” is often used to describe two ancient cultures that archaeologists now know as the Adena and the Hopewell. These peoples lived in eastern North America from around 500 BC to 500 AD. Their monumental earthworks captured the imagination of explorers and continue to fascinate us today. .

Many mounds remain throughout West Virginia and can be found in every county. The largest conical burial mound in the United States is, in fact, located in West Virginia.

Here are three facts about mound builders in West Virginia that many people don’t know.

1. The tallest conical burial mound in the United States is in West Virginia

The Grave Creek Mound in Moundsville is believed to have been built around 300 BC during what archaeologists call the Early Woodland. It was originally at least 70 feet tall and, according to one sourcemay have required its builders to carry three million baskets of earth.

It has recently been explored using non-invasive remote sensing techniques including drone photography and ground penetrating radar. According to archaeologist Alexander Corkum, the first time this method was used in the United States was during a pioneering survey at Grave Creek. Another archaeological first for West Virginia! Although it was first used at Stonehenge, the stunning results were modeled by Jamie Davis and can be seen here.

2. West Virginia Has Played a Leading Role in Modern Archeology

The first Europeans to explore the continent found it hard to believe that “savage” Native Americans, as they called them, were responsible for the mounds and earthworks they encountered. So they came up with outlandish theories about giants, Aztecs, Viking explorers, and lost Hebrew tribes to explain their origins.

Evidence has since ruled out their conjectures, although these beliefs have proven dangerous to Native Americans. For example, Andrew Jackson used the idea that Indigenous peoples had exterminated a once powerful race to justify racial policies such as Indian Removal Act. The same pseudo-science is evident today in ancient extraterrestrial theories, which continue to disregard the amazing achievements of indigenous peoples.

Fueled by these controversies, early archaeologists developed scientific techniques that allowed them to conclusively answer questions about mound builders.

Here in West Virginia, modern archeology was born during their stratigraphic excavations and through their detailed measurement of mounds, comparisons between ancient and modern artifacts, and a comprehensive analysis of all earthworks across the continent.

As early as 1894, Cyrus Thomas Report of the Bureau of Ethnology refuted exotic mound-builder myths, and archaeologists still use the 1848 work today”Ancient Landmarks of the Mississippi Valley” by Edwin Davis and Ephraim Squier as a basis for their understanding of American prehistory.

West Virginia figured prominently in these early works, and its rich archaeological heritage still contributes much to American archaeology.

3. Mound builders liked to use exotic materials like copper and mica

Early archaeologists found amazing works of art and rare materials when they opened up mounds. The Adena and Hopewell cultures are known for their statuettes, copper jewelry, elaborate pottery and delicate mica carvings.

Some of the materials must have been traded over great distances, indicating that they had a sophisticated economy and were tied to cultures across the continent. High-quality artwork also shows that their society was wealthy enough to support artists and other skilled artisans.

Archaeologists don’t fully understand whether the people buried with these grave goods were political leaders, shamans, or both. It is likely that exotic art and materials were both status symbols and had religious meanings. Copper and mica were difficult to acquire, which would have made them desirable “luxuries”. Yet they were also beautiful and reflective, which might have reminded indigenous peoples of the invigorating sun or the mysterious surface of water.

According new search by archaeologists at Ball State University, copper was both desirable for everyday tools and for sacred objects that were gifts from supernatural beings, such as the underwater panther depicted in the Panther Petroglyph on display at the Tu-Endie-Wei State Park in Point Pleasant.

Rare and mysterious diamond discovered in 1928 in West Virginia

Diamonds don’t occur naturally in West Virginia, but one of the largest ever found was accidentally discovered in a horseshoe pit in Monroe County in 1928. Geologists still don’t know how it got here , although the speculation never died out.

The Punch Jones Diamond, also known as the Horseshoe Diamond, remains the largest alluvial diamond ever discovered in North America and the third largest found in the world. Read the full story.

Sign up to receive a FREE copy of West Virginia Explorer Magazine in your weekly email. Sign me up!