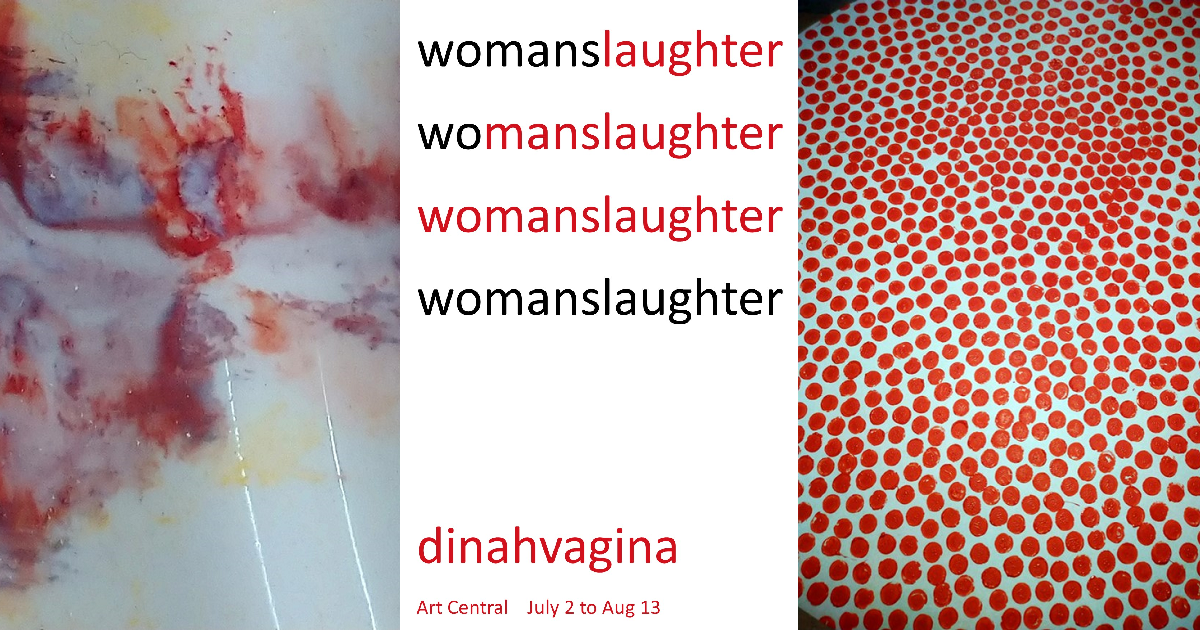 A new exhibit is due to open next weekend inspired by a quote from Margaret Atwood who said what men fear most from women is being laughed at and what women fear most men is that they kill them.

Artist dinavagina has been part of her work to depict the number of female victims of femicide (a woman or girl killed by a man because of her gender) and to find meaningful ways to show the scale.

Whether it’s dots or buttons or small pieces of ceramics, labels, flags, maps or photographs, she takes very seriously the duty to make a physical mark to represent each woman victim of violence. a femicide.

Every name – at least three a week – every place, cause and date of death counts and is recorded where possible.

For her latest exhibition, titled ‘Womenslaughter’, she drew these marks from meticulously collected data which can be found in the Femicide Census, a unique source of information on women who have been killed by men in the UK and the men who killed them.

This data comes from a small dedicated team that sends freedom of information requests to all police forces in England and Wales, coordinated by Karen Ingala Smith – director of Nia, an organization that aims to end violence against women and children, and founder of Counting Dead Women.

The grim but essential task that created the first such record aims to contribute to the improvement of knowledge, strategies, policies and practices, to raise awareness among the people and models involved and to provide a solid and tangible resource for academics, advocates and the media.

Despite regular promises, government commitments, strategies and pledges, these women must continue to matter, continue to make their mark, and it remains work that demands and deserves attention.

Individually, simultaneously, Dinah and Karen keep count, regularly name the women, and have found ways to organize the never-diminishing numbers to ensure they are not overlooked.

“womanslaughter” which opens at Art Central Gallery, Barry on July 2 and then runs through August 13, is described by the gallery as a comprehensive selection of work, including a large number of new pieces that add to dinah’s vital collection.

Known for her difficult and controversial subjects, Dinah is not shy about tackling ethical and moral issues.

After spending a decade documenting the impact of male violence on women, where men kill those who love them, Dinah confronts and counters the violent climate in which women live with her outspoken activism, advocacy and his questioning of norms.

In Welsh towns, Dinah called out the names of murdered women as a spectacle; around her on the floor were many handmade ceramic female figurines.

The use of domestic objects, such as furniture, utensils and books in the exhibits, aims to show the fragile boundary between domesticity and violence, which for many women and children, the home is not a safe place.

According to ONS figures for the year ending in 2021, around a third of adult female homicide victims are killed by partners or ex-partners, almost half (49%) were killed in a domestic homicide, while among children the most common suspect was a parent or step-parent (42%, 25 offences).

Her previous exhibition, ‘Manslaughter’, featured, among innovative and beautiful counting mechanisms, handmade ledgers, recording the loss of women’s lives and their stories, which are currently on tour in Scandinavia.

From 1980 to 1997, Dinah could not read at home. In December 2015, coercion and controlling behavior became a criminal offense in the UK with a prison sentence of up to 5 years or a fine or both.

But dinah loves to read and as part of this exhibit, she will be at Art Central from 9:30am to 4:30pm on July 29 to read to herself, read to visitors, listen to visitors read to her, or just sit together and read.

She invites viewers and readers to come anytime, and says she will have books for all ages with her, books she loved, books she read to her children.

Between 9:30 a.m. and 3:30 p.m. on August 6, she will be on hand as a “wish administrator”, helping to process wishes, promising “No wish too small or too big”. Don’t tell anyone, just come to Art Central and your wish will be fulfilled.